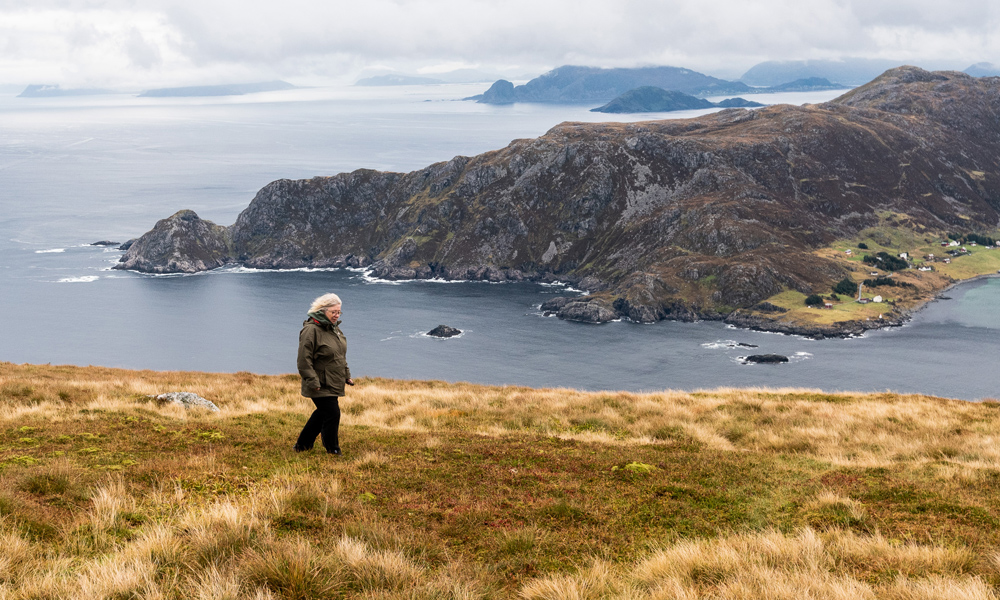 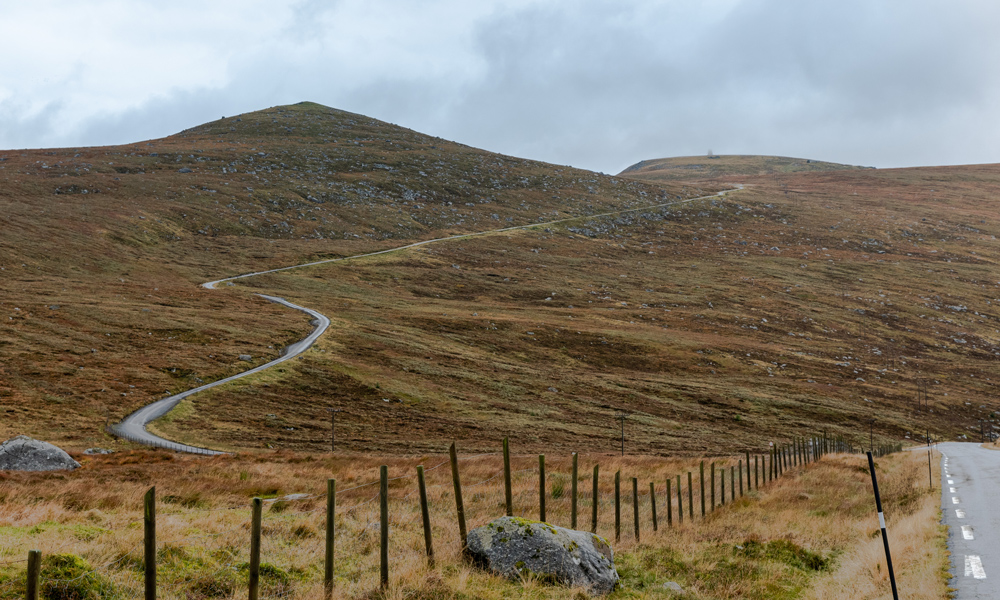 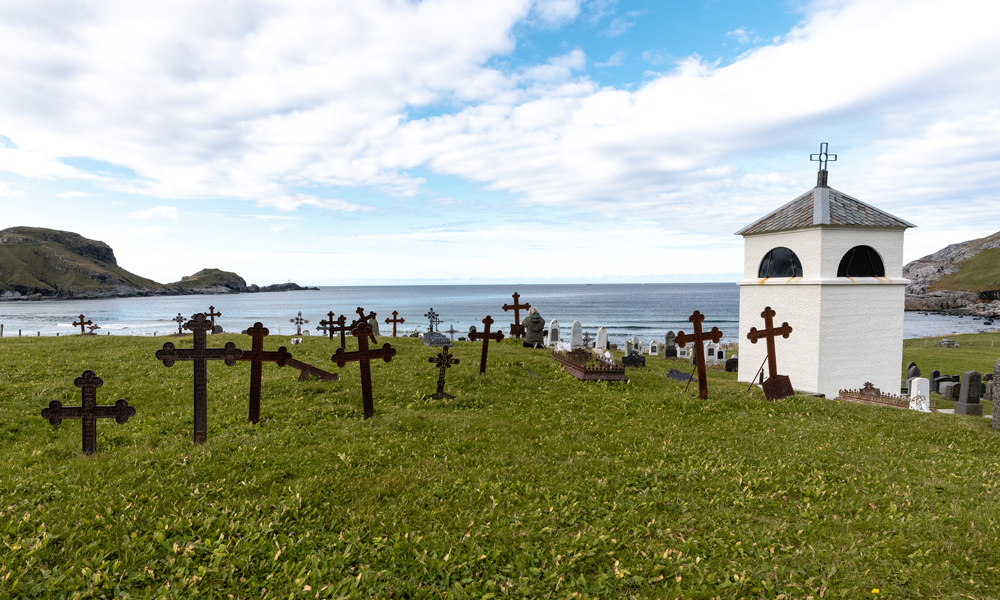 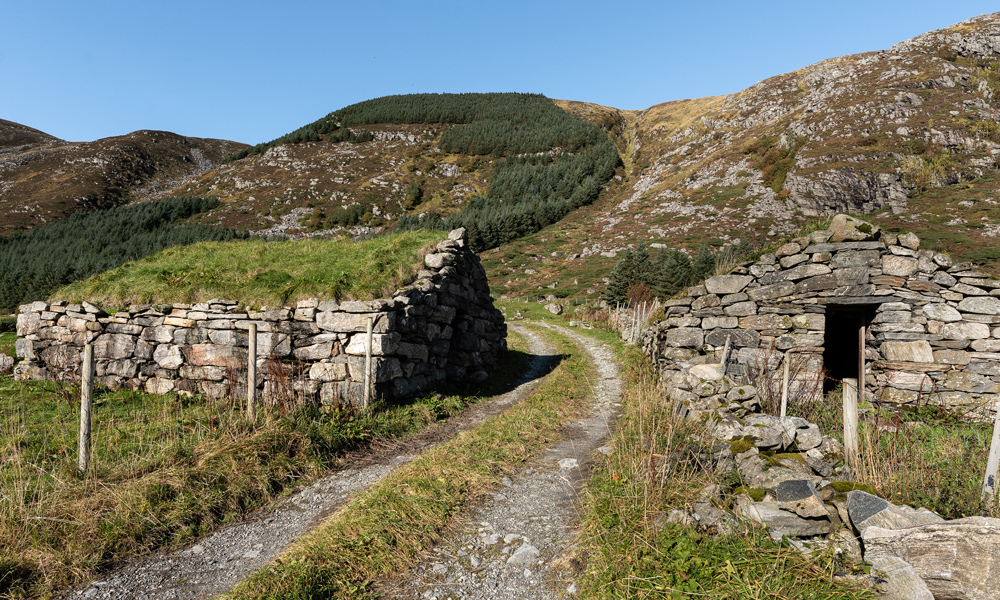 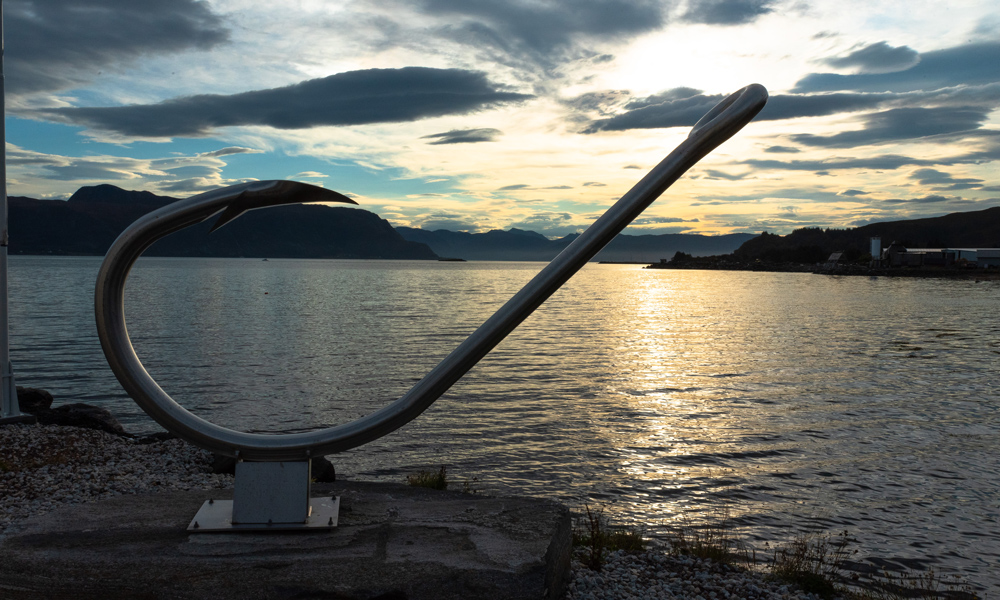 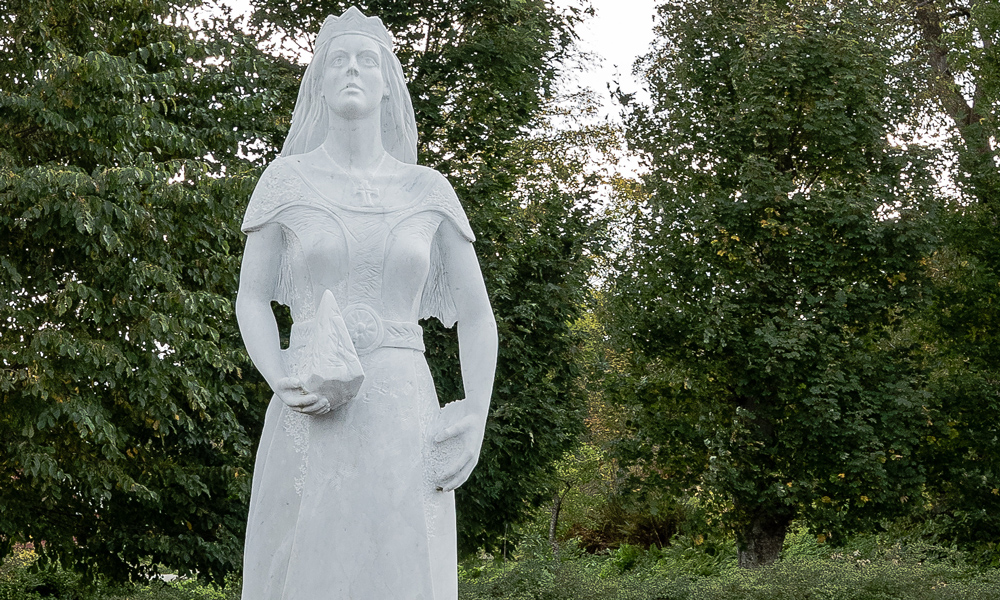 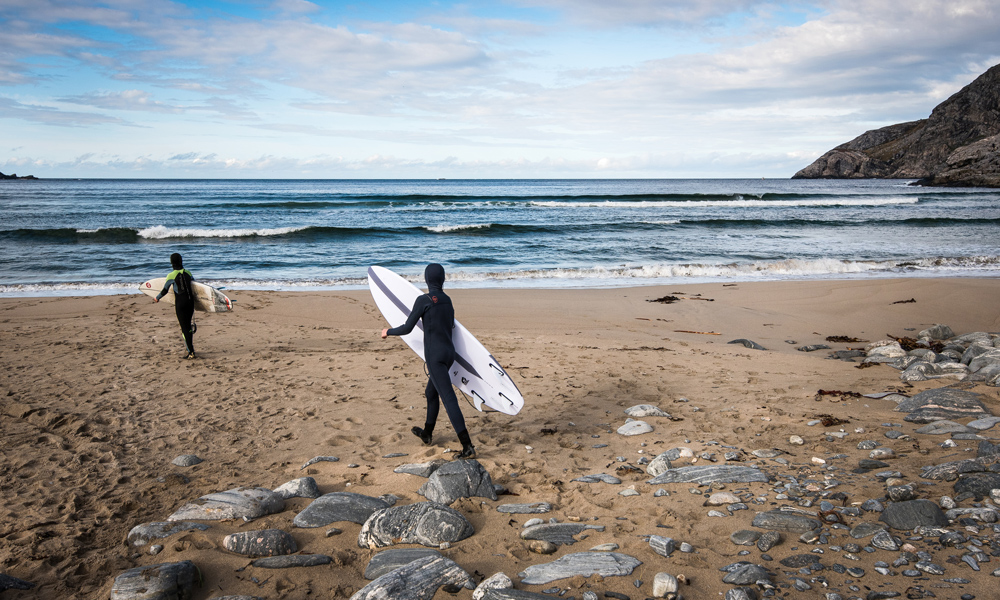 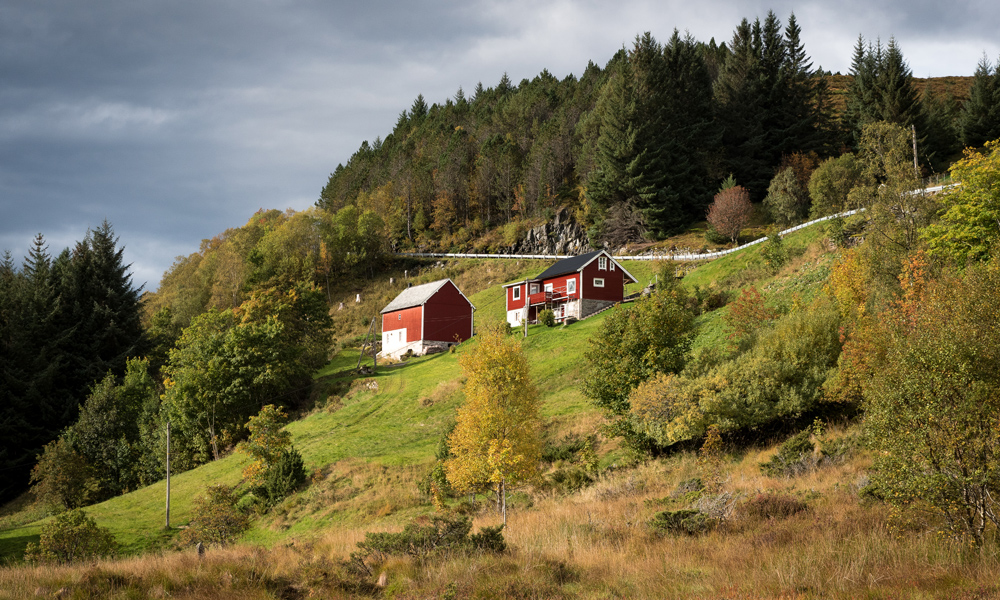 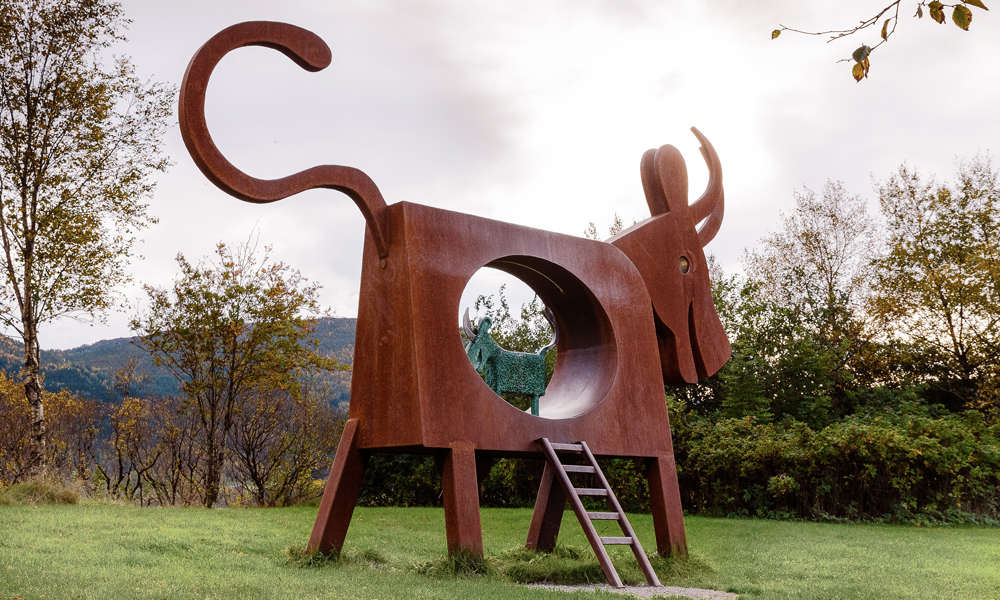 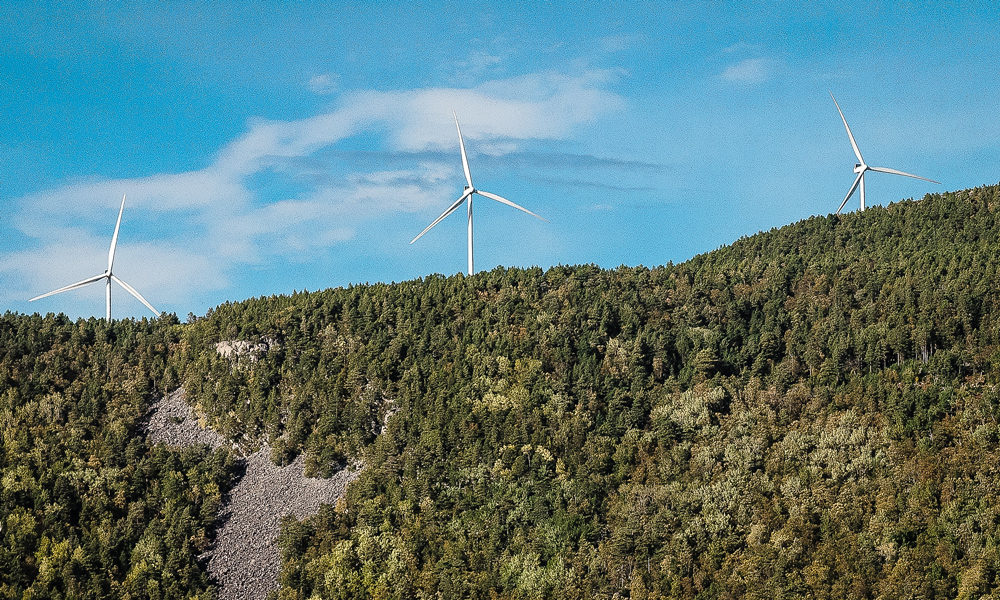 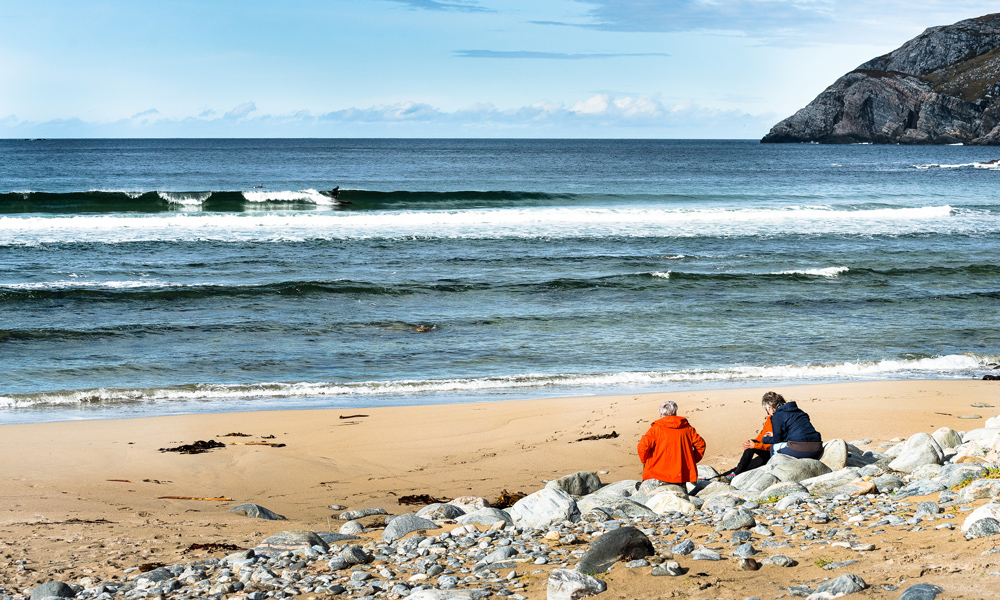 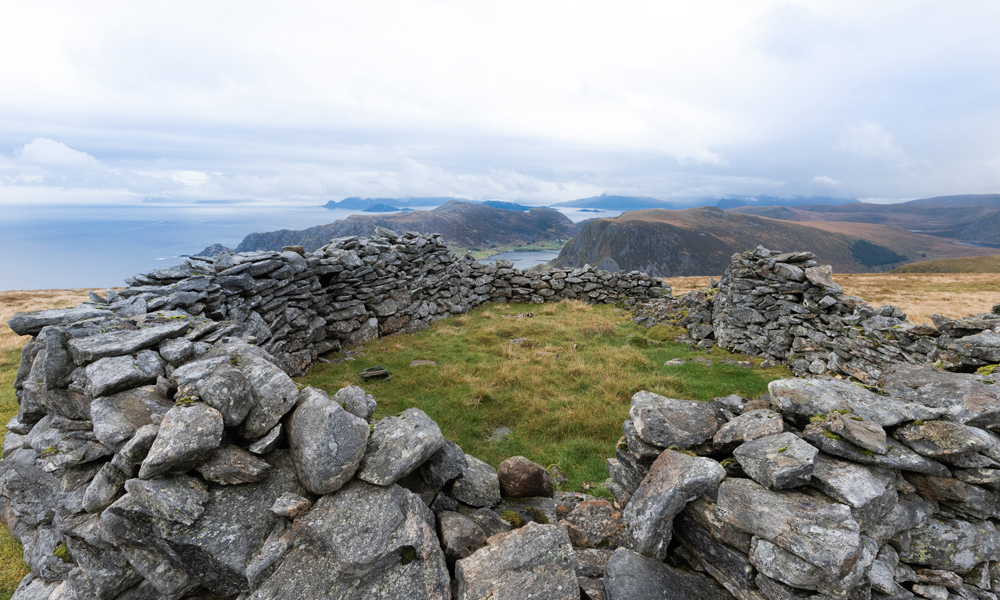 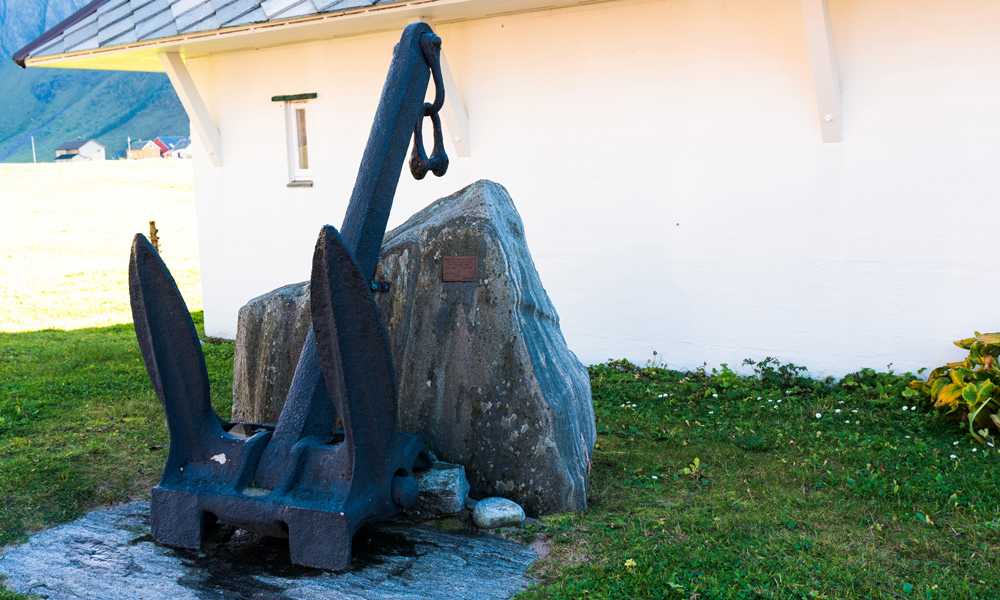 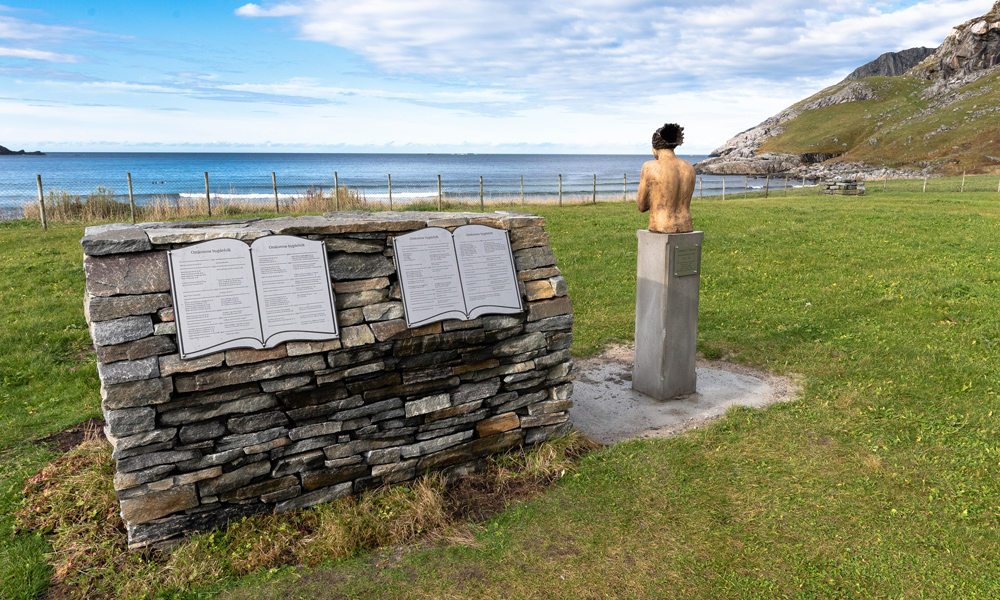 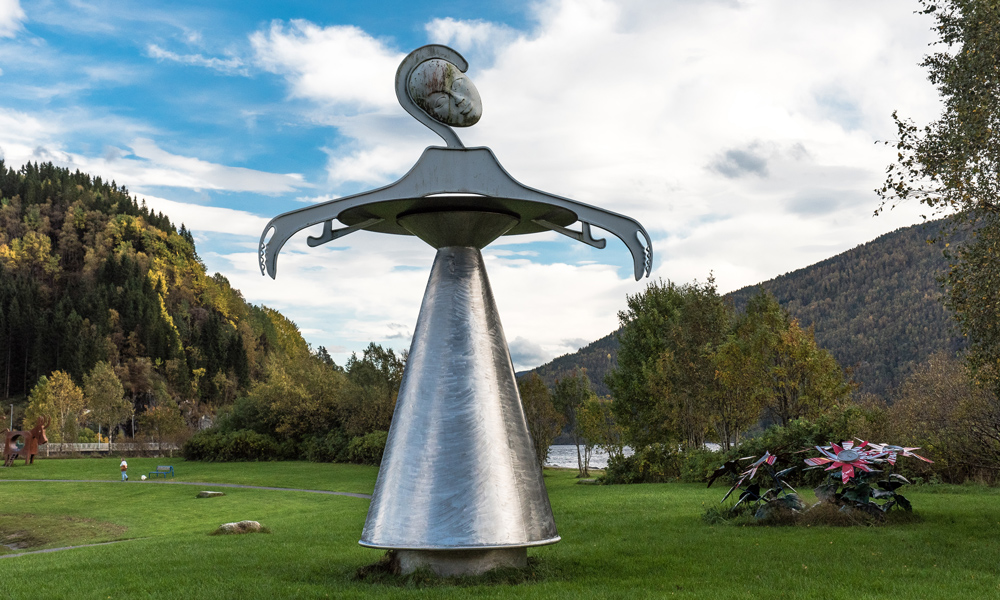 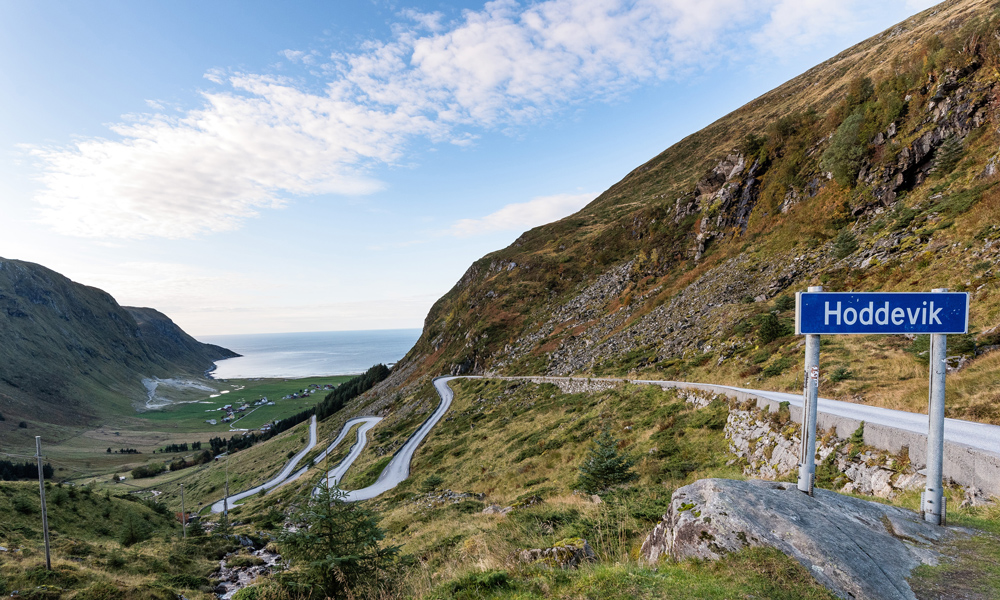 Quiet before storm at Stad

Travel reports from Norway
All Norwegian weather forecasters - regardless of channel, report one or more times per. year; Full storm at Stad. We had to settle for soft sand between our toes and a sun-warmed breeze from the west.

The corona year taught us to look for pearls within our own borders, to look at selected small pieces of the map of Norway and to gather experiences in the near unknown. We replaced the Danish, French and German with the Norwegian in a roundabout in the northernmost part of Vestland county with start and income in Førde in Sunnfjord. Neither young nor well-adults will be bored on an educational journey with the ocean and contemporary art as the extreme.

Towards the open sea

Mainland Norway and the newly created Vestland county ends at Stadlandet, the threshold to the open sea. We have turned off from the busy E39. The road builders kept to the minimum width when they made their way out to our turning point in the northwest. We plotted in Ervik, Hoddevik Leikanger /Honningsvåg on the GPS for company sake, but no one is driving with only one way to choose from.

When you upload for an excursion into the unknown, expectations and images are formed for your inner eye even when the journey begins and ends in your own county. If you say Stad, ship disasters, howling winds, roaring waves, sea eagles, surfers and selfies will immediately appear at sunset.

Stadlandet is world famous for its two sandy beaches Ervik and Hoddevik. The roads there are an experience in themselves. The beaches attract both surfers, photographers and meditators all year round. Foreign enthusiasts combine passion with work at Stad Hotell in Leikanger. The play on waves and boards has become so popular that wild camping created challenges for local health authorities in the corona year, but the visitors also create income and activity. The surf school teaches freshmen both tricks and respect for giant waves and insidious undercurrents.

We who prefer windbreaks to wetsuits do not travel in vain to the sea. We say at low gear up the narrow path to the top of Kjerringa or Vestkapp, 497 meters above sea level and the westernmost mountain plateau in Norway. Above our heads a spherical radar that collects weather data. Down towards the edge of the cliff, fitters fix a telemast. The larger society expects crews to climb to the top so that the telecommunications systems always work, regardless of the weather. Even a gentle breeze from the southwest tears well in a hat and jacket where we pull through wind-hardened grass down on the ground floor.

The traces of the last war are clear where we enjoy the view of the horizon, of Scotland or America and a seductively flat sea. The Germans set up a cannon position on the plateau, and Russian prisoners of war fought to the death at this strategically perfectly placed facility. The Russians and other prisoners of war have been honored with a chapel in the cemetery in Ervik. The rest of the cemetery there is also worth a quiet moment. Crosses and stones are testimonies of drama, longing and families' work at sea.

In Ervik there is also a memorial dedicated to those who lost their lives when the DS "Sanct Svithun" sank on September 30, 1943. The ship was attacked by British bombers. The locals managed to save 76 people in the storm while 47 people died, 35 Norwegians and 12 Germans.

But people in Stadlandet also know that the sea can benefit those who dare. People learn to think big when they settle down with a view to infinity. Visions, knowledge and the will to win are linked to a fundamental belief in local resources in the broadest sense. Ervik Havfiske Holding AS is one such example. The group collects income from the major banks around the globe and employs over 400 people in a conglomerate of 30 different companies, including hotel operations in a new building and a beautifully restored boathouse.

Ship through the mountains

Seafarers take their precautions when a full storm is announced at Stad and the waves are as high as multi-storey houses. But new times await when the world's largest ship tunnel opens. Think of it, ships as large as the Hurtigruten can sail through the Black Mountains. Many in the west have for a lifetime been rock solid in their belief in the project. Just as many have blown off the whole thing. Now we know that faith can move mountains. The Storting put the first tunnel millions in the pot in the 2021 budget.

Stad ship tunnel, value creation in Utkant-Norge and another attraction to the region will be added. The project will cost around NOK 3,5 billion. - You do not get much metro in Bergen or Oslo for such a modest sum, we say aloud as we scout out idyllic Kjødepollen where the ships in a few years will disappear into the black mountains.

Westerners enjoy proclaiming by voting that it is in the West that the real values ​​of the nation are created. Oil and gas are extracted from the seabed, salmon are raised in the fjords and heavy industry - as in Svelgen, supplies the world market with demanded raw materials. Billions to the Treasury. And now society at large is calling for more energy, electricity for emission-free electric cars and buses in the cities and even more electrical remedies in the thousands of homes. Westerners step in. Wind turbines pop up in the western Norwegian mountains. Income to landowners. Cheers and division in small communities. Visual littering. Technological advances. See and think, we say.

The journey of formation in the westernmost wound sprouts to far-reaching reflections for the short-distance tourist. He and his entourage belong to the generation that eventually admits that one should take better care of the planet. Our way home passes through the village center Selje. We shop for local food based on goat at the Coop, stroll along the Caribbean white sandy beach, and content ourselves with admiring Sancta Sunniva in the park. Closer acquaintance can be made at Selja monastery is a short boat trip out to sea.

When NHH professor Victor Norman in the autumn of 2020 thought aloud about the fifties for Outlying Norway, the city man Norman suggested that the outskirts of the future may become a retirement home with the world's most beautiful surroundings. We approach Førde city, the starting point of the round trip. Førde was to become a model farm for Norwegian district development with both a shipyard and an airport in the middle of the village. The flow of people to the cities should be slowed down with attractive centers, the politicians thought in the old days 50 years ago, speaking of today's debate about depopulation of the villages.

But before we get started with traffic jams and traffic lights in modern Outskirts-Norway, we have to sweep past the distinctive sculpture park in Naustdal. There is plenty of parking close by. We cross the bridge into the green. Contemporary art in extra large size is signed by Norwegian star names such as Kjartan Slettemark and Oddvar Torsheim. Their works arouse reflection, connect the threads between the past and consumer society, nurture the imagination and make the surroundings even more beautiful for both residents and passers-by.