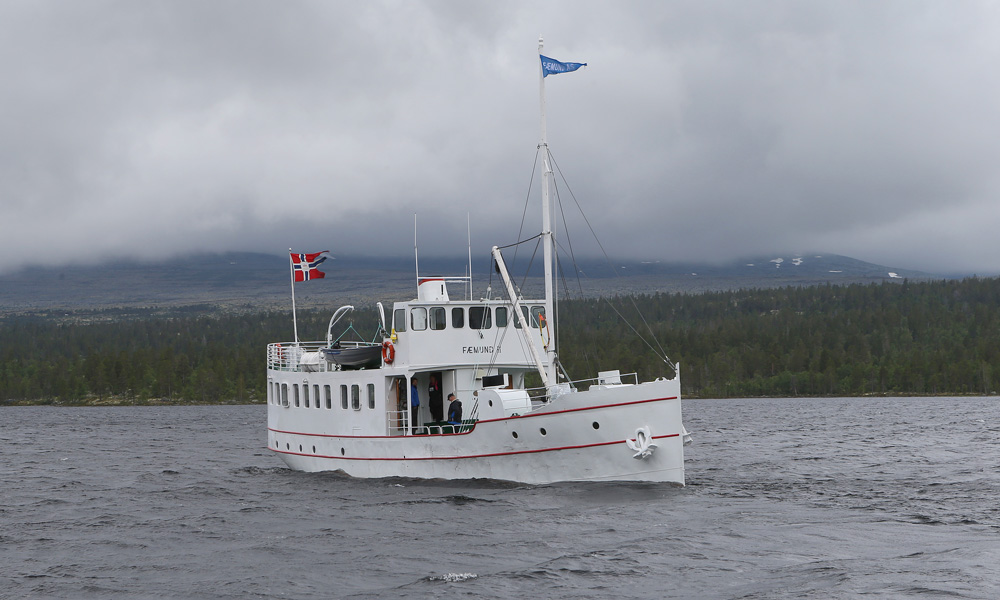 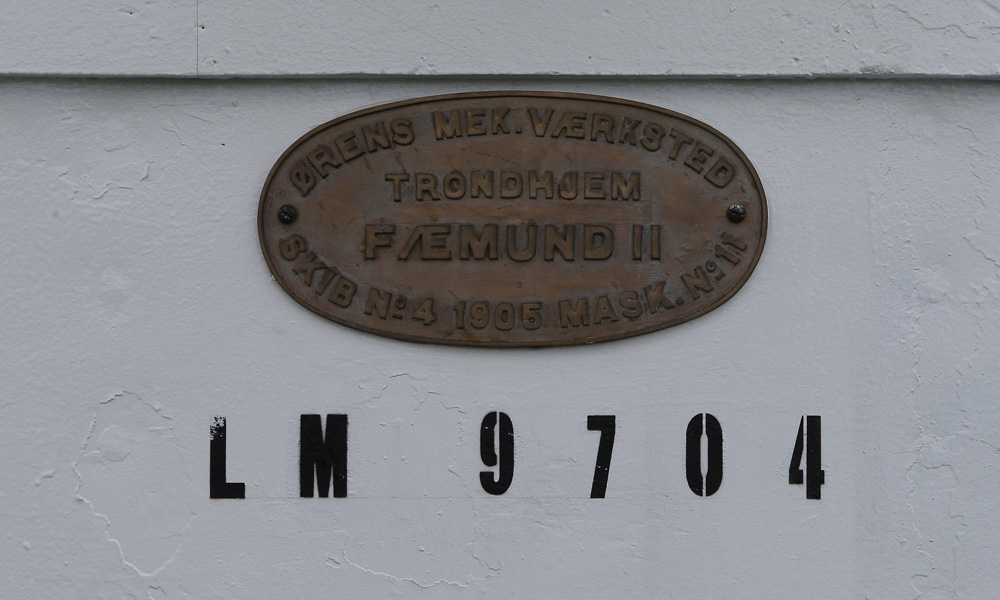 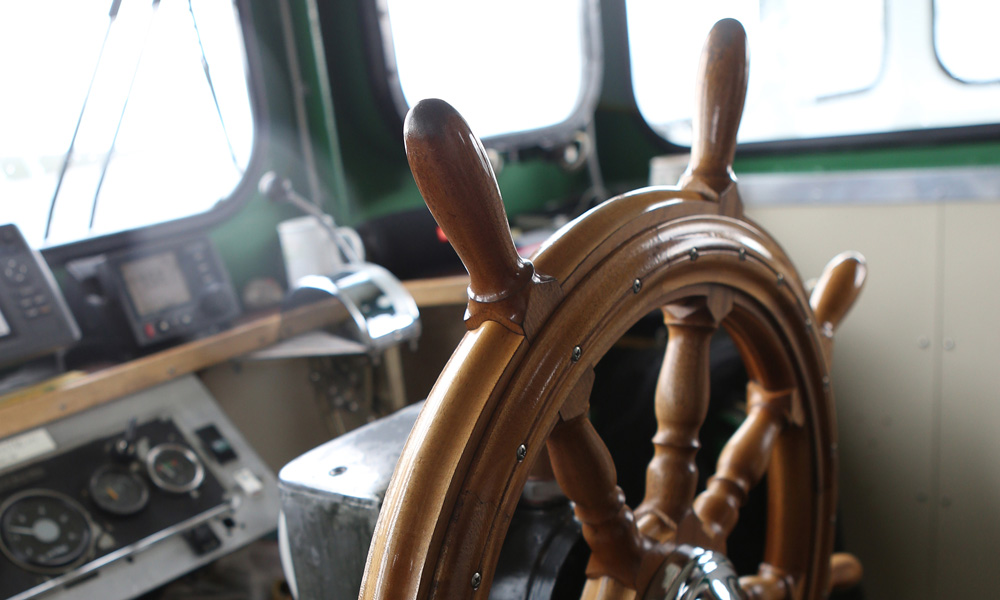 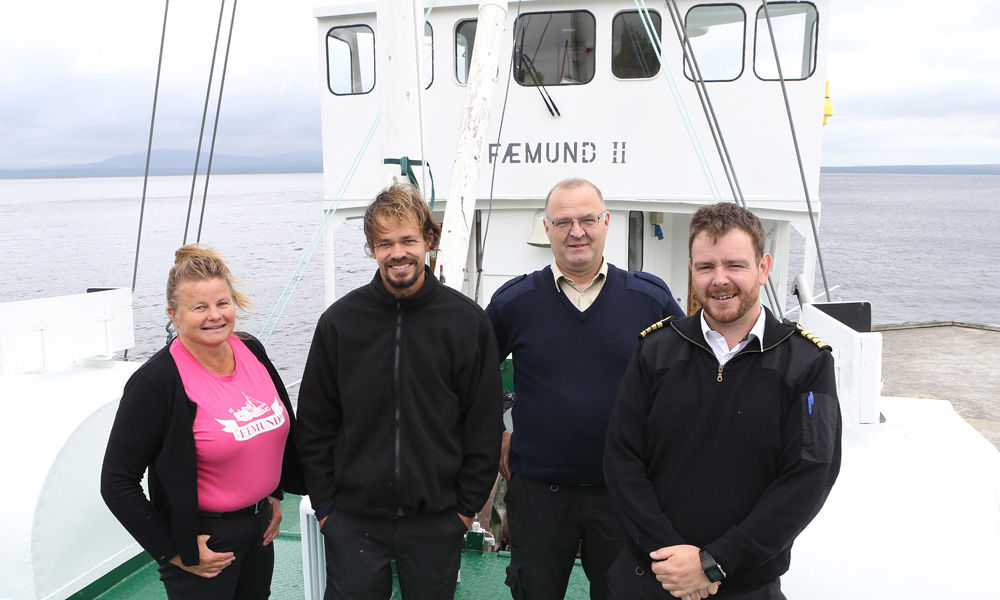 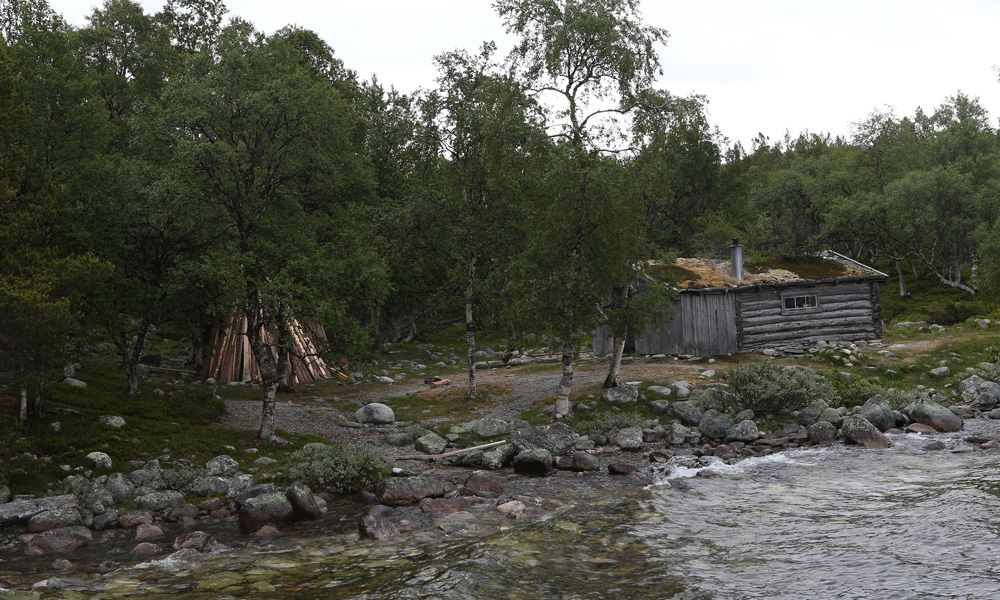 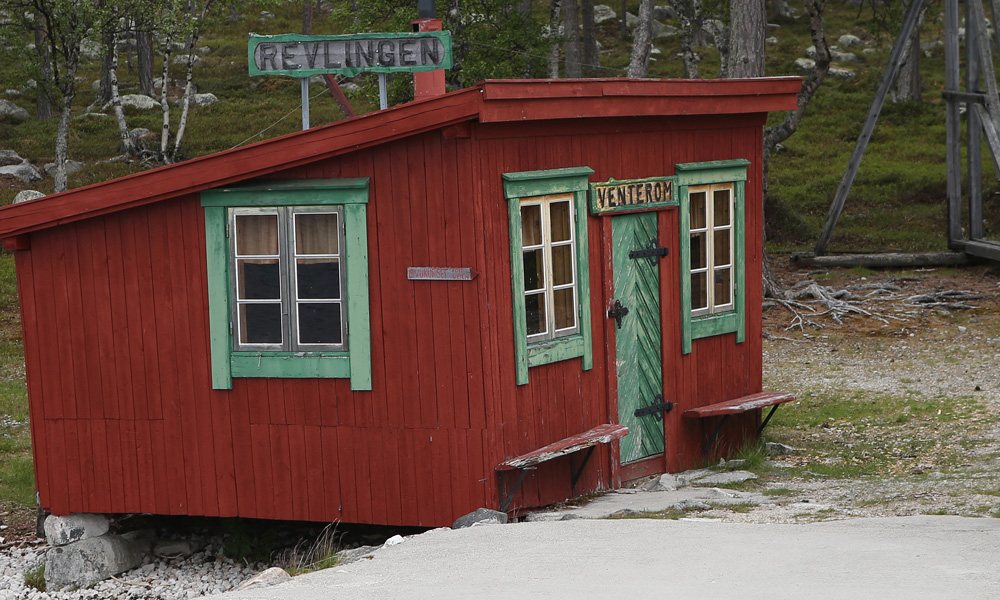 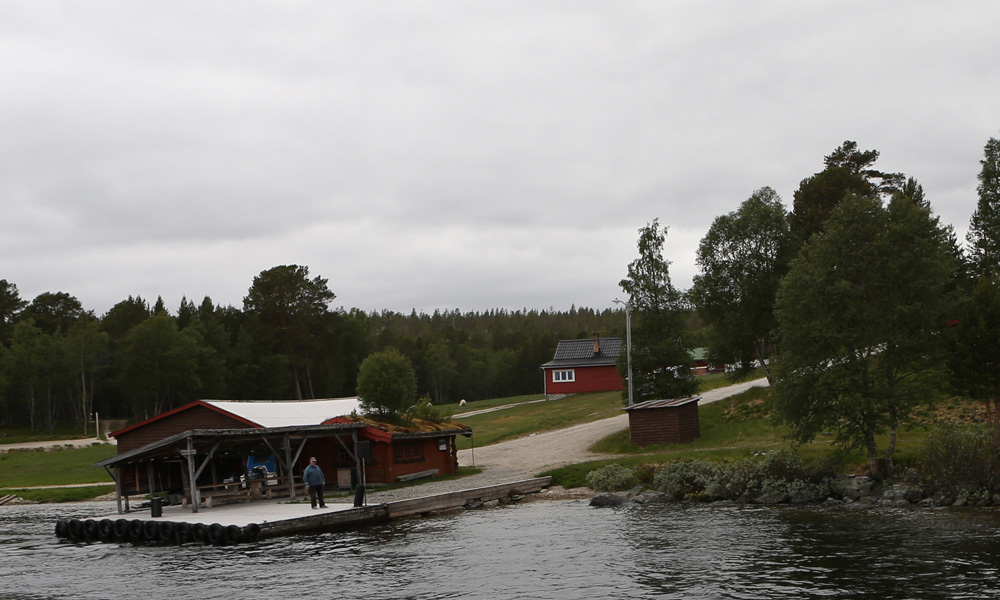 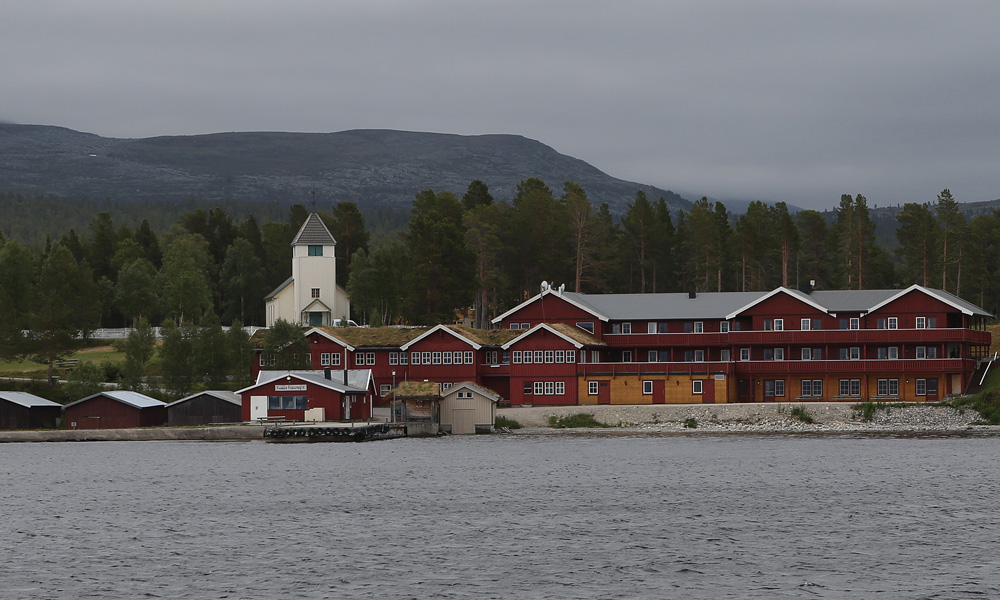 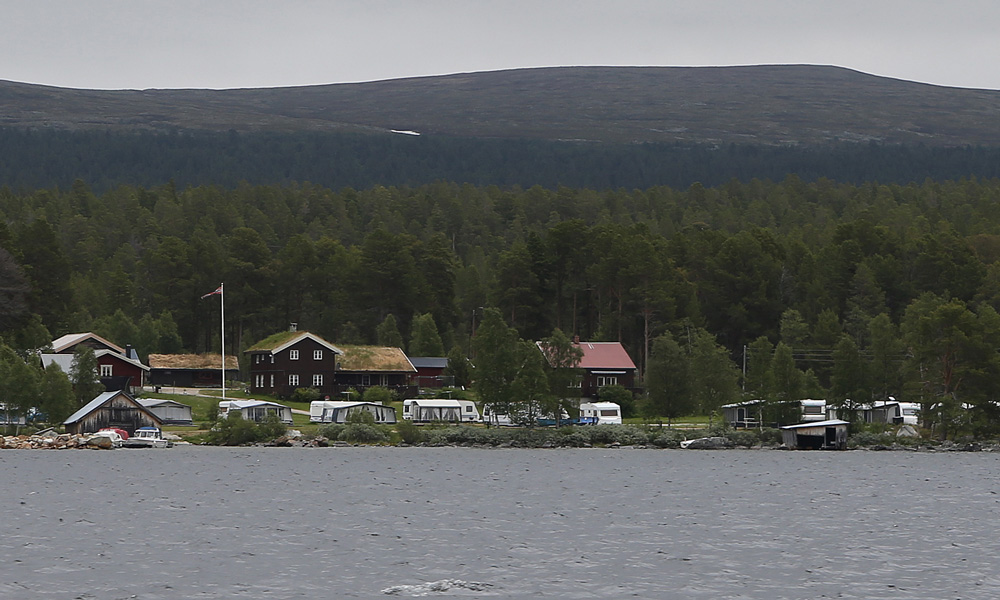 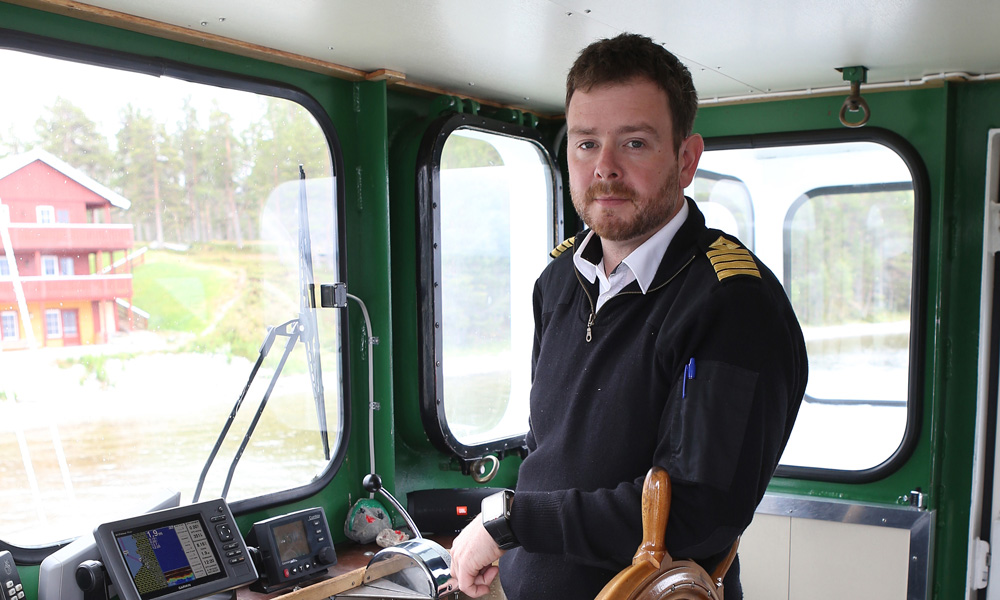 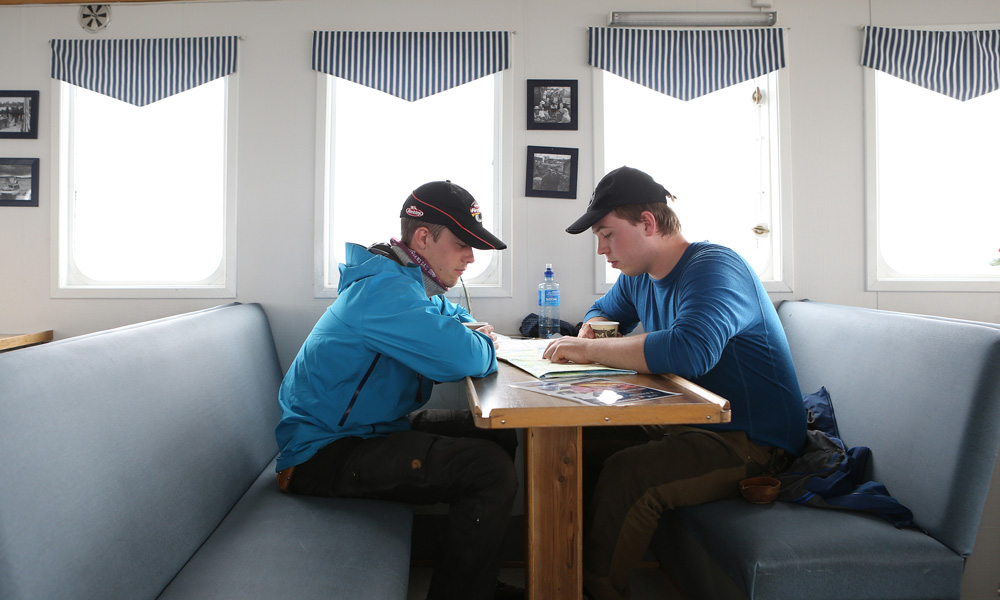 By: Harald Vingelsgård
Motorhome and Caravan magazine, No. 5 October

Natureldorado: A historical trip by ship

Travel reports from Norway
A trip with the ship M / S Fæmund II provides an experience you will never forget. On the large lake Femunden surrounded by a nature eldorado. -"Hi! Welcome on board! ”- The sailors Atle Husøy and Harald Aamodt Aadland receive us on deck, where we board from the quay at Synnervika on the north side of Femunden. The time is soon 9.00 in the morning. Time for today's trip with Fæmund II. A summer day in June. A nice day.

Skipper Per Erik Husøy has taken a seat in the wheelhouse. He leaves from the quay, heading south to the sea. We stop by the kiosk on board and buy a waffle plate with homemade rhubarb jam and real sour cream, and a cup of coffee. Acting galley manager Jorunn Margrethe Sæther serves and accepts payment by card, it is also a bit modern in the old ship. We get out to sea quickly. The boat sways a little while we take a few gentle steps into the lounge and sit at one of the long tables next to the window. We look out over the sea. A sea surrounded by forest, and above the forest we see a large and mighty mountain on the right side. Many nice cabins are located down by the sea at Synnervika.

Inside the salon we find the book Femundsbåtene which brings us back in time, to the time when the ship Fæmund II was made at the beginning of the 1900th century. In the past, the sea was the main shipping route for people living around Femunden. A time without cars, and without proper roads in most places. People on the farms depended on the boat, both to get there themselves and to bring goods. Well, it's mostly tourism on Fæmund II. People who want to enjoy a cruise. People who combine boat trip with hiking. Many people go to Femundsmarka to fish in rivers and lakes, where there is a lot of trout and char.

We read a little in the book: «The Femundsbåten has for well over a hundred years been an essential part of life at Femunden. It has transported people to and from, been available for pleasure trips, taken part in the timber rafting in the spring, transported horses to summer grazing, acted as an animal transport when cows and horses were bought and sold, and it has made sure that the residents around Femunden have got it they needed necessities of life. », it says a lot in the book Femundsbåtene. The skipper keeps a steady course. On a table next to us sits an elderly couple who are also part of a full-day mug. She knits, he looks out to sea.

People live in many places around Femunden, as they have done for hundreds of years. The settlement of the areas around Femunden is closely connected with Røros Kobberverk, which started mining in the middle of the 1600th century. Oops. Over the loudspeakers we hear that the ship will soon call at Røa, first stop. We go out on deck and see that many are standing on the quayside waiting for Fæmund II. Some hikers get on board. Four grown men from the Norwegian Tourist Association in Horten have been to Femundsmarka and marked a mile of hiking trails in two days. Red marks. Wizards.

Around Femunden there are good opportunities to walk on marked paths, all the way to Sweden if you want. Light terrain. You can bring a tent and spend the night wherever you want. You can rent the tourist association's cabins. You can use Statskog's cabins for free, without asking anyone. You can of course also rent in the tourist places. The skipper steers out to sea again. People sit at the tables in the lounge and relax. Here it is serving much more than waffles and coffee. A special plate, Rørosbrett, consists of cured meats and cheese made in the Røros region. We turn back time.

In 1886, the steamship company Fæmund was founded. The following year, they bought a wooden ship. But Fæmund II is a steel ship from 1905. The ship was made in Trondheim and transported in parts by the railway to Røros, a few miles from Synnervika. The parts were then brought on by horse to Synnervika. At Synnervika they riveted the ship together! The boat Fæmund II has operated Femunden every single season since 1905. In other words, we are on a boat with a historic buzz, even though it has been rebuilt many times since it was new.

Fæmund II was a steamship that was fired with firewood. In 1945, the steam engine was replaced by a diesel engine. Now the ship has GPS and autopilot. This ship is so historically interesting, that the National Heritage Board protected it a few years ago. We call the chairman of the board Jan Åge Røtnes in AS Fæmund, while we are out on the waves blue. We have time for a short conversation before the next call. - "We take responsibility for maintaining the ship, and we do not change anything, without permission from the National Heritage Board" -, says Røtnes in the company AS Fæmund. The ship is so interesting that the day after we spoke to him, he was to take a large number of foreign journalists on a trip with Fæmund II. We thank you for talking to the chairman.

The wind is taking hold of Fæmund II now, it is swaying a bit. We have passed Femundshytta and Haugen and call at Jonasvollen. There is the quay directly below Jonasvollen Camping with cabins and space for both motorhomes, caravans and people who want to camp. They also have a marina. Two well-adult women go on board with heavy backpacks. Another woman is riding an electric bicycle that she parks on the deck. A quarter of an hour later we arrive at a place called Revlingen and there they have a very nice waiting room, a small house painted green and red with two small benches in front.

Elgå next. It is today's terminus. There is a lot to see by the quay. On the pier is Femund National Park Hotel with the restaurant Bryggeloftet and a sik reception. - «We are probably Norway's only hotel with its own fish reception. "Femunden sik'n chips" is one of our most popular dishes. We serve smoked fish and dug fish. Newly fished whitefish during the fishing season »-, says Mali Romestrand who owns the hotel together with Bjørn Olsen.

In Femunden there is a lot of fish, mostly whitefish, a lot of char, in addition to trout, grayling, pike, lake and perch. A few hundred meters from the quay is Båtstø Camping. - «Båtstø Camping, the pearl at the entrance to Femundsmarka. Come and enjoy the silence and beautiful nature where the road ends on the east side of Femunden »-, says Tove Elgåen who owns the campsite. There, people can live in one of the cabins that have been old houses on the farm, or camp with a caravan, motorhome or tent by the shores of Femunden. - «Nordre Båtstø is one of the oldest farms located in Elgå-vika. There was permanent settlement here around 1750. The nature here has always been rich in fish and game, important for the population over the years. Hunting for small game, birds and moose. Fishing in Femund and nearby lakes, lakes, rivers and streams. The traditional farm was closed down in the 1970s. We wanted to share some of our magnificent nature with others who wanted to come here to experience silence and recreation. Therefore, the old houses on the farm were converted into cabins "-, says Tove Elgåen at the campsite.

We go up to the skipper and talk to him a bit, while he has a break in Elgå. - "All ladies have their soul" -, says Per Erik Husøy, with a twinkle in his eye, when he talks about the ship M / S Fæmund II. He also talks about the physics of the ship. The ship has little engine power, but listens well and is easy to maneuver. He has been a skipper for a couple of years and enjoys his job at Fæmund II, although Fæmund II is not much bigger than a lifeboat for the large crane boats he has been skipper and helmsman for in national and international waters. "Fæmund II has 160 horsepower and is powered by a Detroit diesel engine," he says.

Fæmund II has a large windbreak in the superstructure where the skipper stands, but the boat had not stood still due to bad weather, more than a day during two years when we spoke to him. We thank you for the chat and go down to the salon. Time for departure, return in the direction of Synnervika. Some have got off the boat, new passengers have come on board. The next port of call is Revlingen, so Jonasvollen, then will come to Haugen, the same places on the return. At Kaia on Haugen stands the man who runs the farm there, Haugen Gård. There is no way there. People who are going to visit the tourist place can take the boat or go there. - "We are the only permanent settlement without a road in a protected area in Norway" -, says Svein Bjarne Waldal who owns and runs the tourist resort Haugen Gård. - "- We are not allowed to build roads because we are located in the landscape conservation area Femundslia" -, says Waldal. The sailors have time to talk a little with Waldal, before we leave the quay again.

Laid copper on the farm

Femundshytten is a tourist resort, former farm, where the boat Fæmund II also has a permanent stop. A place with very long traditions, several hundred years back in time. - «Femund Hytte, as the place was called in the past, was a small smelting hut under Røros copperworks from 1739 to 1822. At that time, copper was made from copper ore in the smelting hut. After that time, farming, combined with fishing and hunting, became the most important industry for the troublemakers around Femund »- says Tommy Berndtsson who runs this tourist place together with his cohabitant Lill Morønning. Femundshytten applied for a road for 40 years, before construction began. When the road was completed in 1998, Femundshytten became connected to the outside world in a new way. There was an end to having to use Femund as a means of transportation all year round, boats in the summer, snowmobiles in the winter.

Now Fæmund II is important for tourism, says Tommy Berndtsson. Femund II has been operating on Femunden for much more than a hundred years. - "We hope it will continue to run for the next hundred years" -, says Tommy Berndtsson. The skipper leaves the quay again. We cross the sea to the penultimate stop, Røa. Two guys from Trondheim go on board. They have been hiking in Femundsmarka and are going home to the big city. At 15.30 precisely we dock in Synnervika. Today's mug is over. Thanks to Fæmund II and the crew on board. We have had an experience we will never forget.