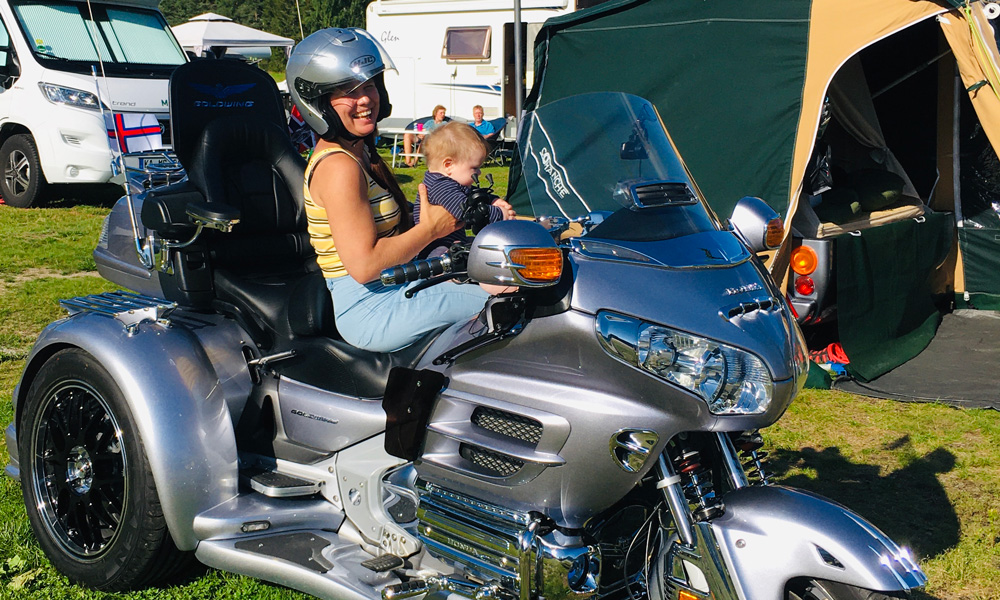 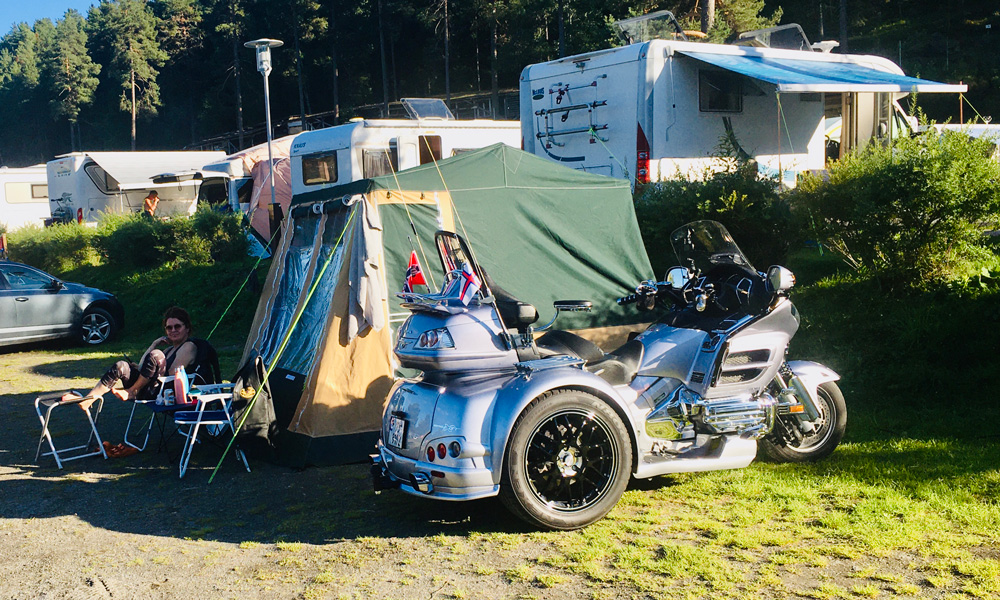 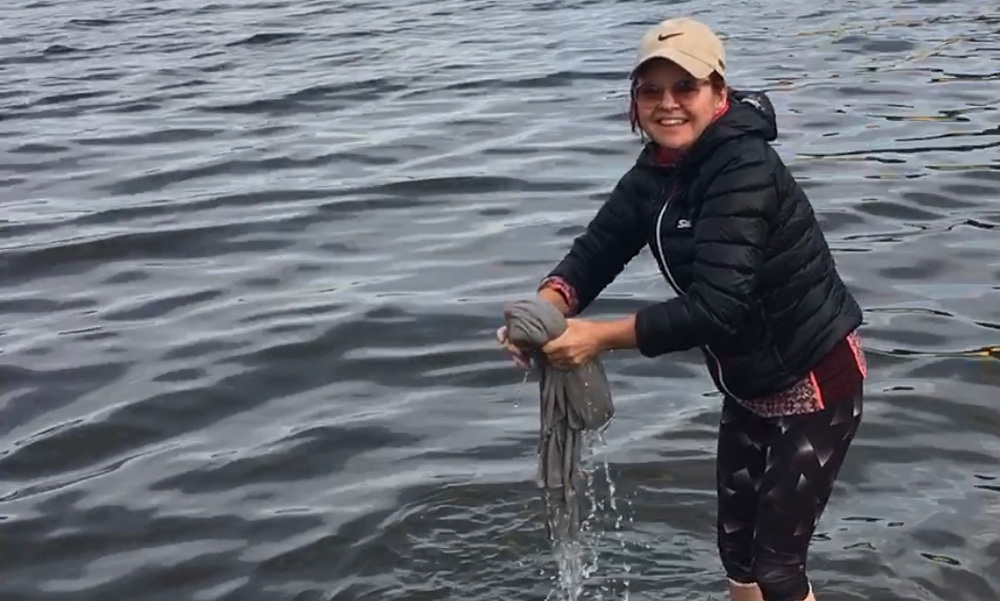 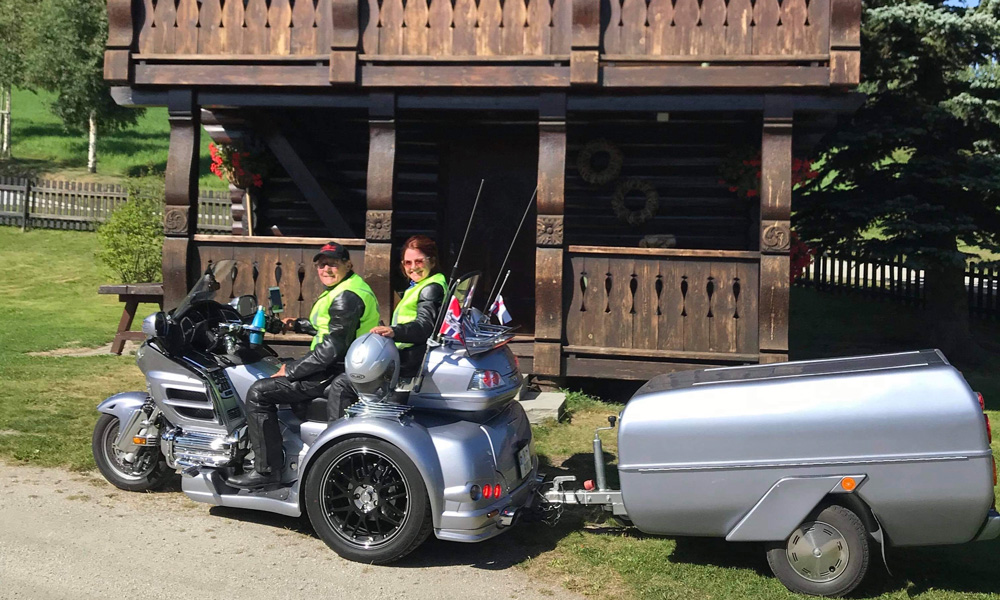 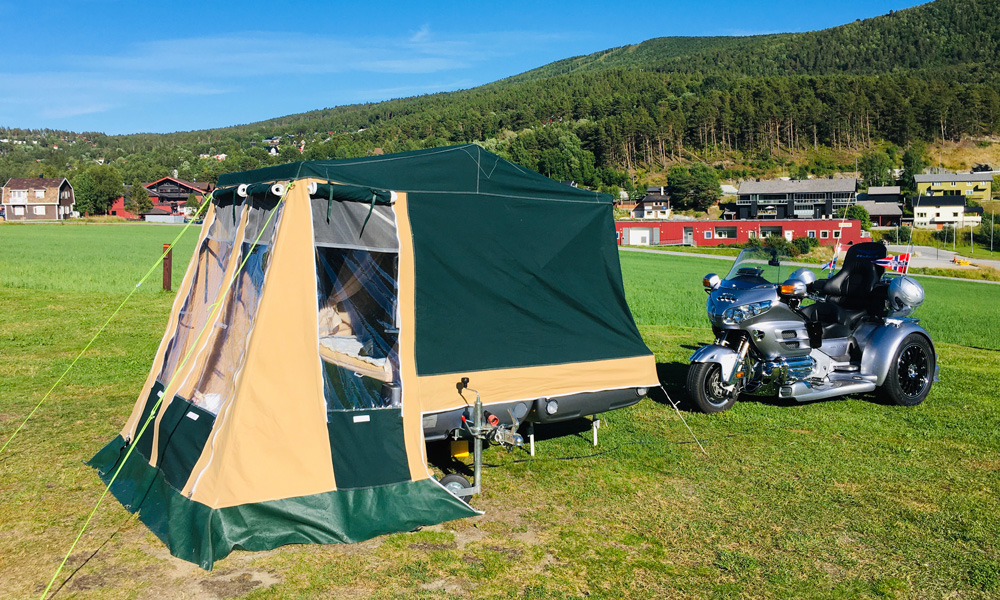 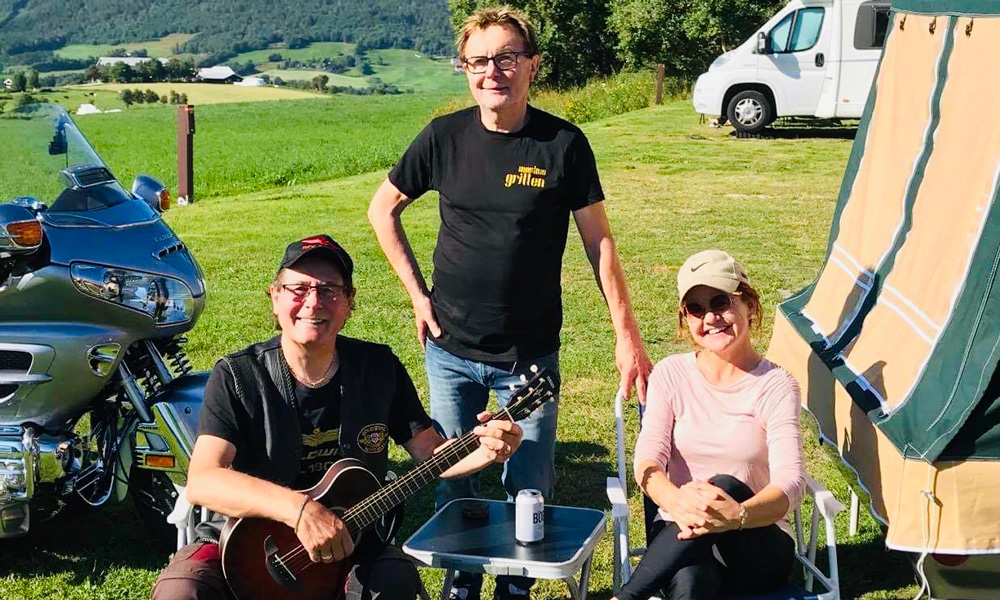 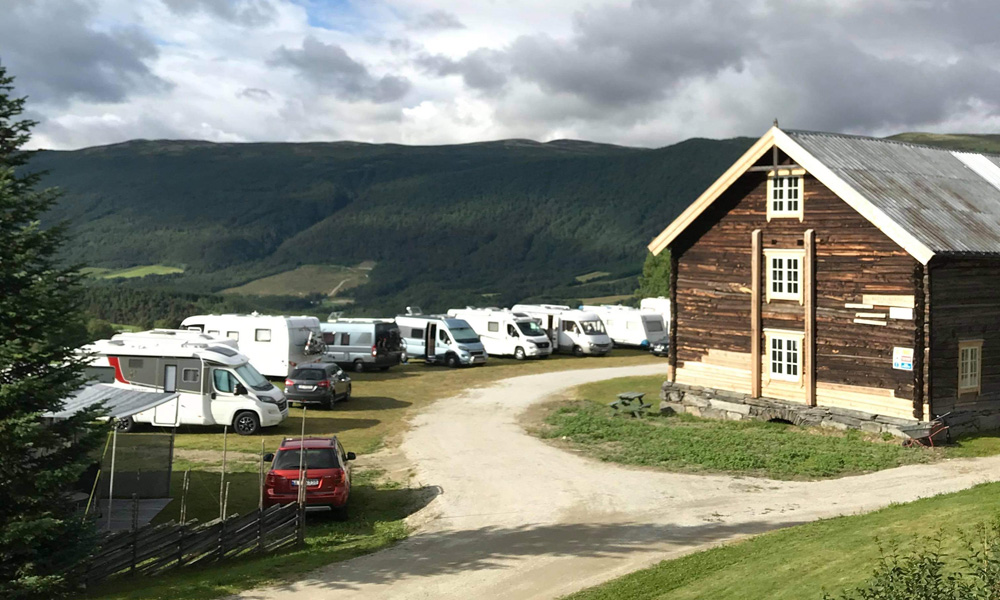 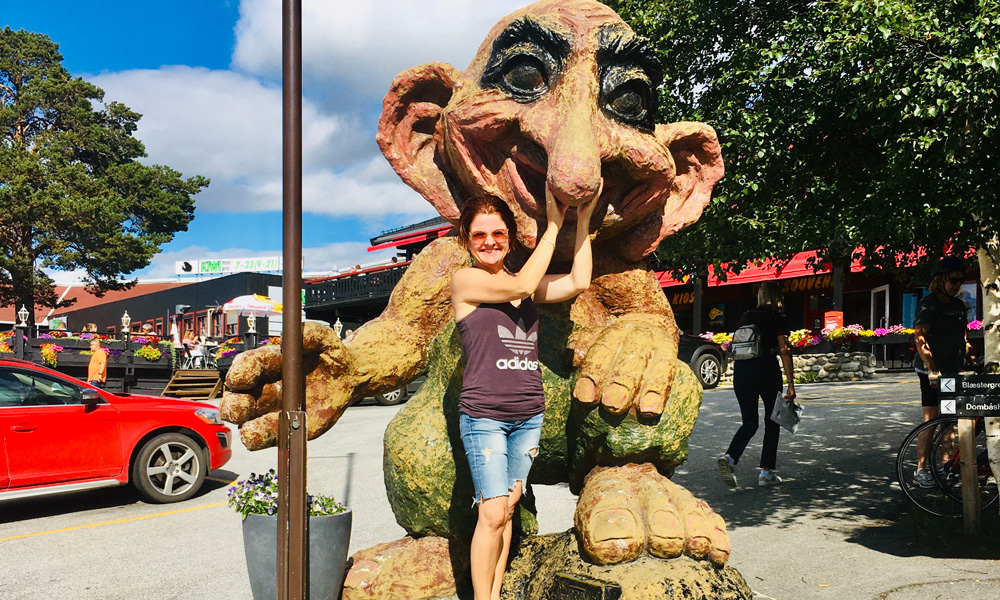 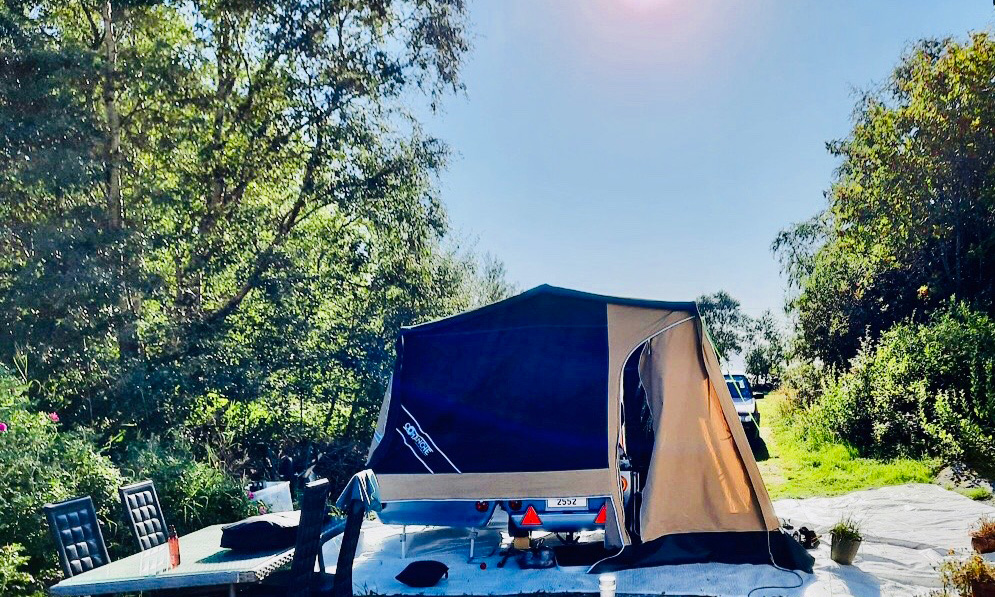 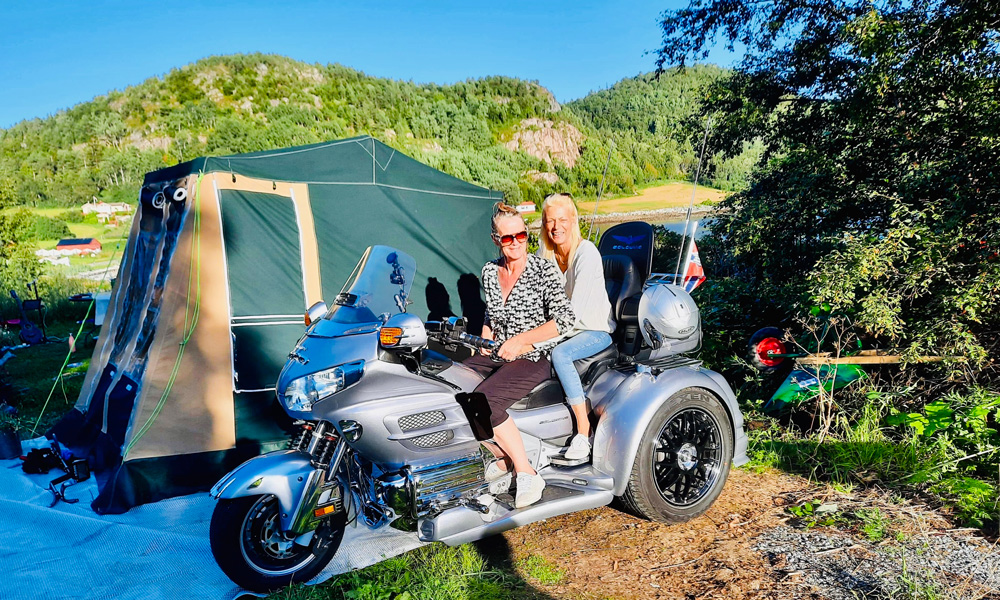 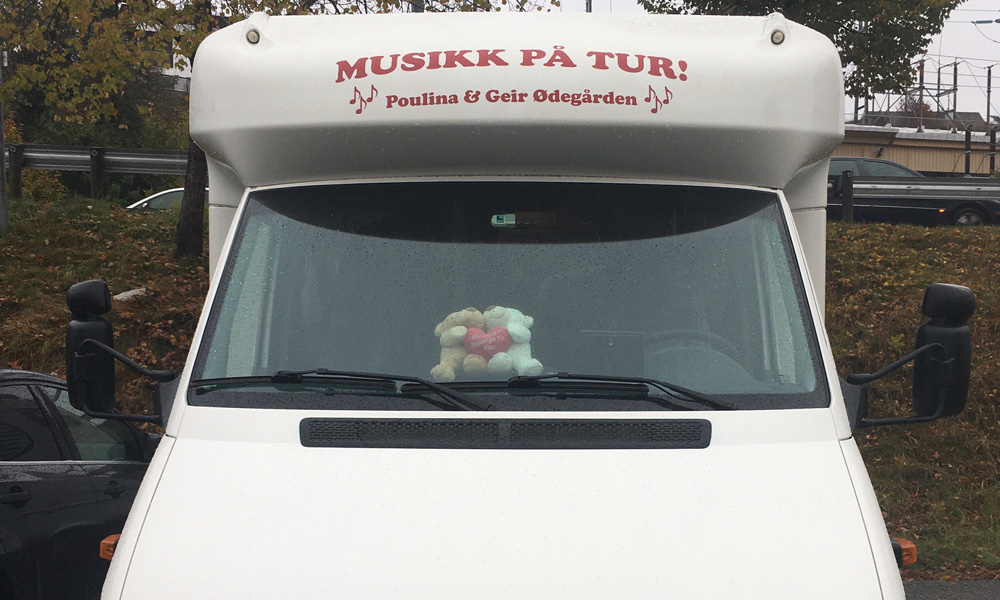 Holiday 2020: With motorcycle and Camp-let!

Travel reports from Norway
This year we decided to try out a new form of camping holiday. We sold the motorhome and later bought a slightly smaller motorhome in the autumn. Now we had bought a Honda Goldwing 1800 which was the "trick" as it is called. That is, it has three wheels and is good to tow a trailer with.

But it was not a trailer we needed. We had to have something in tow that we could stay and sleep in, so the choice was a Comanche Camp let. It had good luggage space and we could live and sleep in it almost the same as in a "tiny" camper. We decided to visit a friend up in Trøndelag, but also drive past several destinations on the trip that we had previously visited by motorhome. The first stop was to be at Notodden. Specifically Nesøya Motorhome Parking. Not many miles to drive, but still enough when the departure was somewhat late in the day.

We started up the "motorcycle", took the shortcut over Valebøheia with the Camp-let'n which was loaded with chairs, tables, guitar, amplifier and much more. We had never driven that road before with a motorhome when the railway underpass on the road was far too low for a tall motorhome. But now it was just a matter of accelerating with the cabin in tow. Suddenly we were in Notodden, found a free place among all the motorhomes and were very happy that we had a motorcycle and Camp-let. If we had driven a motorhome, we would not have got a place as there was a lot of space in the place. We rigged ourselves up and set out tables and chairs, connected power to Camp-let'n and everything was now just fun and games. Now it was great to be on tour again!

My wife and I quickly noticed that some of the campers were looking at us a little extra this time. They think we had a little "weird" and maybe a little special way to holiday, but which we think was just nice and fun! Now it should turn out that it might not be so strange that some of the motorhome people looked a little strange. We had thought about it, but it was actually not allowed to be there by motorcycle and Camp-let, this place was ONLY for motorhomes! The manager of the place came a little later and told us that we could not really be here, but added that since we had already rigged up and that I was even born in Notodden, we would not have to unpack again and we were allowed to to be there anyway. We were relieved, thanked and bowed to it, and said that next time we will come with a motorhome.

The next day we pack up again and drive up along Tinnsjøen and further up to Tinn Austbygd and Sandviken Camping. A great place we have been to many times before. Children and grandchildren also live there, and then it's extra nice to get there. On Sandviken Camping there is a separate place for tents and motorcycles, so here we knew we could mingle with the other camping guests. We stayed at Sandviken for a few days and was visited by children and grandchildren and enjoyed ourselves! After three days in Austbygda, we pack up, connect the Camp-let on the motorcycle and drive to Fagernes. The trip goes up Tessungdalen over Imingfjell and down to Geilo. Further over Valdresflya and well it went away. The Goldwing with a cabin in tow was no slowdown in traffic, suddenly we were at Fagernes Camping. A great place that we have been to several times before and that we just had to stop by. Here we found an idyllic place down by the water and stayed a whole week. Also got many of the camping guests to visit, known and unknown who just had to see our driving donation and at the same time see how we felt inside the Camp-let'n or Hytta as we call it.

On our holiday trip this time, several residents and holidaymakers came and asked if it was OK to take pictures of our vessel, which of course we said yes to, because this was just fun. Pictures were taken from all angles and edges. As a former musician in an orchestra, I have been used to being photographed and filmed, but this took its toll. We have never experienced the like of lots of photography, but of course it was just nice! Many were surprised when they saw what we had been accommodated by both tables, chairs, porta-potti, guitar and amplifier and more inside our small cabin. Then it was time to say goodbye to Fagernes Camping and many nice acquaintances. The week went by way too fast but we were going to move on Trøndelag, more specifically to Hasselvika on the Fosen Peninsula.

On the way to Trøndelag we stop to spend the night at Domaas Gård, Hyttetun and Caravancamp. There we are received by the manager himself, Roar Domaas, a nice and hospitable owner of the place. After being shown around the campsite, he says that we can park where we think it suits. This was absolutely unique and we place ourselves at the very end of the square and get a fantastic panoramic view over the valley. A little later in the evening, guests come from the campsite with the wish that we sing and play a little for them. Oh yes, why do not we think and bring out guitars and microphones and then there was dancing and music until late at night. Very nice to play for the hikers, there will always be life and fun! We enjoyed ourselves so much at Dombås that we stayed an extra night and have already decided that we will return there next summer with a motorhome or "cabin" in tow? We will see which vehicle we choose? Both means of transport work for us!

After two eventful days at Dombås, we set course for Trøndelag and Hasselvika. Here, Hilde, who is a friend of my wife and I, has arranged a nice campsite for us right outside her own house and living room window. I must add that we were offered accommodation inside, but due to my animal allergy, the accommodation had to be in our cabin on wheels. In Hasselvika we were so well taken care of that we stayed a whole week, before we headed down again to the south. We drove home again with a good feeling of an exciting and eventful trip! Heia Hasselvika! Must bring that the weather gods were with us on the whole trip, sun, sun and sun again, could not have been better! Next summer, we might meet more people riding a motorcycle with a cabin in tow? We look forward!