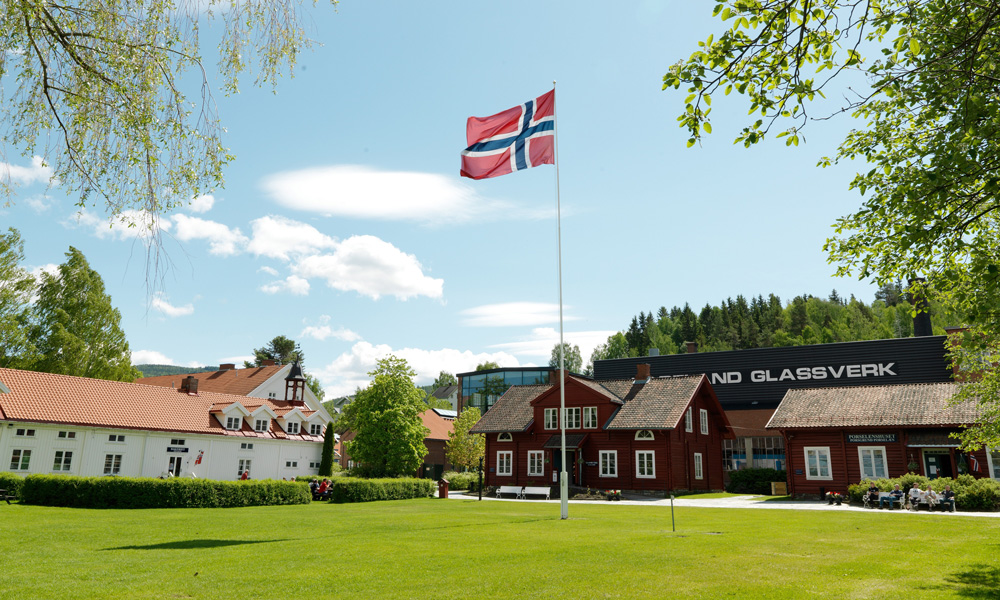 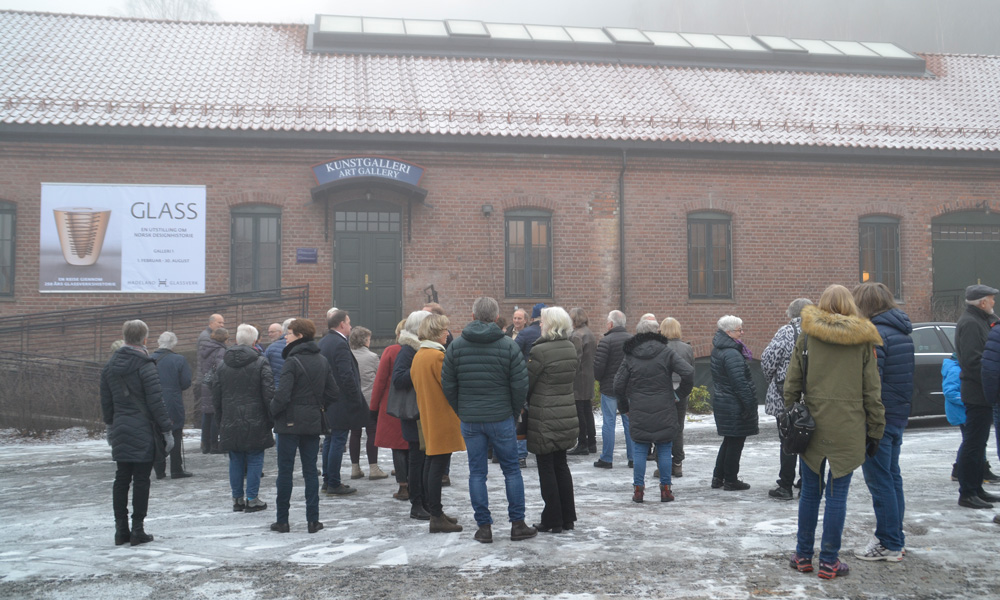 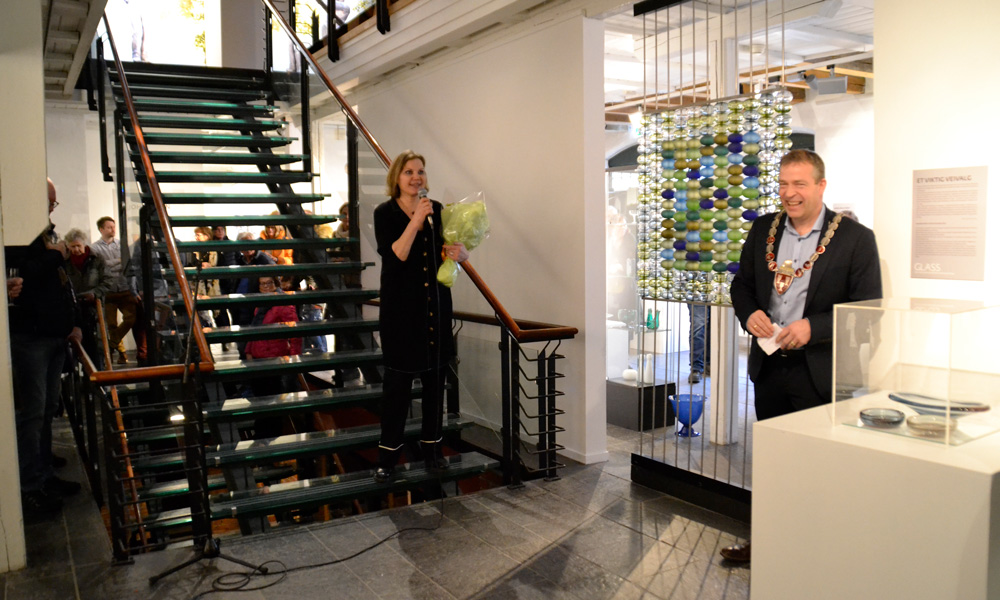 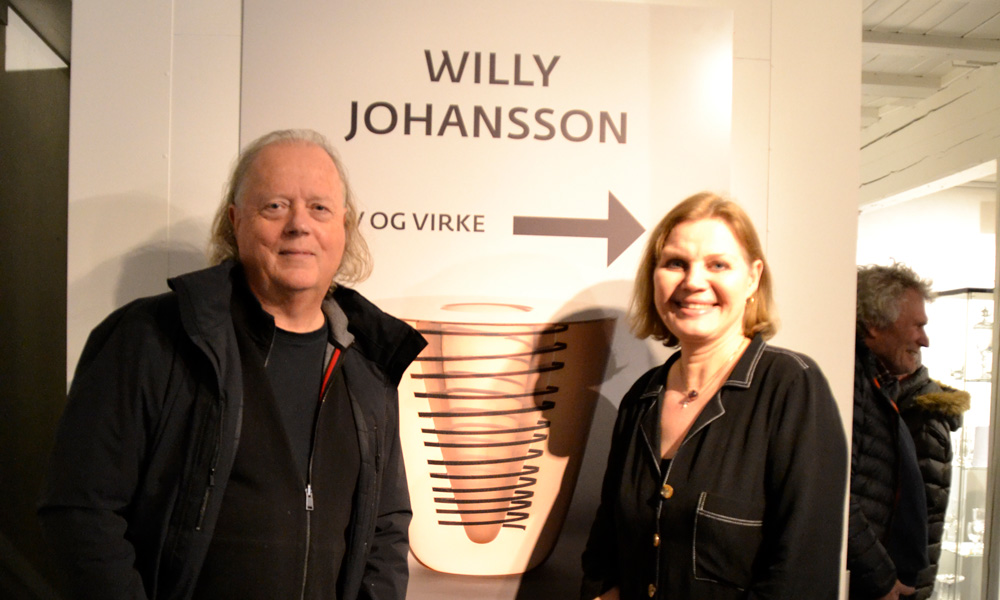 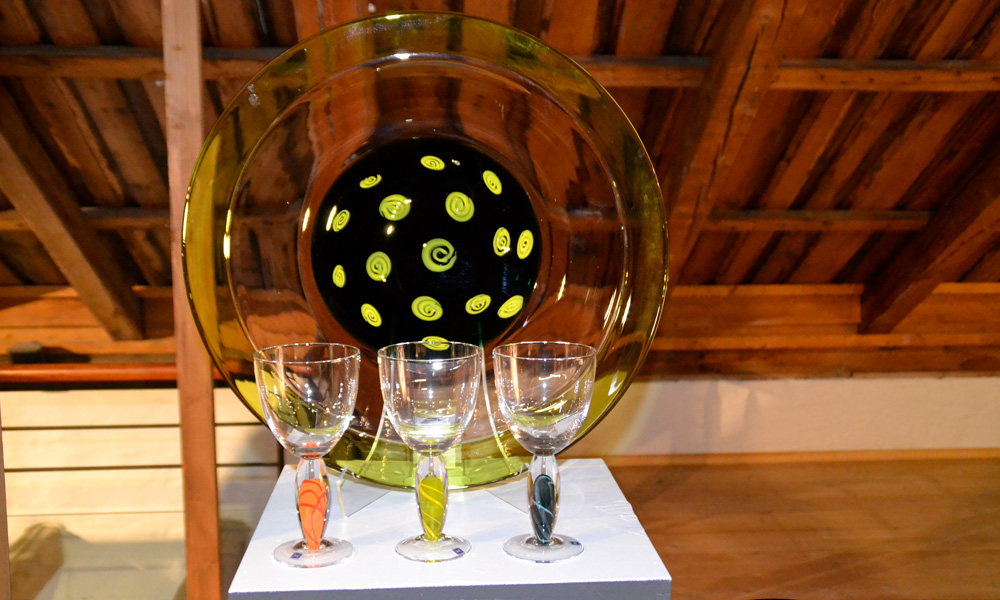 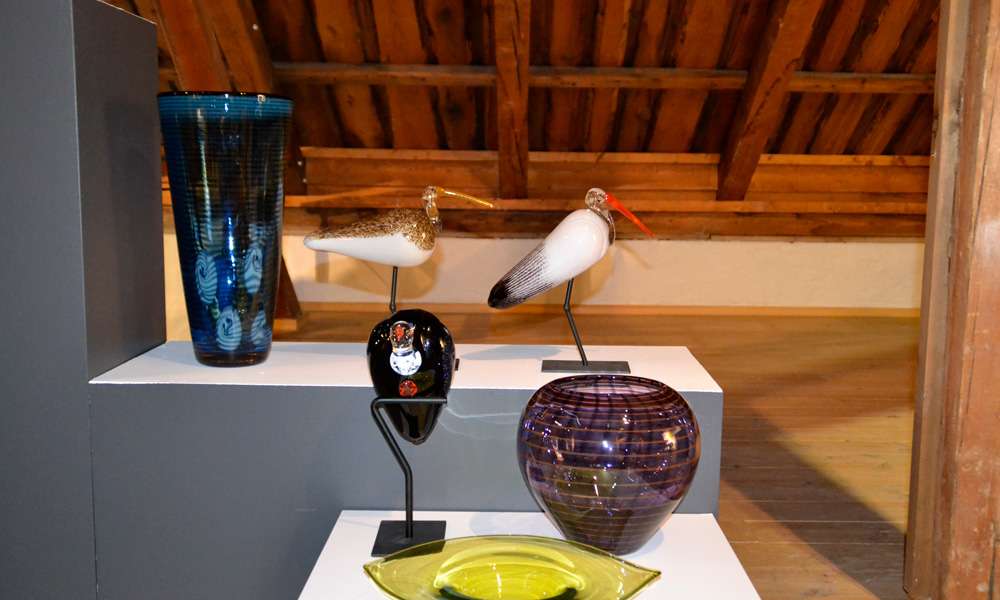 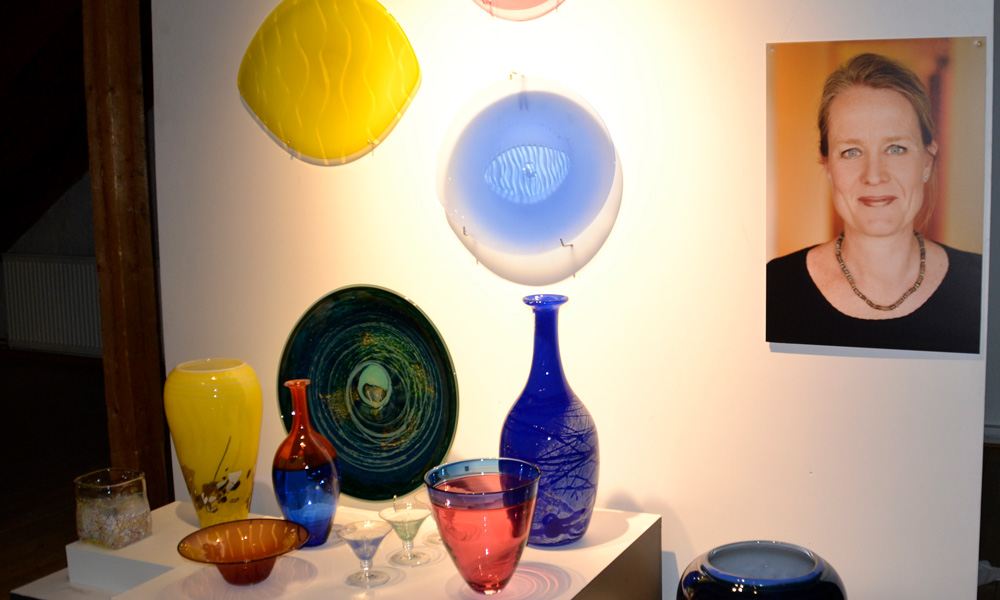 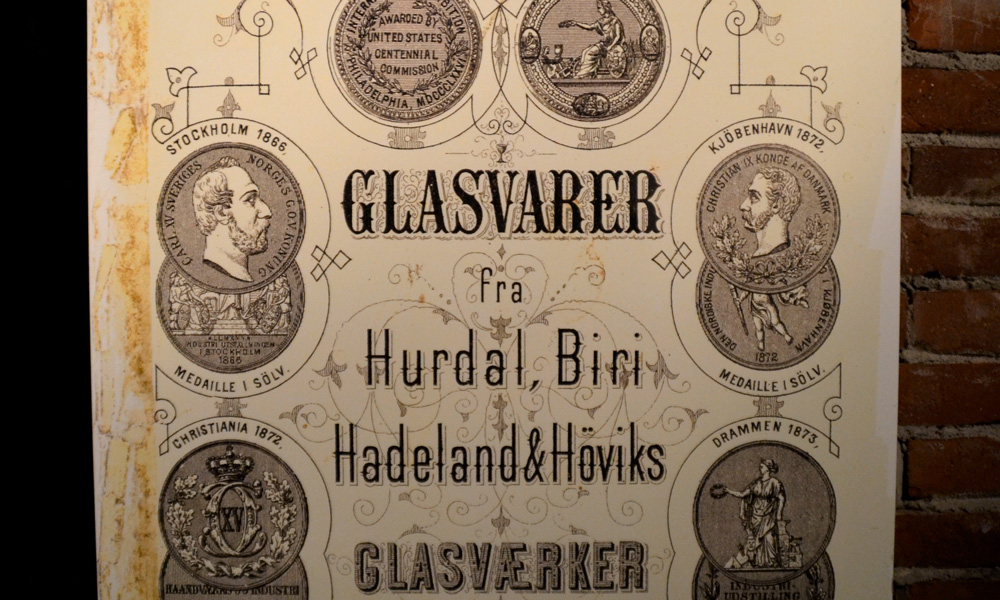 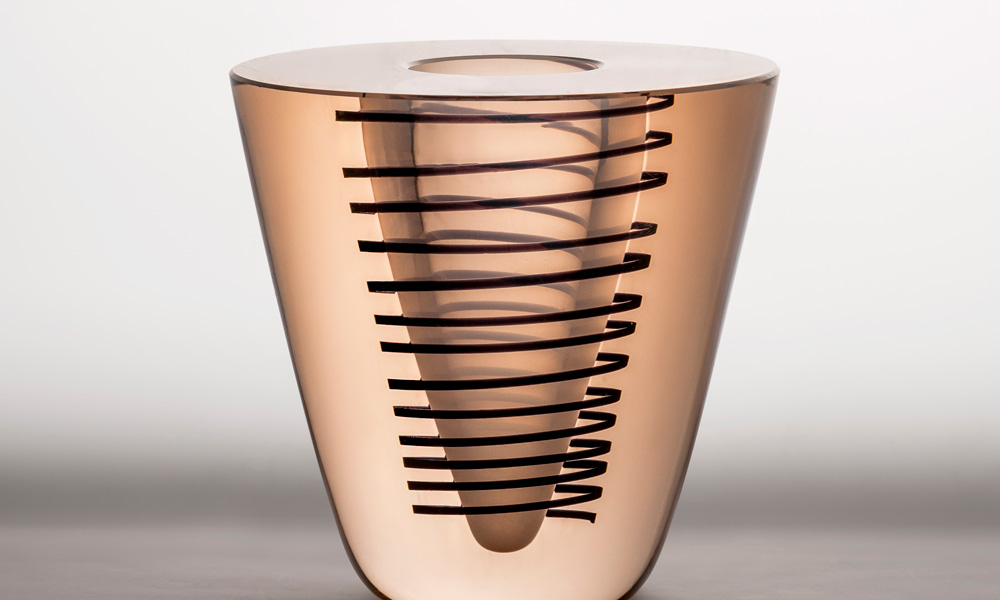 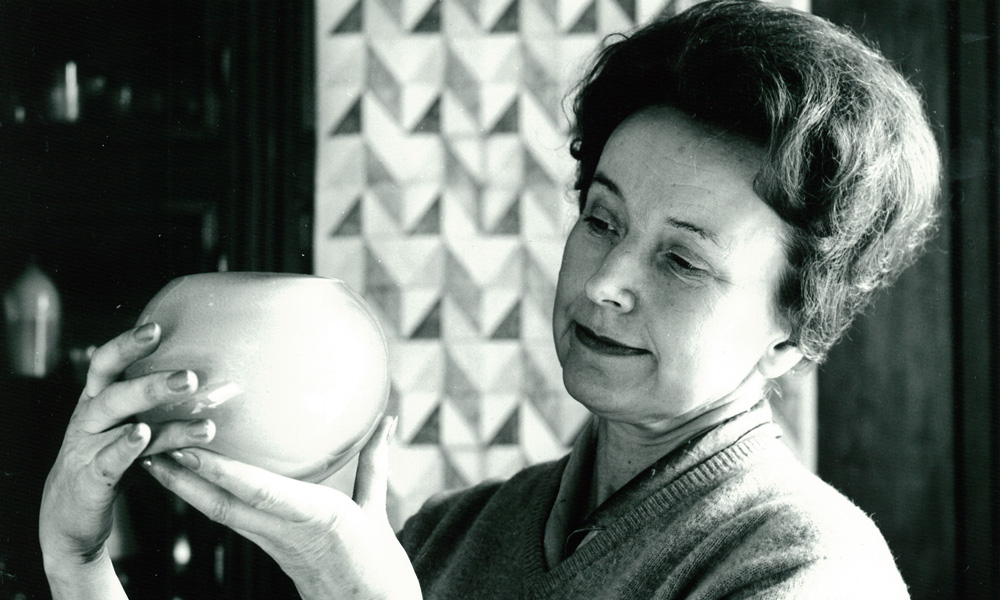 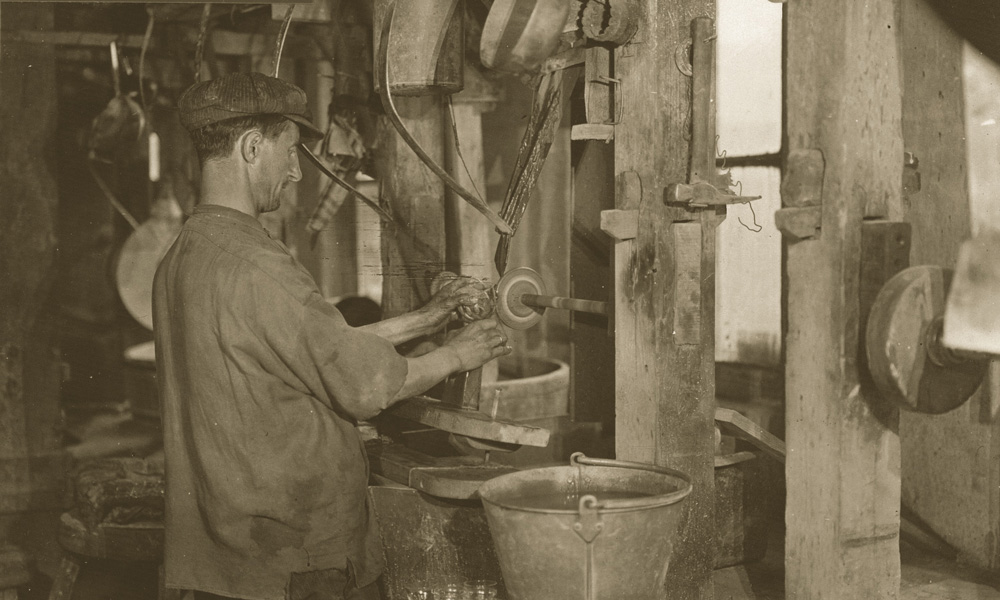 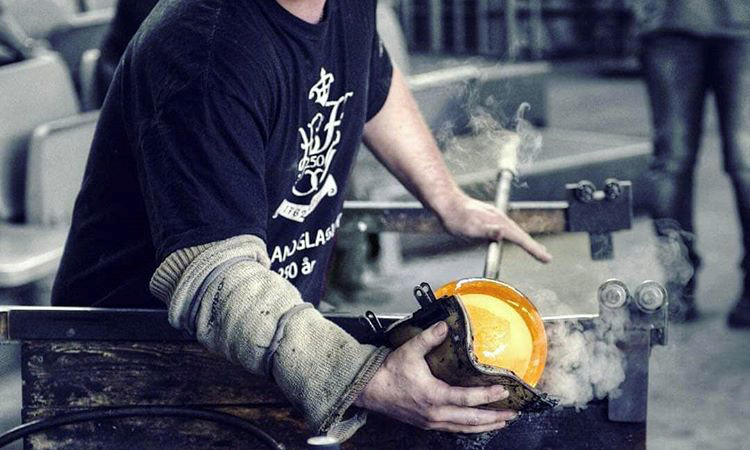 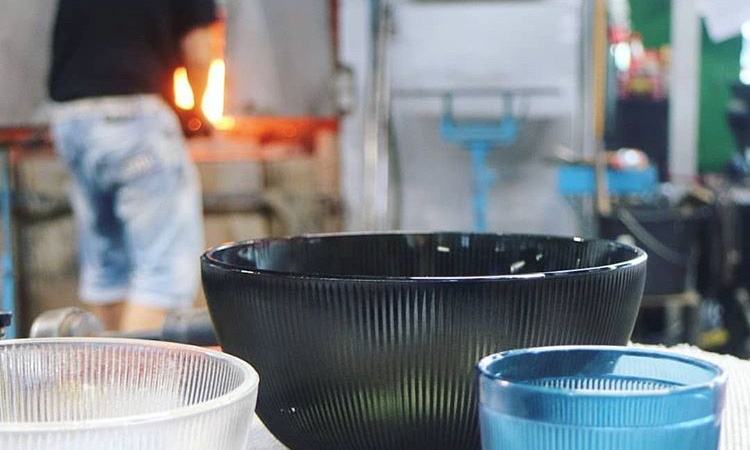 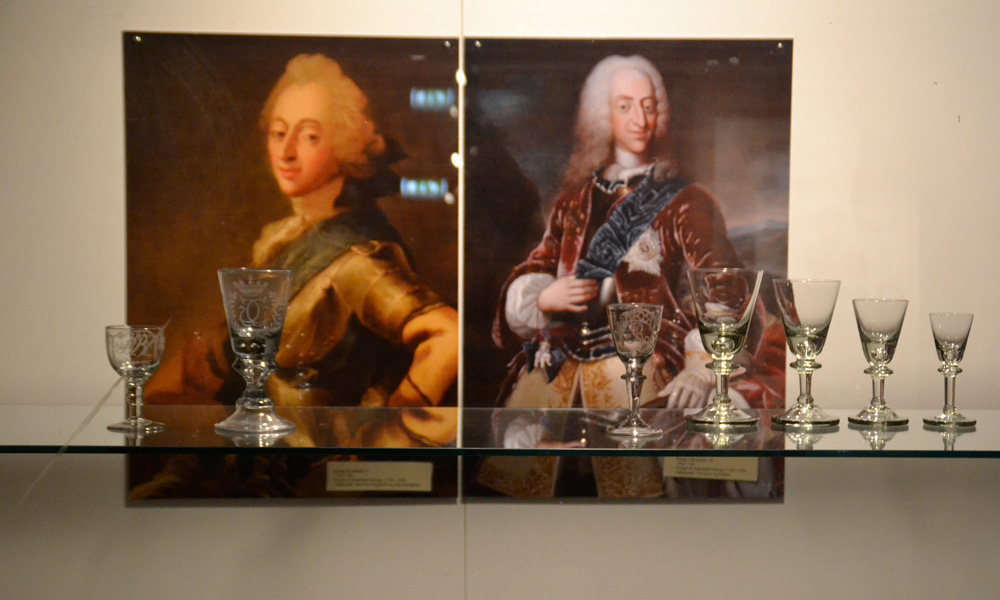 By: Kristin Smedsrud
Motorhome and Caravan magazine, No. 5 October

Travel reports from Norway
The year 1762 was the start of the Norwegian glass adventure on Hadeland. King Christian VI approved the founding of the glassworks. 258 years later, a fantastic exhibition at Hadeland Glassverk reverently opened on 1 February 2020 with Atle Brynestad present. The exhibition lasted until September. There were many visitors on holiday trips during this year's summer to scenic surroundings at the southern end of the Randsfjord.

Outside Gallery 1, a large assembly is eagerly awaiting the opening of the doors. The clock is ticking towards 12 and Elin Hammer, curator of the exhibition, welcomes the audience. With refreshments in the glass, we gather around the mayor of Jevnaker, Morten Lafton, who after his speech declares the exhibition open. The mayor himself has roots in history with family who have lived in the area and worked at the glassworks.

A journey in three parts

Glass is a large exhibition about Norwegian design history in three parts. The older story deals with the 1700th century with the beginning of the Norwegian glass adventure and through the lavish crystal production of the 1800th century. The design section deals with 1900th century modernism up to today's modern art glass design. It tells about the designers who have worked at Hadeland Glassverk - an interesting journey in design and change related to the society of the time. Here you will find Benny Motzfeldt, the first female designer to make the famous cheese bell "Benny" and Ragnvald Hansen, who designed "Marie" in 1912 and "Finn" in 1916. From 1936-46 when the renowned sculptor, glass artist and designer Ståle Kyllingstad was artistic manager. The last part takes a deep dive into the designer, Willy Johansson, with more than 40 years at Glassverket. Known for his design of "Siri" which is back, "Tangen", "Polar Bear" and "Atlantic".

- What is the background for the exhibition? Elin Hammer, curator and expert on Hadeland Glassverk's history, says that there has long been a desire to show the time from the glassworks' early beginnings from utility glass to handicrafts. The exhibition is designed to also showcase the artists - the people behind the products. Tell about them and rightfully the significance they have or have had in relation to Hadeland Glassverk. The last of the large Scandinavian glassworks, which still has production and is not just a museum. It is important to show how the artists use the material to create beautiful works of art. Something most people probably do not think about is that Champagne glass has a long history in Norway. There was a lot of Champagne drinking here on the mountain already in the 1700th century. Most homes have artifacts from here, and many things are now heirlooms that have followed generations. Still, many people do not know that things they have are from Hadeland, and even fewer know who designed them.

- "In the attic here there are only women" -, Elin points upwards and laughs. She elaborates on this by saying that they have dedicated the top floor to female designers. From the 1800s until approx. In 1950, it was actually only male designers. The first female designer Benny Motzfeldt first came in 1954. Nowadays, most female designers. "Women design and men blow," she says. There will be more laughter. "The interesting thing about design is that we think we decide for ourselves what it should look like - but we are wrong" -, explains Elin. - It is the industry and the designers who take care of it.

It is noticeable that Atle Brynestad has a burning commitment and has developed the old glassblowing plant on Hadeland into something far more than it originally was. How was it here when you took over and what was your motivation for pursuing this further? - «When I started here in 1986, there was a barbed wire fence around the whole area. Everything was closed and you could not see what the craftsmen were doing. The production still takes place according to the same methods as over 250 years ago "-, Atle Brynestad explains. - "It was very important for me to share the history and cultural heritage with the general public and show what the place stands for. Most people in Norway have a relationship with Hadeland Glassverk and I grew up with glass and vases from here. It has been and still is a very important player at Jevnaker, as the oldest craft company in Norway for 255 years in total. We are clearly taking care of the industrial history and the buildings "- says Brynestad

- «The first step was to open Glasshytta to the public. I wanted everyone to be able to experience how the glassblowers' work takes place up close. Seeing glass that keeps 1100 degrees being taken out of the oven is an experience. The art of glassblowing is an exciting and demanding work that requires great precision and stability. The craftsmanship has been passed on for several generations here, he says proudly. In the next round, we opened a glass museum here in the area. We have also had two big anniversaries here. King Olav himself was present during the opening of the 225th anniversary in 1987 "-, he says proudly and adds that it was therefore a great honor for us that King Harald visited us during the celebration of the 250th anniversary in 2012.

A year of preparation

It must have been an extensive process to plan this exhibition? Atle nods and confirms that it has been a painstaking work that has taken over a year to prepare: - «We took over a large archive over 30 years ago that has been painstakingly reviewed and put in place to be able to present this exhibition. We believe we have somewhere between 20 and 30 models that have been created through the ages in this archive. It is an incredibly large ocean to take off. It was a strong desire to showcase the good designers and artists who have always worked at Hadeland Glassverk. GLASS is a story sewn together about everything that has happened here and the people behind it. It is with pride that we can now share the story and many of the great works that have been done through the ages »-.

The trend is reversing

- «It is noticeable that local crafts and traditions are beginning to have a renaissance. At a time when the focus is on environmental friendliness and the short journey, it is no longer just cool with everything that is foreign "-, Atle Brynestad explains enthusiastically. - «We notice that the trend is about to reverse and the youth is coming back. Everything was not better before and we are still just as good "-, he concludes with a sly smile.

The spiral vase gets new life

Willy Johansson won awards at home and abroad for his designs. His grandson Martin Johanson, produces for the occasion the famous Spiral vase from 1951, together with the glassblower team. The circulation is limited and the vases will be signed and marked with the production year 2020, so that they will not be confused with the Spiral vases from 1951. The vase can only be purchased in Gallery 1.

- "New for this exhibition is that we offer guided tours" -, says Elin. How about an exciting "Historical walk", focusing on the older history? - "Norwegian Glass Design through history" or "Willy Johansson, a life in glass" is a tour with his grandson and fifth generation glassblower Martin Johansson. - «We hope that many of the readers will visit us. Here are activities and experiences for young and old with many restaurants, shops, concerts, children's farm and shows. Visitors can cast their own candles or see both glassblowing and grinding. Blowing glass yourself is the best memory children and young people can get from the glassworks. This year, for the first time, you can blow colored glass, and the selection has never been greater when it comes to models. With two large parking spaces, there is also plenty of space for large donations ", concludes Elin.

Hadeland Glassverk follows all guidelines in connection with Covid-19 and refers to Facebook or their websites before a visit, for updates on opening hours.