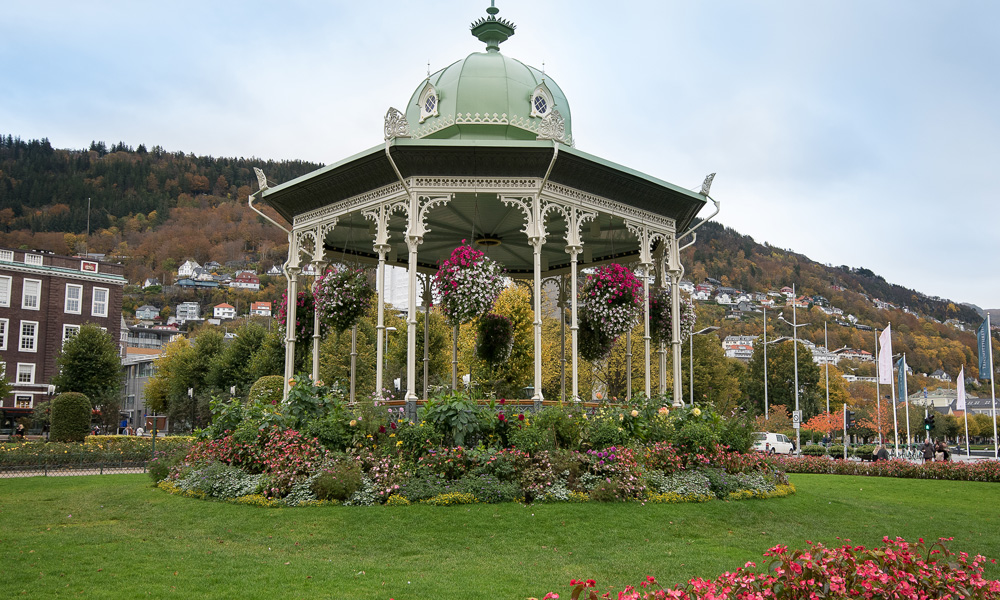 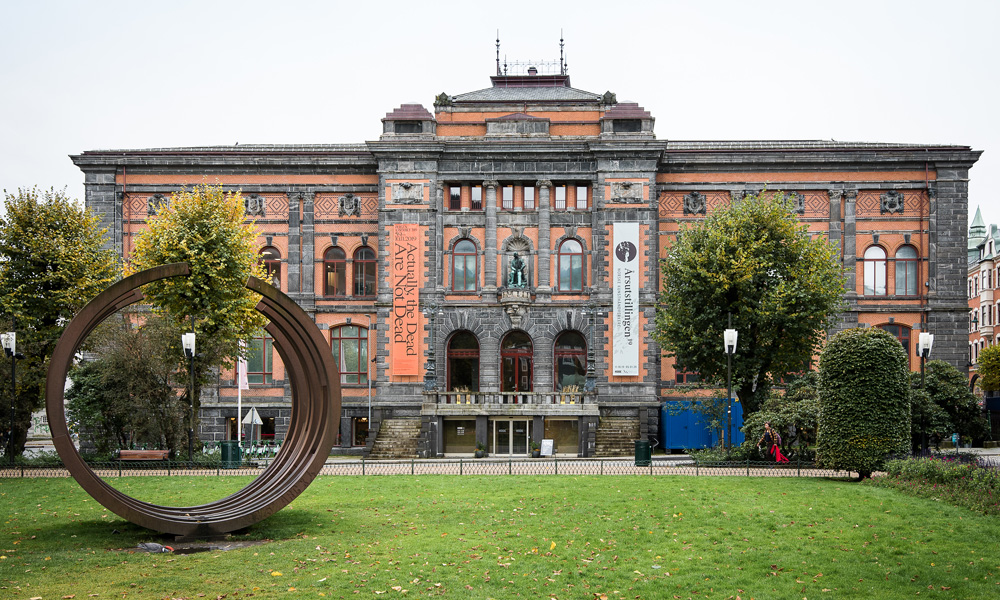 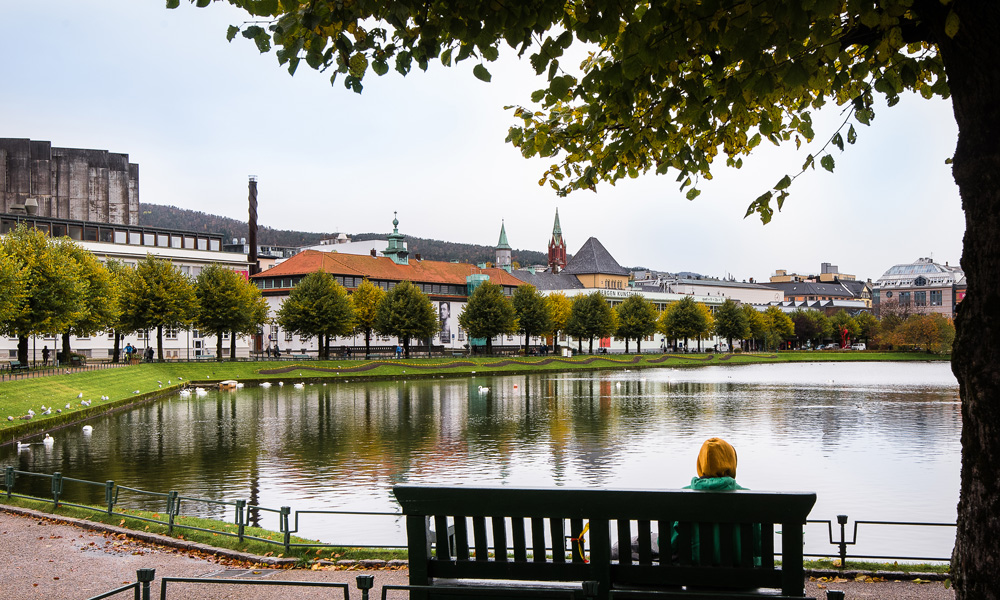 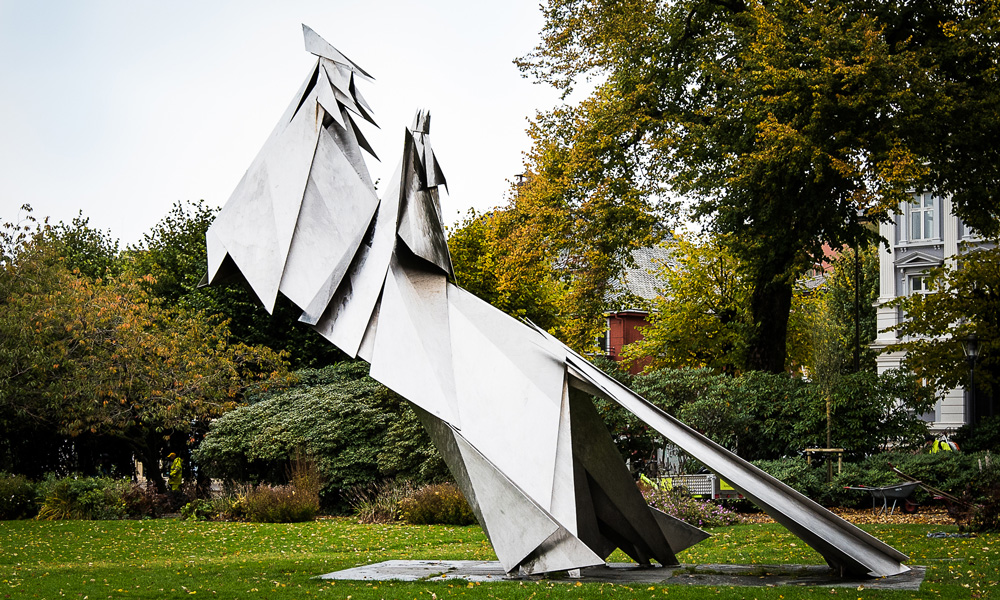 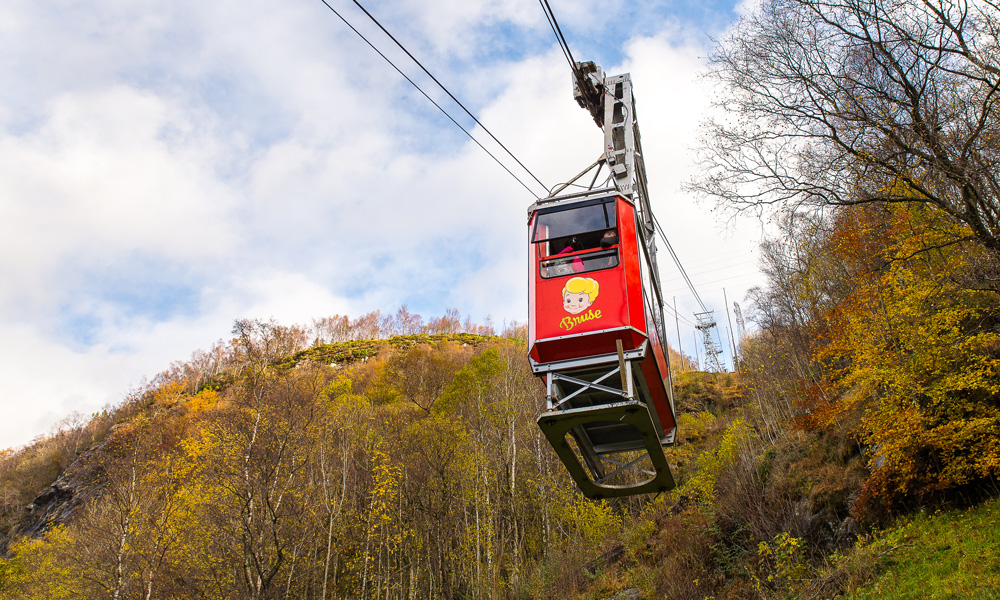 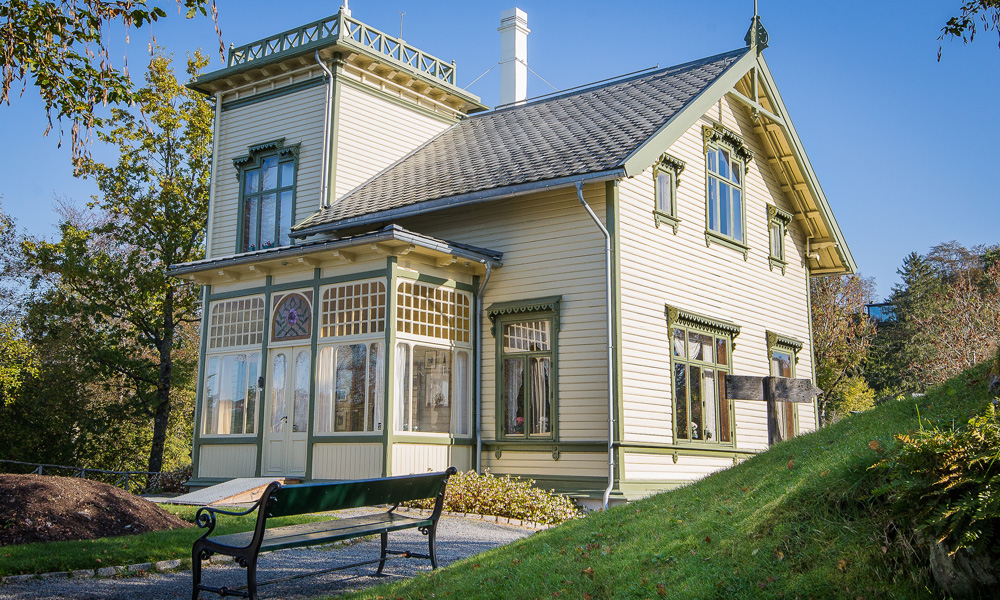 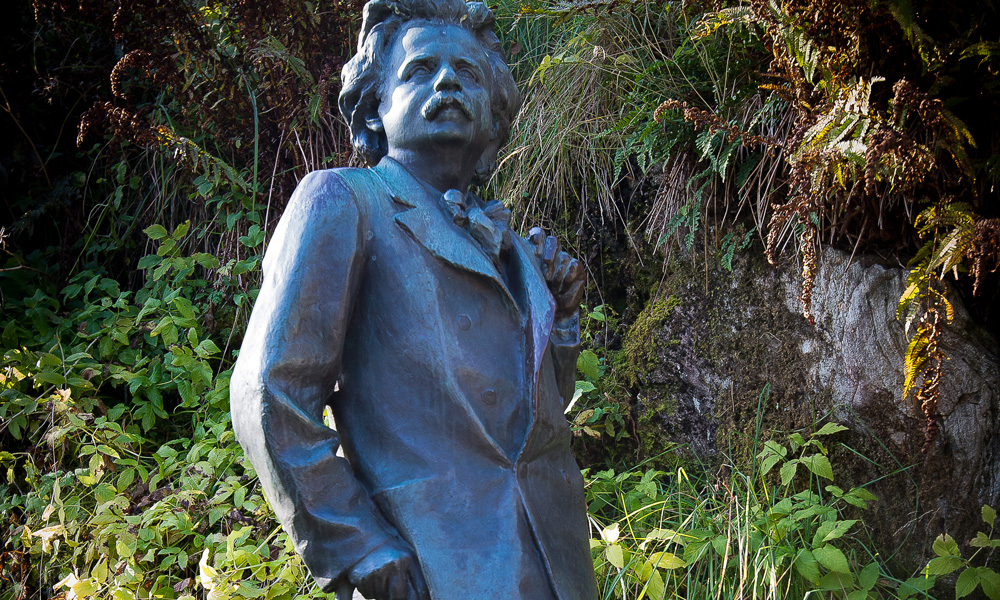 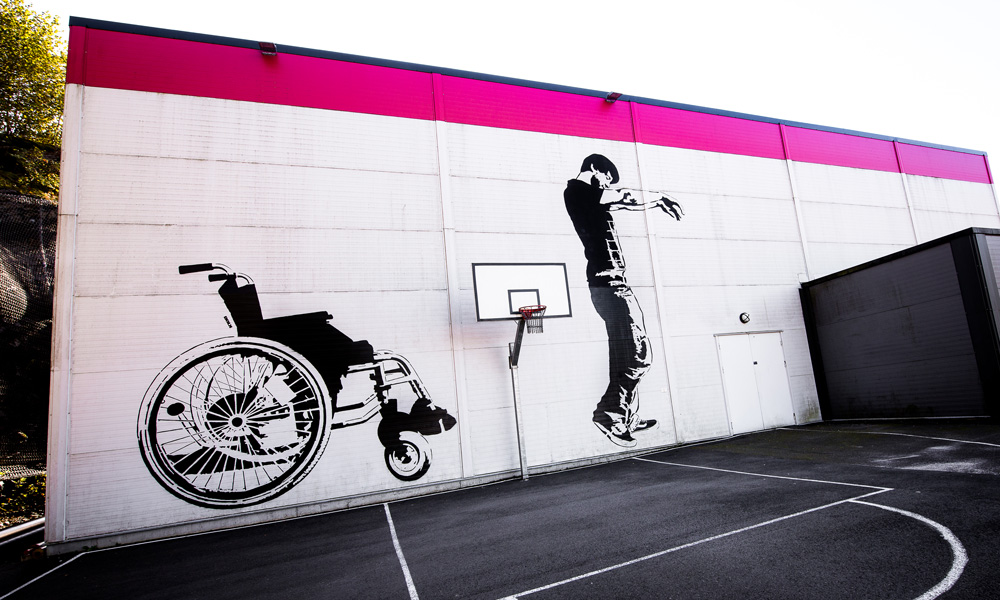 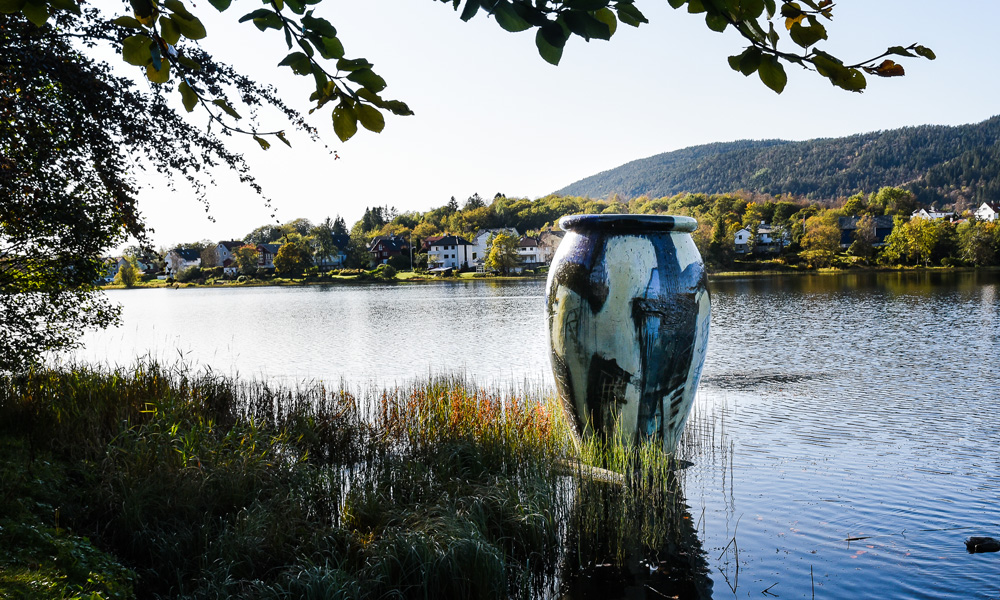 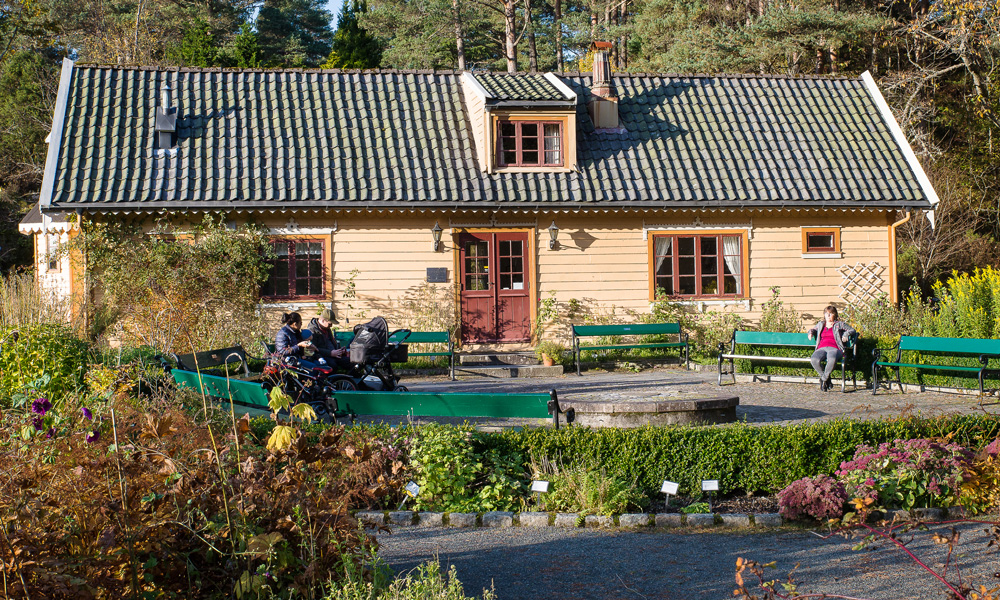 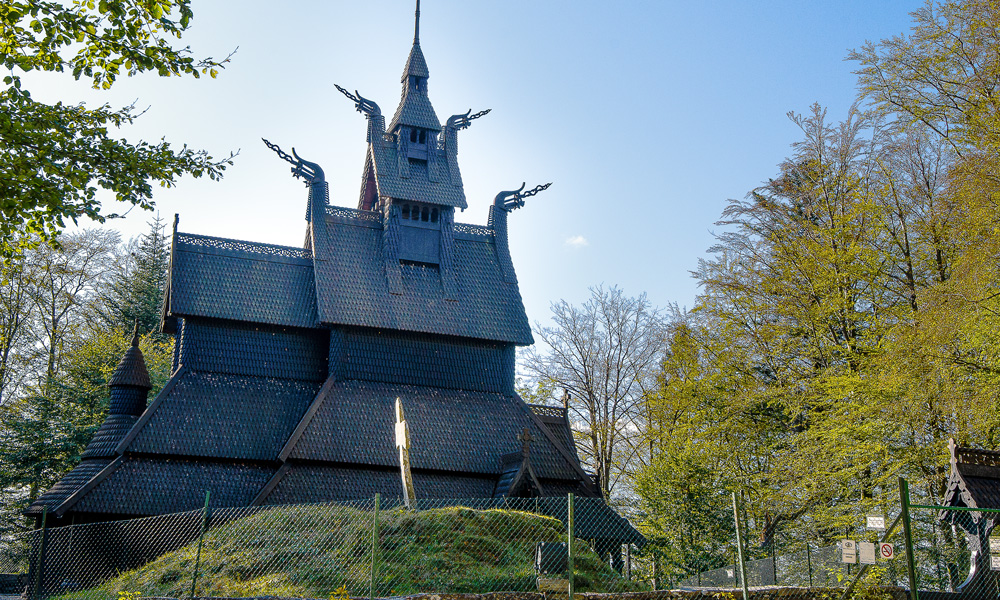 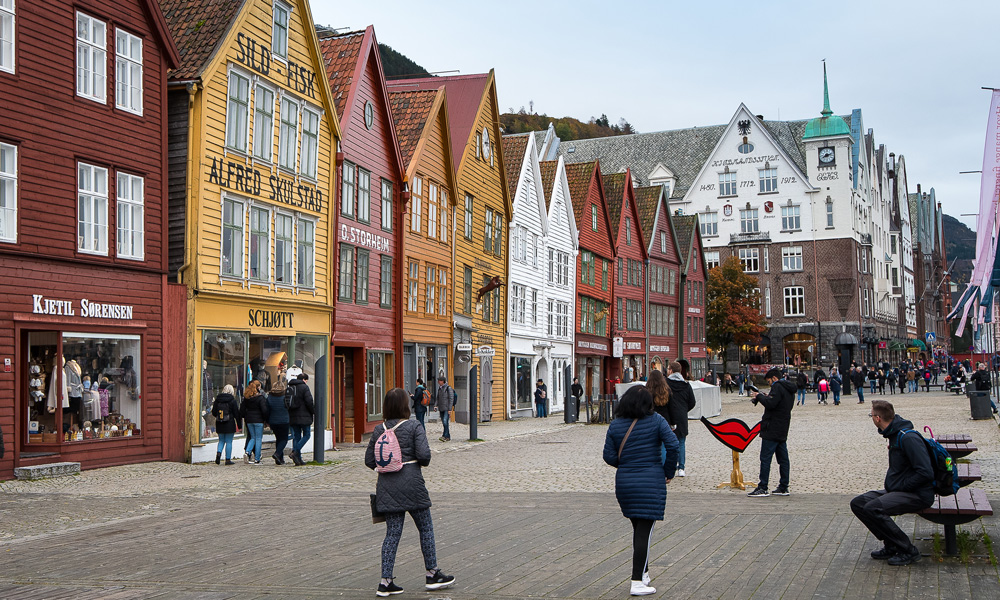 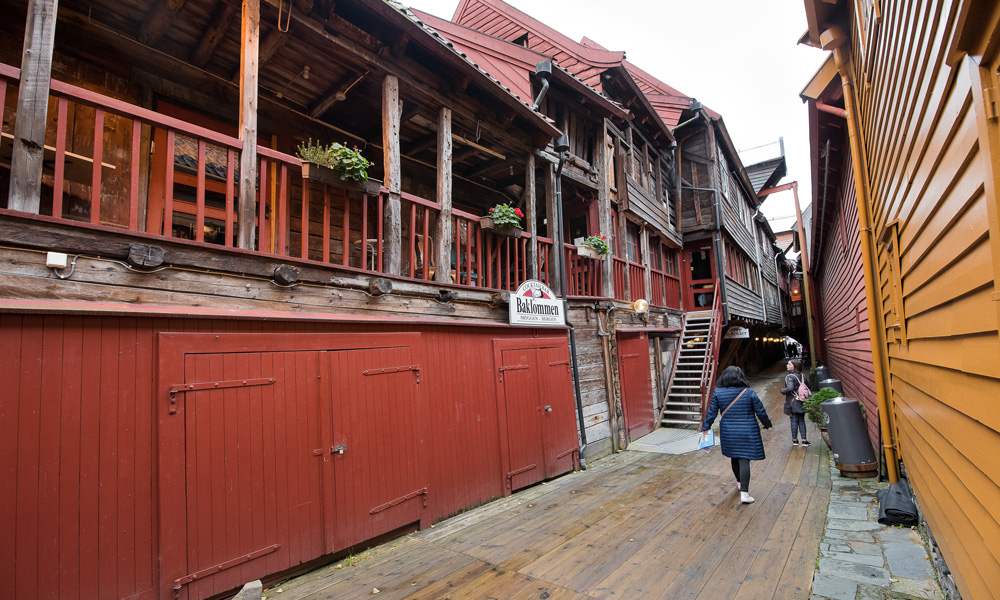 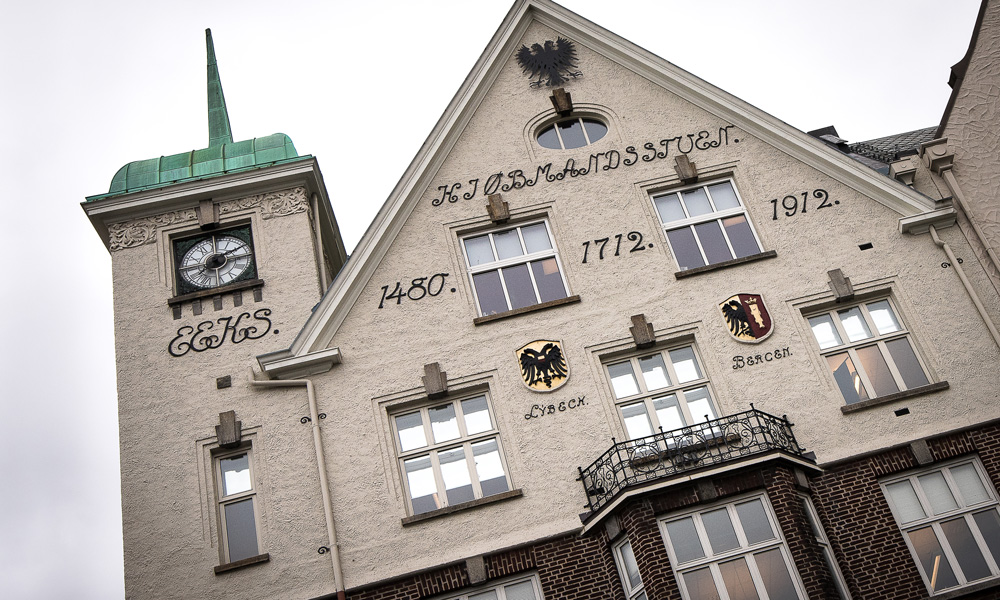 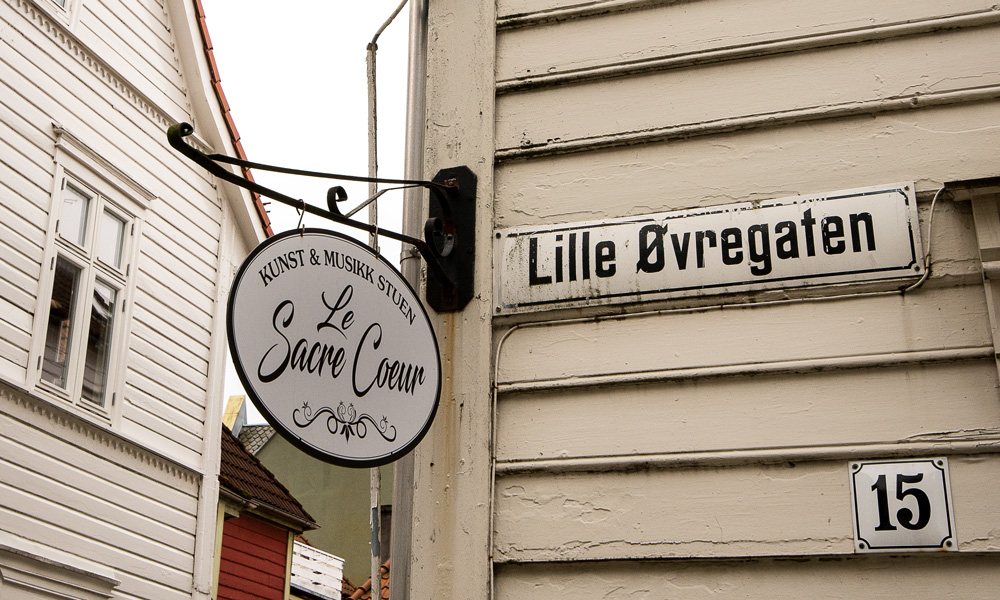 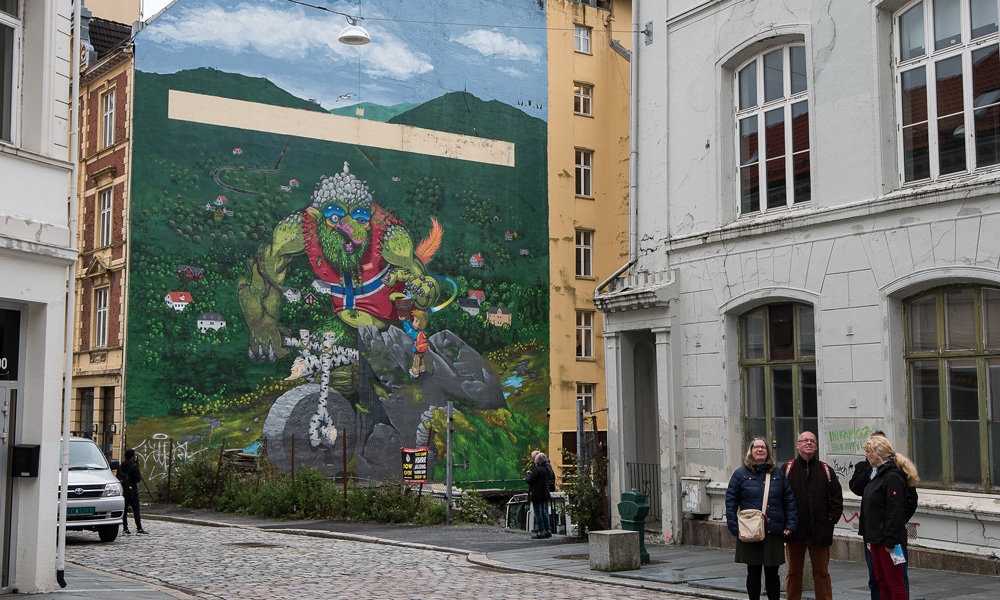 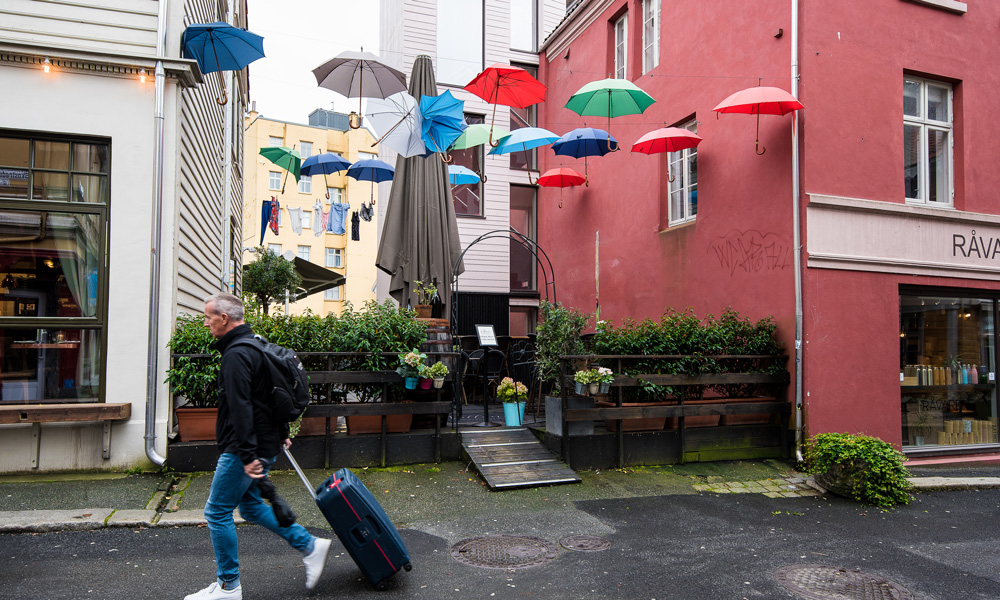 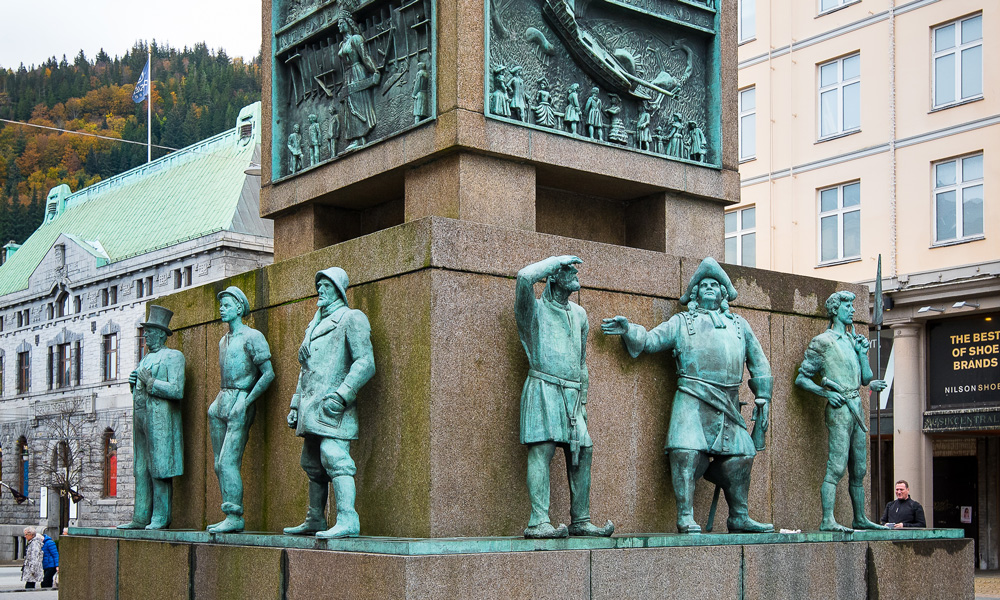 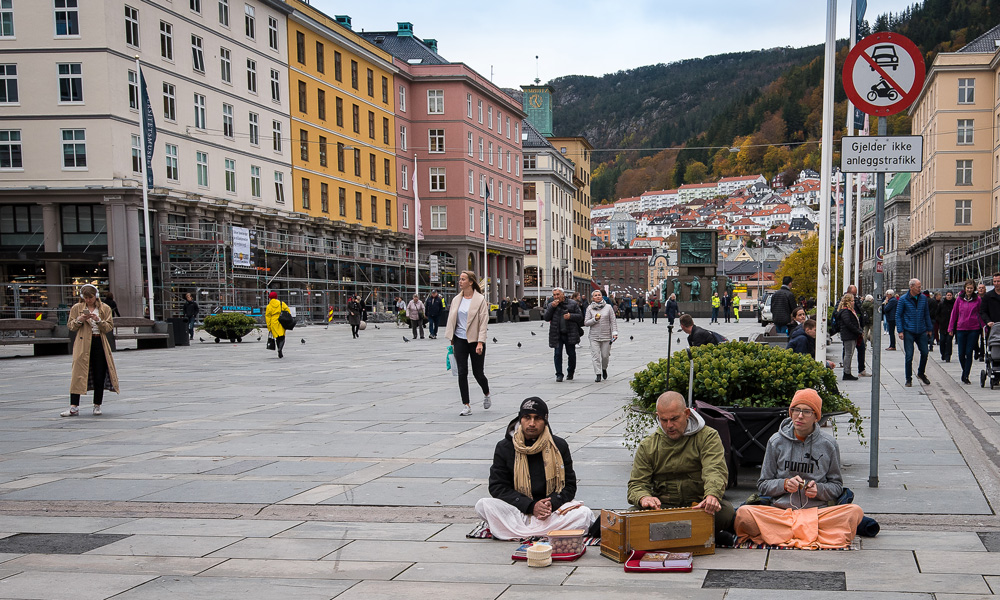 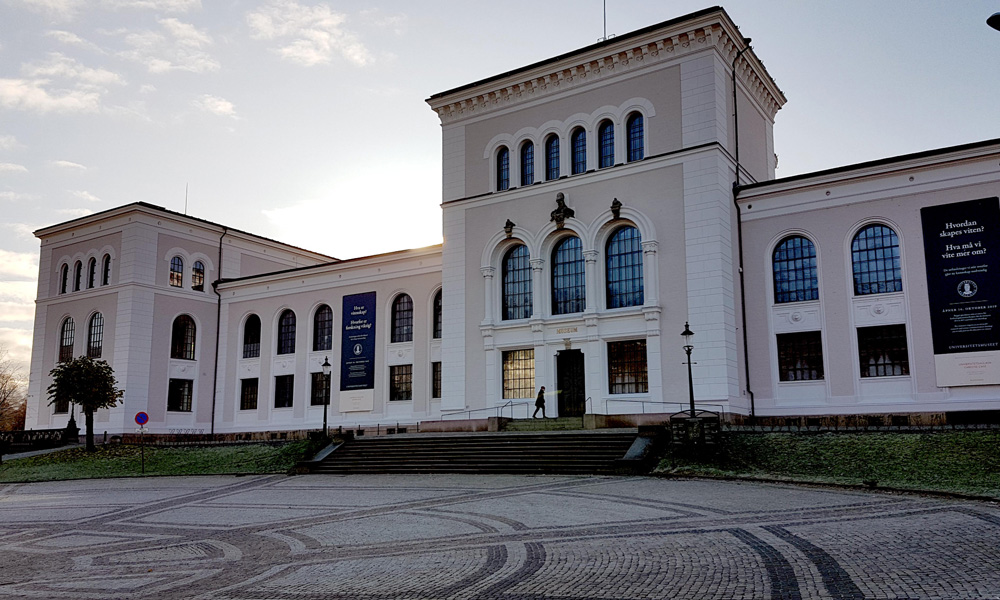 Travel reports from Norway
In 2020, Bergen celebrated its first 950 years. And the people of Bergen can make folk festivals when good forces are released. But there are also plenty of other reasons to visit the city between the seven mountains.

Midsummer is the innermost city center in Bergen a wonderful witch's cauldron. Guided Asians and free-ranging Germans step on each other's heels, past and through Bryggen, they watch in droves between the tent stalls on Fisketorget, stomp in line in front of Fløibanen and stretch their necks for a glimpse of penguins and seals in the aquarium at Nordnes. This string of pearls of nostalgia and the present is the light trail in the tourist magnet Bergen, but the camping tourist should be more daring than the mass tourist. The motorhome people who manage to grab space at Bergenshallen have landed in the middle of nowhere. A few kilometers away is Fantoft Stave Church. Use a bicycle or your legs because here the tourist buses own the land in the high season.

The stave church is located where it has been since 1883 after it was moved from Fortun in Sogn to Fana. That is, it is not the building with history from 1150 you admire, it is a copy that was rebuilt after the eerie church fire in 1992. Drama and history in the most beautiful surroundings. The church was privately owned and it was the owners who rebuilt the stave church with materials from the primeval forest in Sogn. Foresighted people had taken care of the drawings so the new copy is as original as possible, and inside observant people will find remains from the old church building. Wandering camping tourists will discover that stave churches named after the construction method are found in several countries in southern Europe.

More goodies in the butter eye. Along the nearby Tveitevannet is a beautiful hiking trail, suitable for both summer lovers hand in hand, sweaty joggers and cyclists. And here the gaze will catch a huge pot right on the shore. The sculpture is signed by the diverse southerner Kjell Nupen. Not far from Bergenshallen is Fysak, a free offer for young people who need to challenge skills and physics. If a rainy day occurs and restlessness is felt in the youngest of the travel party, Fysak is a place where energy is drained. The wall at the entrance is adorned with street art signed Dagger himself, and the symbolism is beautiful. Physical activity is for everyone.

Street art is today's expression in the youthful anniversary city. Most people in Bergen are proud of these known and unknown creative souls who add new elements to the city's identity. Use your eyes. The jubilant has fostered many world celebrities in music in recent times - it is enough to mention Kygo and Alan Walker, but at least as wide-eyed is Edvard Grieg. He lived on Troldhaugen and here the man with the tousled hair weave and lush beard created music that enchants the world over. He composed in a red-painted small cabin down by Nordåsvannet. The master is buried in the mountains with his beloved Nina. The summer concerts are a safe recommendation.

A few miles further south of the city center is the Arboretum, a place where plants from all corners of the world are gathered. Easy to park both regular car and motorhome. Well-kept hiking trails crisscrossed by exotic and magical trees that lead to two well-arranged bathing spots. But you can not get around the colorful Bryggen in the wooden house town of Bergen. The houses have been restored over the decades. Millions have been spent on a years-long and unique rescue operation. Archaeologists have dug themselves down and back in history. Houses have been raised so that neither spring tides nor climate change with rising sea levels will threaten the world heritage.

Bryggen's place on the UNESCO World Heritage List gives the status and travel industry something to use as bait. Cruise tourists meet the distinctive row of houses a few hundred meters away from the gangway. Critical voices now speak loudly about over-tourism and wear and tear on what the Hanseatic League left behind, but take a look at what was created by a powerful trade union with branches that can be traced in both Germany and the Baltics. Look for years and coats of arms on the house walls along the entire pier side. Bergen has always turned its face to the world, and the city is a popular guest harbor. In summer, every single meter of quay along the pier side of Vågen is occupied by short-haul and long-distance vessels of all sizes and price ranges.

Master food on the coast

Across Vågen, on Strandkaien, a large "box" towers, and inside we find the city's tourist information and tourism director Anders Nyland, who has moved and saved Bergen. What should a visitor spend their time on? The manager himself answers Bergen city center, Troldhaugen, Fløyen, Bryggen and Fisketorget - but adds generously to Fedje, Bekkjarvik and Glesvær, all three places miles outside Vestlandits capital. Nyland has put these pearls under the umbrella called VisitBergen. In the local area, he unfolds a menu of food in international master class and western Norwegian and vibrant coastal culture. Unique is also Cornelius' seafood restaurant located on an islet close to the shipping lane, a half-hour boat trip southwest of Bergen. The term short-haul food gets expanded content after a visit here.

Gold mine for the curious

Short steps outside the light trail await a real and charming center. Narrow and long alleys between wooden houses in long steps up the mountainside. Small houses and small and slightly larger houses, woven together into a patchwork quilt that does not look like something modern city planners will allow. Popular photo motifs and sought-after housing in a high price range with walking distance to the city center's countless pubs, restaurants and coffee shops, the city's arteries. In these almost car-free and picturesque alleys and alleys live the people of the city center, those who think that for many of us there are visitors in the summer.

The town that Olav Kyrre laid out around Vågen is compact and cramped with walking distance to a number of attractions, water holes and shops, a continuous bustling area with its back to the mountains and a window to the west. Gallerigaten along Smålongeren with Bergen Kunsthall and Kode is a destination on the top shelf, similar to the reopened natural history museum at Muséplass, a goldmine for curious people of all ages. The extent of the city's impending 950th anniversary is being debated fresh as of this writing. Should it be celebrated big and popular, ie in a Bergen way, or will the opposing forces that go for a party like the one all other cities can achieve win? The last rematch has not been played, in keeping with Bergen traditions as well.