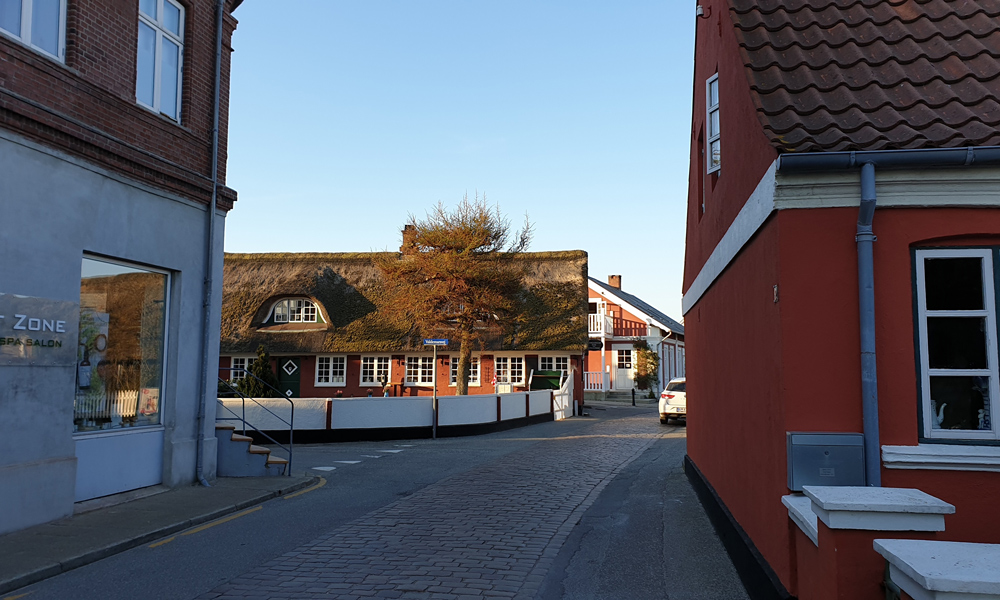 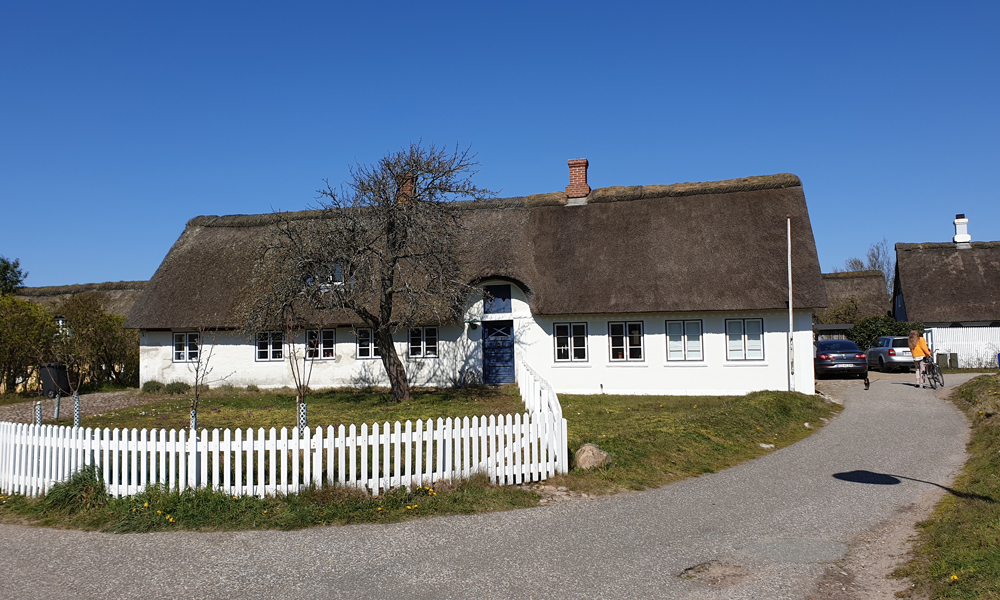 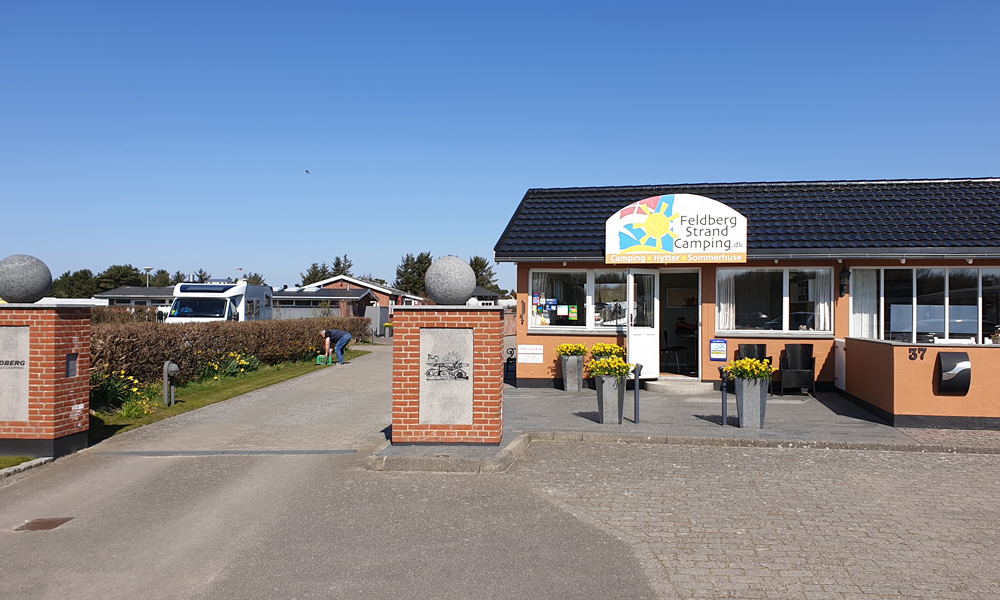 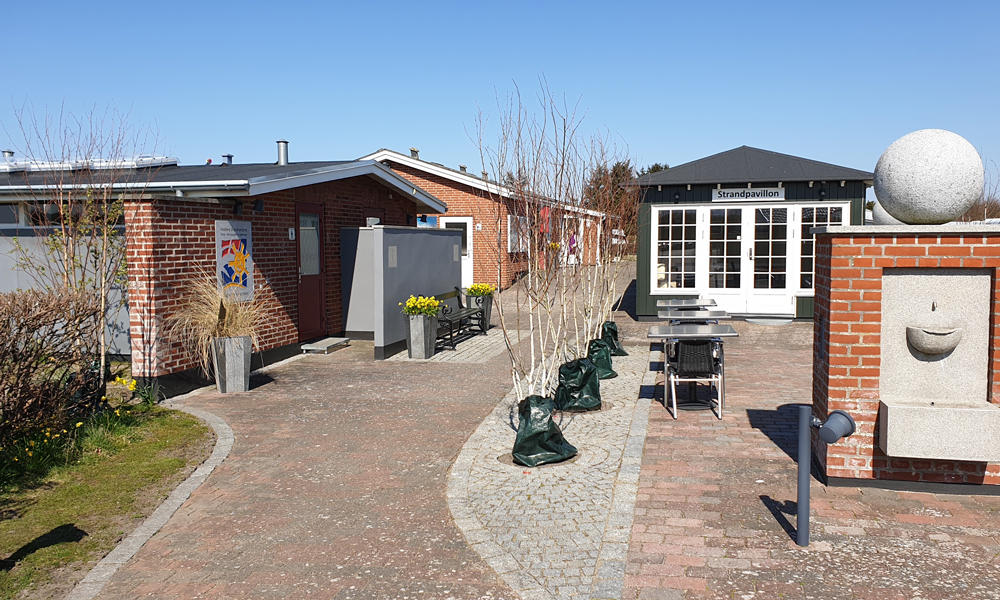 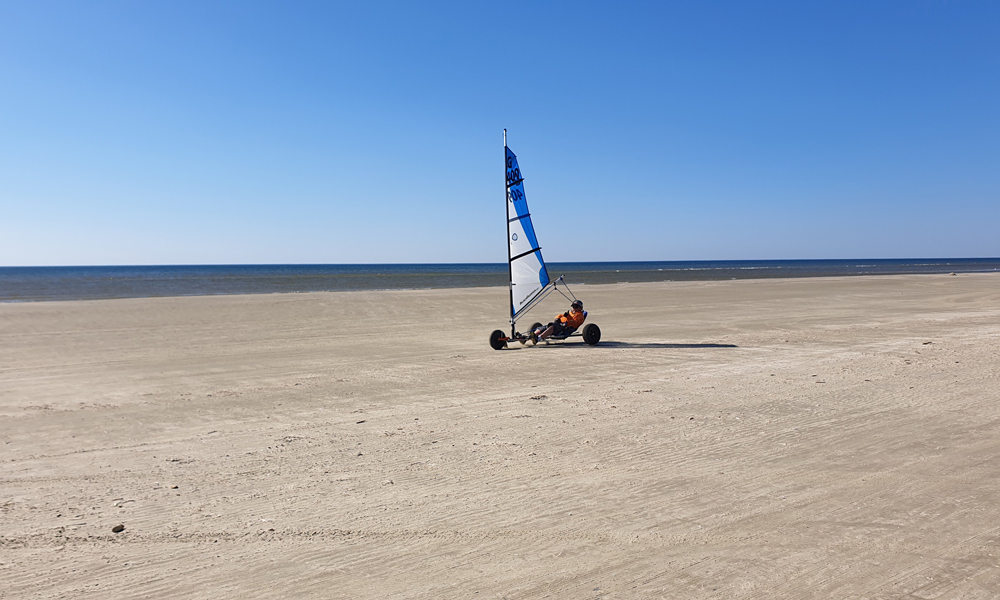 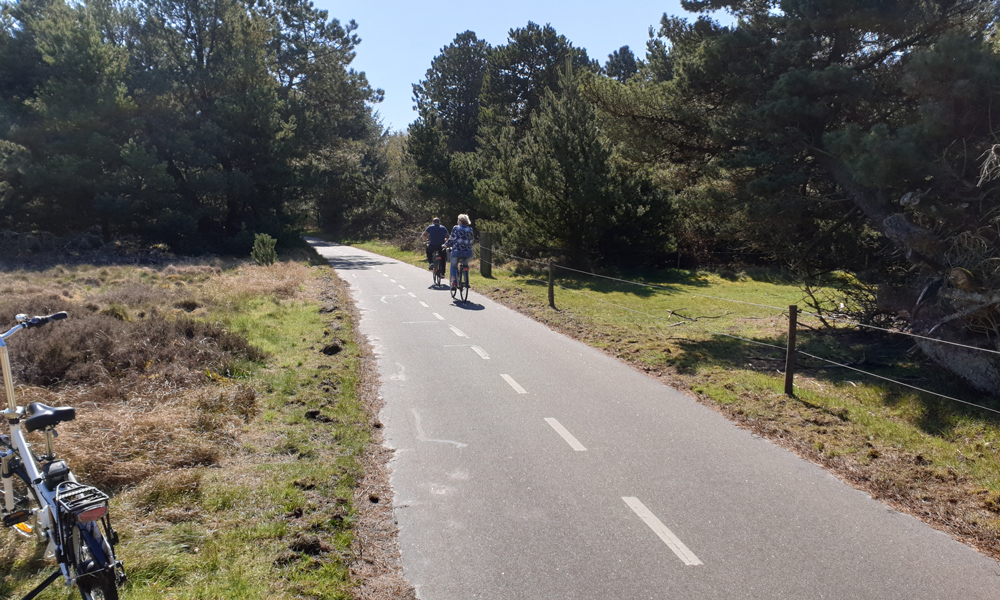 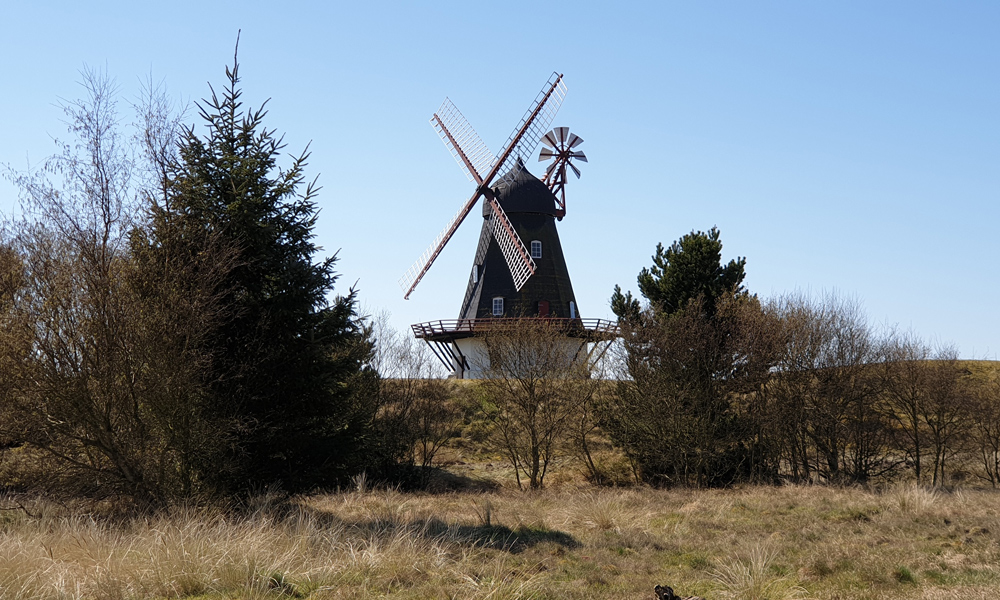 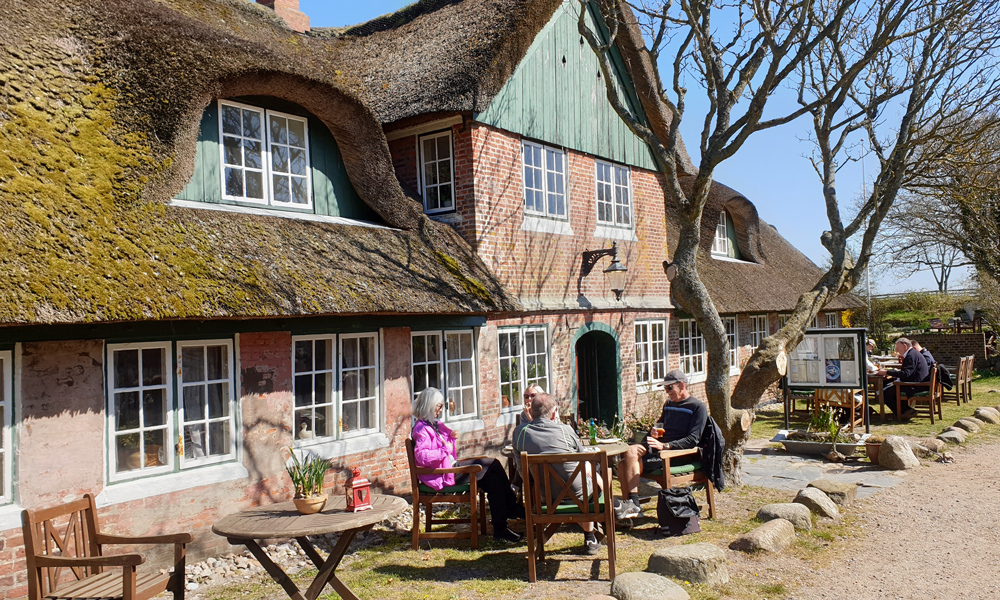 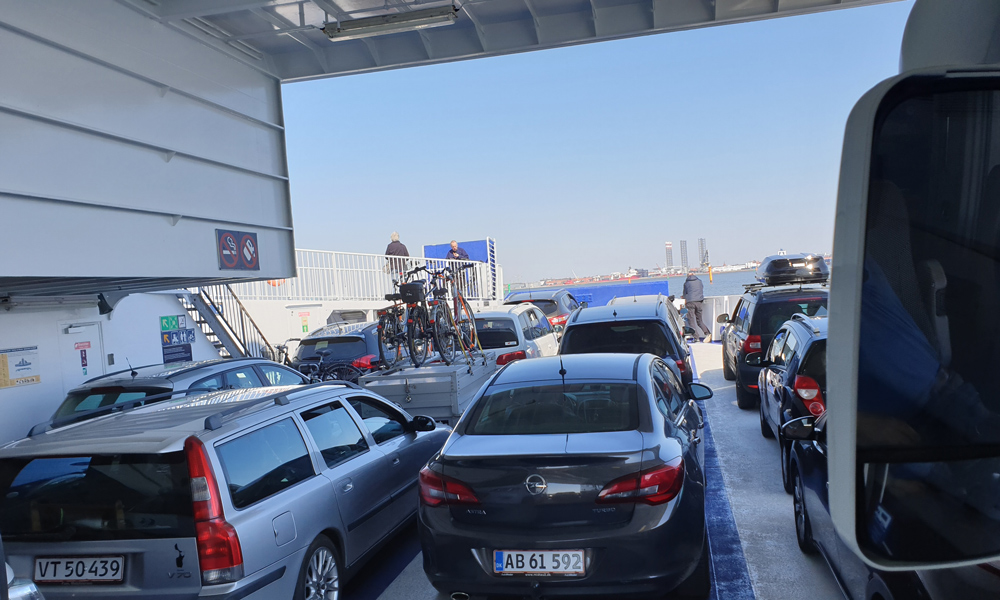 Travel reports from abroad
The island is no more than a sandbar and the beaches change in extent over the years. In the era of sailing ships, Fanø was an important trade hub. Today, Denmark's second smallest municipality has the country's largest number of listed houses from this period

Fanø barely rises out of the sea, but even though the coast is constantly changing, there is no immediate danger of the island blowing ashore. This means that it is also easy to get around Fanø by bicycle. The cycle map you get at the campsite shows you where you can plan your excursions. We hadn't really thought of going to Fanø. Rømø, a little further south, was our southernmost destination in Easter before the corona came. A stop at Virksund camping near Skive changed that. The campsite host there (he with the hourly rate at the campsite) recommended Fanø warmly. A closer look at the island, which we had never thought existed, made it very relevant to visit the island. Fanø does not have a bridge connection or a breakwater as there is out to Rømø, but the ferry only takes 12 minutes across from Esbjerg. The ferry arrives at Nordby, the island's "capital".

Nordby is, as the name suggests, in the north of the island. The town is most similar to a village with many buildings from the 1800th century. Most of the island's inhabitants live here. The other center of gravity on the island is Sønderho at the southern tip. There is about a mile between the two cities. From time immemorial there has been strong enmity between the two towns, and we were told that there are older people in the north of the island who have never been to Sønderho. For most, however, this old enmity is a stage gone by. Sønderho was a strong maritime town and the buildings from the 17th and 1800th centuries show the remains of this time. When the steamboats made their entrance, many people left Sønderho. They lost in the competition against the new ships. The buildings were about to fall into disrepair when the "Copenhagenians" came and bought up the dilapidated houses. Sønderho is said to have Denmark's largest number of listed buildings today.

Only at the campsite

Free camping is prohibited on Fanø. Between 21:07 and 8:9 it is only permitted to stay on the campsites with motorhomes, caravans and tents. The island has XNUMX-XNUMX campsites. We ourselves chose Feldberg beach camping at Rindby just south of Nordby. The name still did not mean that the campsite was directly on the beach, but rather a short walk away. A family campsite with the same name was close to "our" campsite. It is also in this part of the island that most of the camping sites and a mobile home site are located. A couple of campsites are located near Sønderho. One of the first things we noticed was that many of the pitches were without campers, but marked as occupied. We soon realized that many people drive out with their motorhome during the day and down to the beach. The beach on the west side of the island is firm and nice and you can drive on it almost all the way from Sønderho and northwards.

On the beach, many surfers and kiters practice their hobby. A separate area on the beach is marked for those who surf or sail on wheels with a kite buggy. Many of these come with a motorhome. Others choose to stop elsewhere on the beach and use the motorhome as a sun screen to bask in the sun. At Fanø bad is Denmark's oldest golf course. There is also mini golf and tennis courts here. On the beach, there are courts for beach volleyball and beach soccer for the extra fit.

Unlike many other places in Denmark, the beaches here are not in danger of being washed away. Rather, they become wider. At its widest, the beach is 700 meters long. As a result, new sand dunes begin to build up outside the stand. This is how Fanø actually grows and becomes wider over the years.

Now it is not difficult to cycle in some places in Denmark, but here on Fanø it is extra easy. It took 10 minutes to cycle from our campsite to Nordby. It was about a mile to cycle to Sønderho. We chose the cycle path along the main road down and cycled straight home. It felt like it went by in an instant. Fanø plantation is a large forest area in the middle of the island. The area is state-owned and there are a number of paths to walk on if you want to get away from the sand and beach. In Sønderho you should treat yourself to a meal at the Sønderho inn from 1722. But that's what many others want to do, so you'd be wise to book a table in advance. The Wadden Sea lamb in a stew was one of the most tender and tasty things we have eaten. The local specialty fried bakskuld (salted and smoked icing, a flounder fish) is also an interesting experience.

To name a few, you will find here a large collection of historical building practices. You should also take a trip to the church with an altarpiece from 1717 and a pulpit from 1661. Fanø Art Museum has a permanent collection of artists connected to the island as well as changing exhibitions. Sønderho mill was established in 1701 when the priests received the king's permission to grind grain. This was in operation until 1923 and is today a museum. At the restaurant Nanna's living room you will find Fanø's tile museum based on the decorative tiles the sailors took home.

In Nordby church you will find a baptismal font from the latter half of the 1400th century, but the church is from 1786 and was restored almost 50 years ago. Otherwise, you should take a stroll in the streets and enjoy life on the harbour. 50 meters from the harbor seals are often found on the sandbanks. Fanø is a holiday island, but you can walk or cycle to the ferry and take it to Esbjerg. You can get your groceries on Fanø, but if it's windy it might be an alternative to take the ferry to the mainland to get a dose of city life if that tempts you. Our camping host told us that he rarely sees Norwegians as visitors to the island. Most Danes and Germans come here. But some Norwegians have discovered Fanø. He says that every year he is visited by a group of campers from the Stavanger area, but at Easter we did not see a single Norwegian car on the island.

The ferry trip from Esbjerg to Fanø took 12 minutes and cost 220 Danish kroner (2019). Then the return ticket was included. This price applies to motorhomes up to 12 meters in the low season.

In the high season (10 June to 11 August) you have to pay a little more than twice as much. Motorhomes under 6 meters save a few tens in the high season. The ferries to Fanø run continuously and usually with a departure every 20 minutes. Nevertheless, there are sometimes queues. A little early in the afternoon on Wednesday in Easter week, the waiting time was an hour. On the return trip on Good Friday, we drove straight onto the ferry, but those who had planned to go to Fanø that day probably stood in line for three hours before they boarded the ferry. So there is a lot to be gained by not hitting the times with high traffic.

Local residents have their own queue for the ferry and get priority on all departures. Of the nearly 3400 inhabitants on the island, around 700 commute to work in Esbjerg every day and a couple of hundred the other way. Although the queue for the ferry can be a challenge, it is often manageable. If the queue is too long, you can wait until another day...