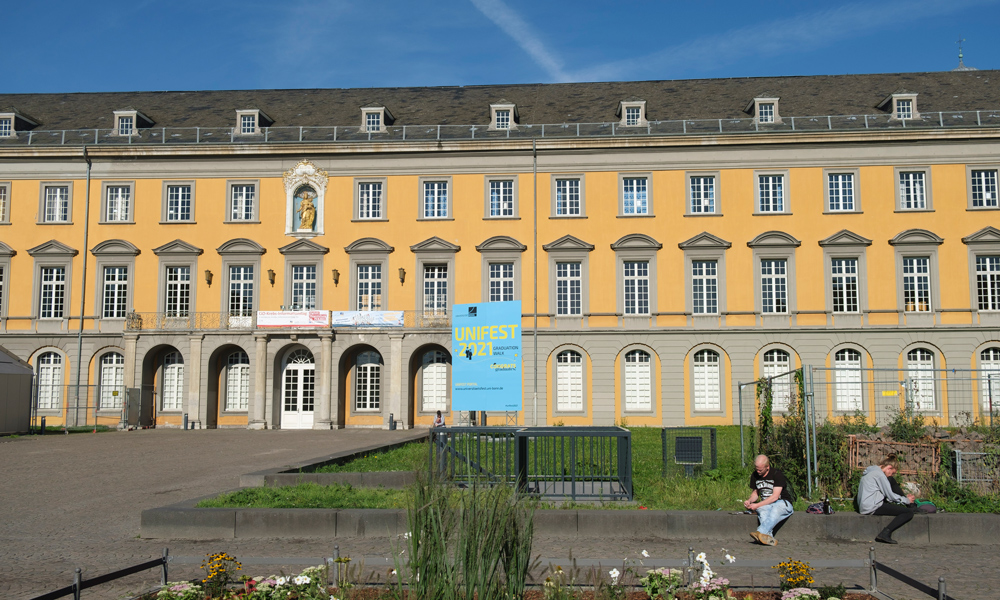 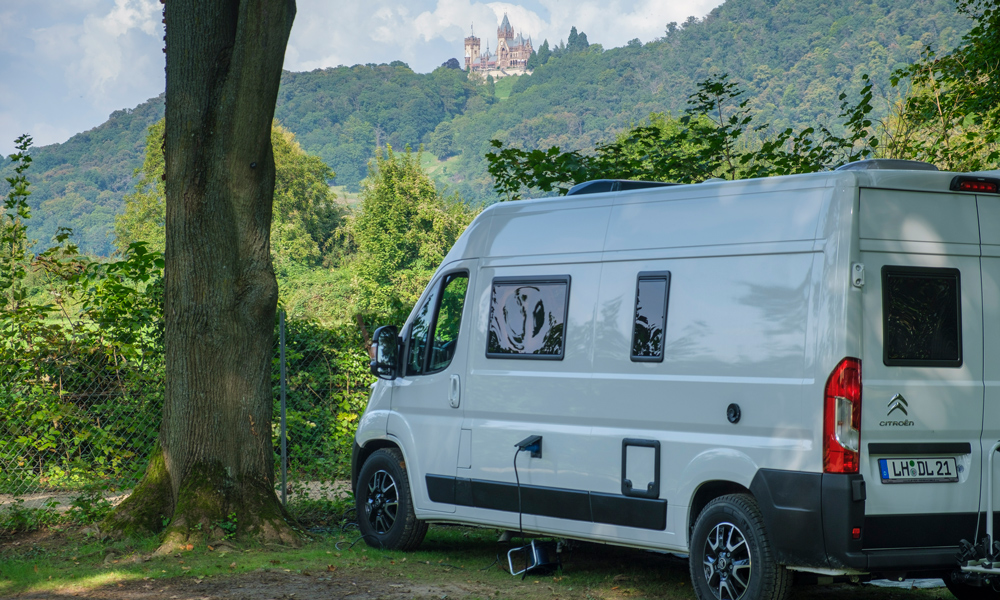 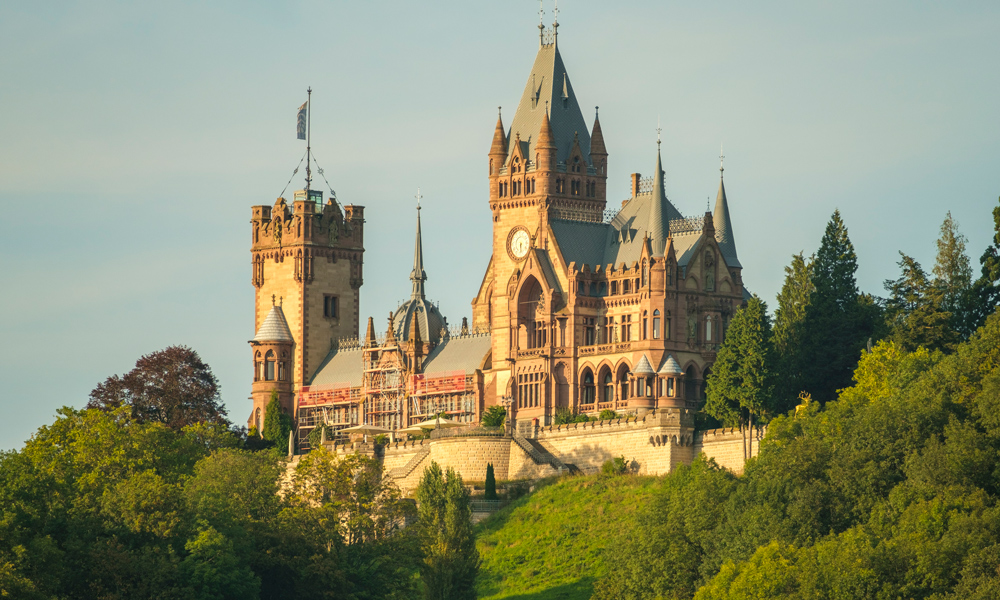 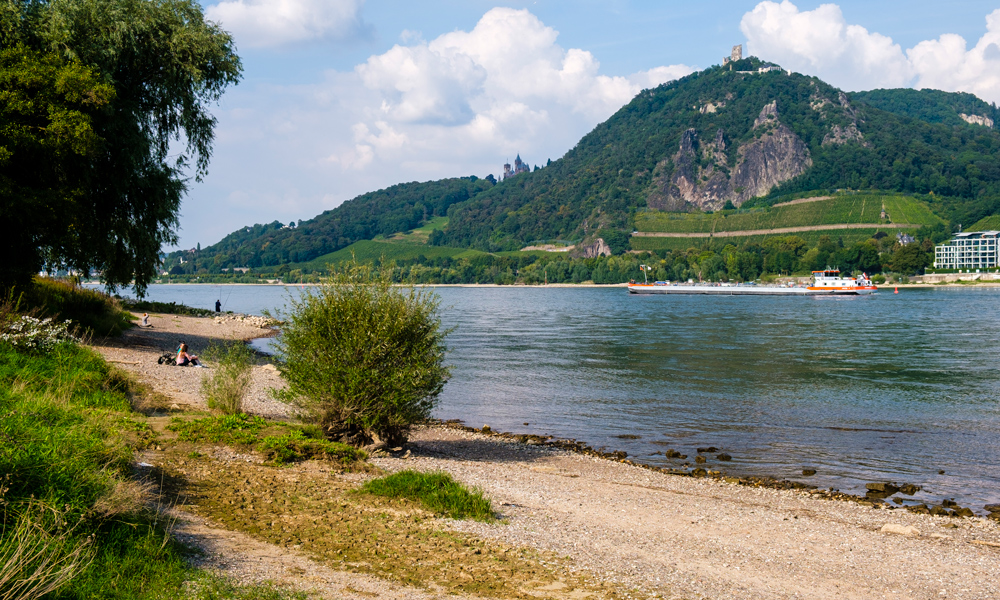 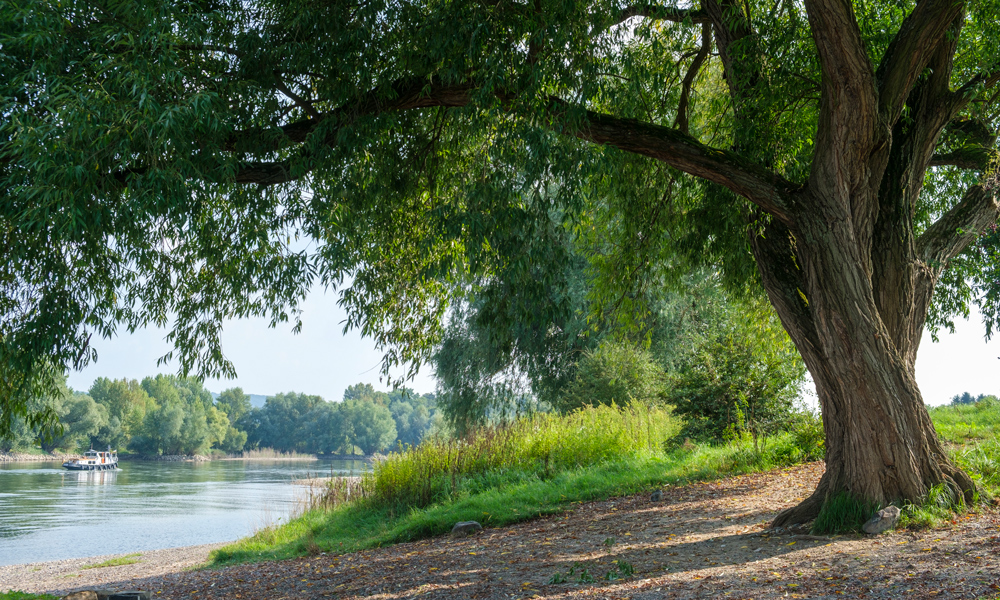 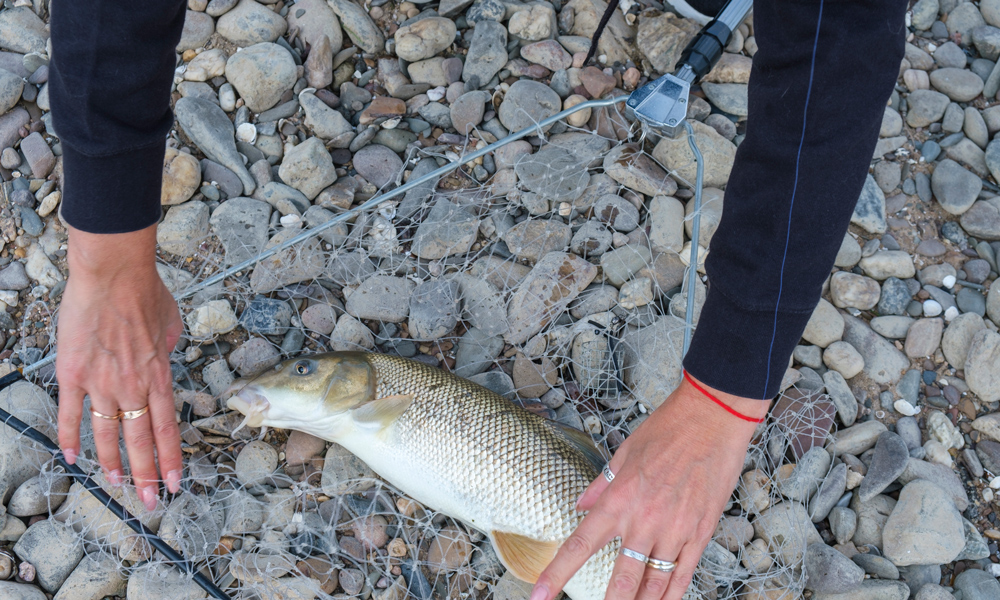 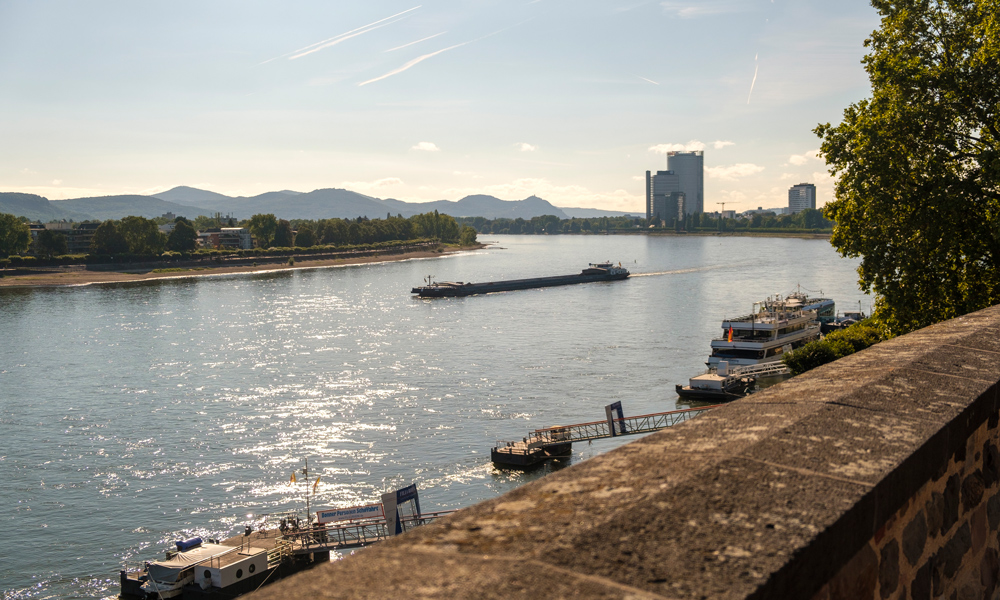 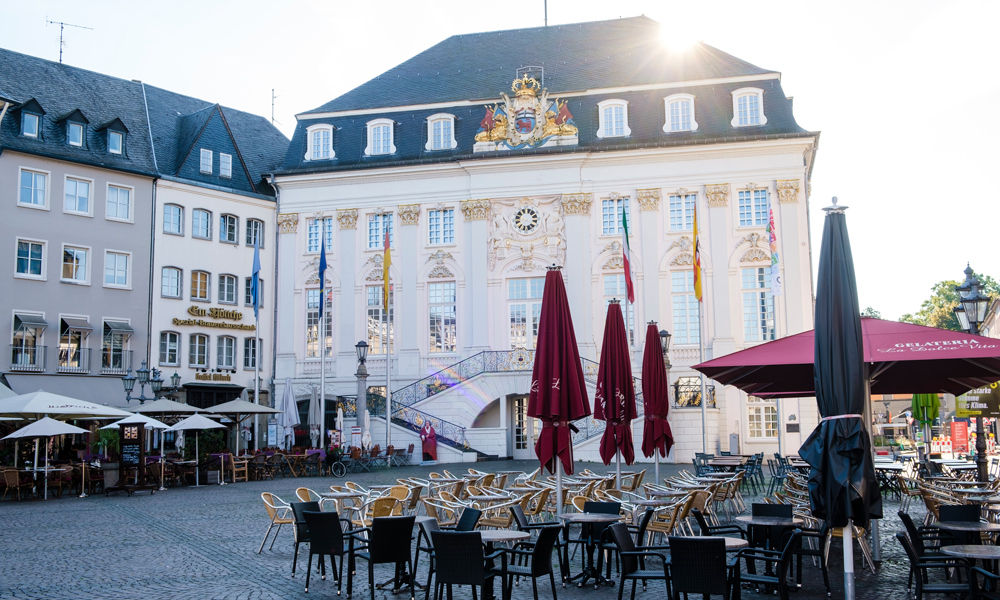 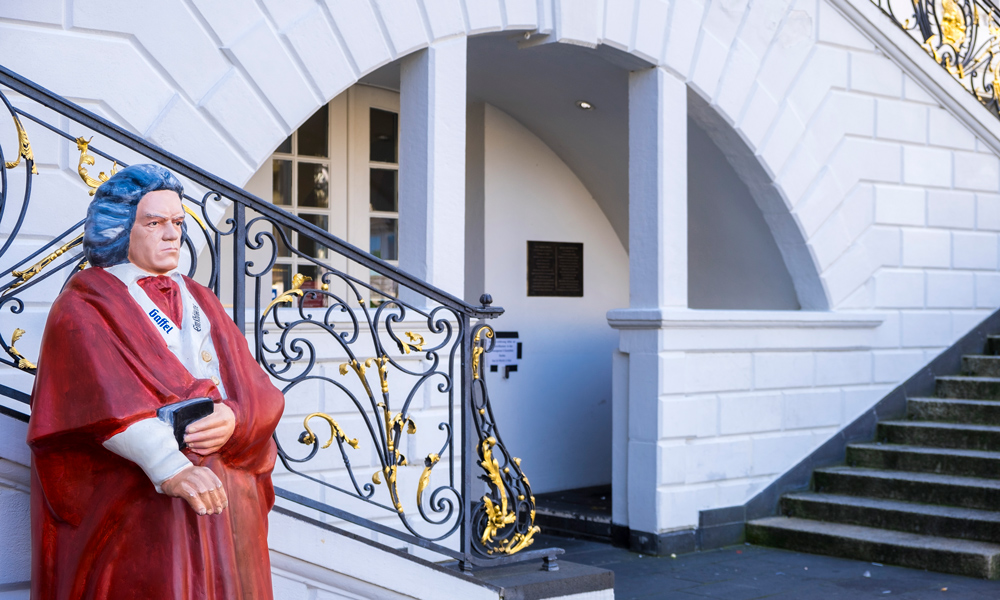 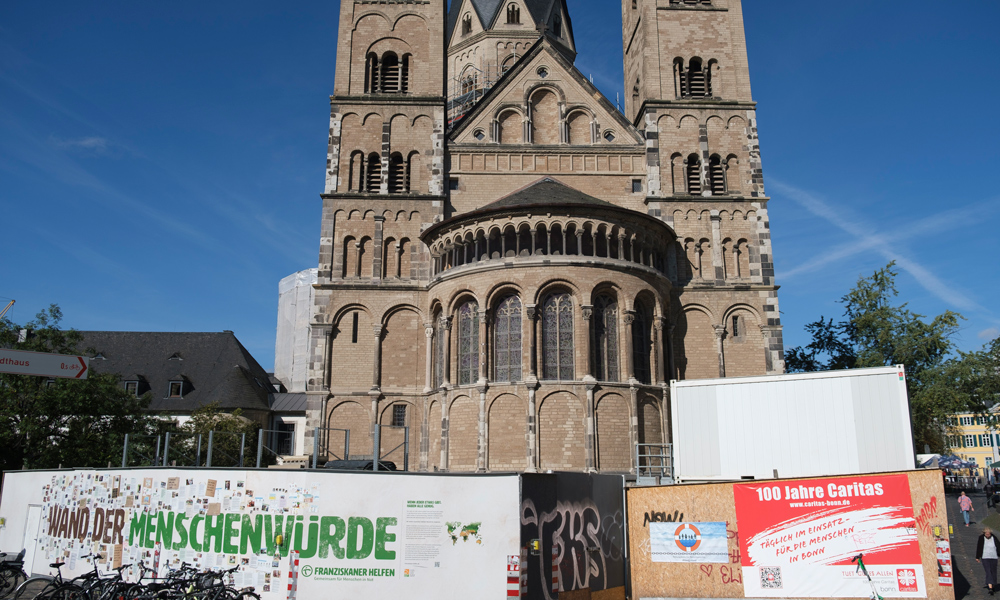 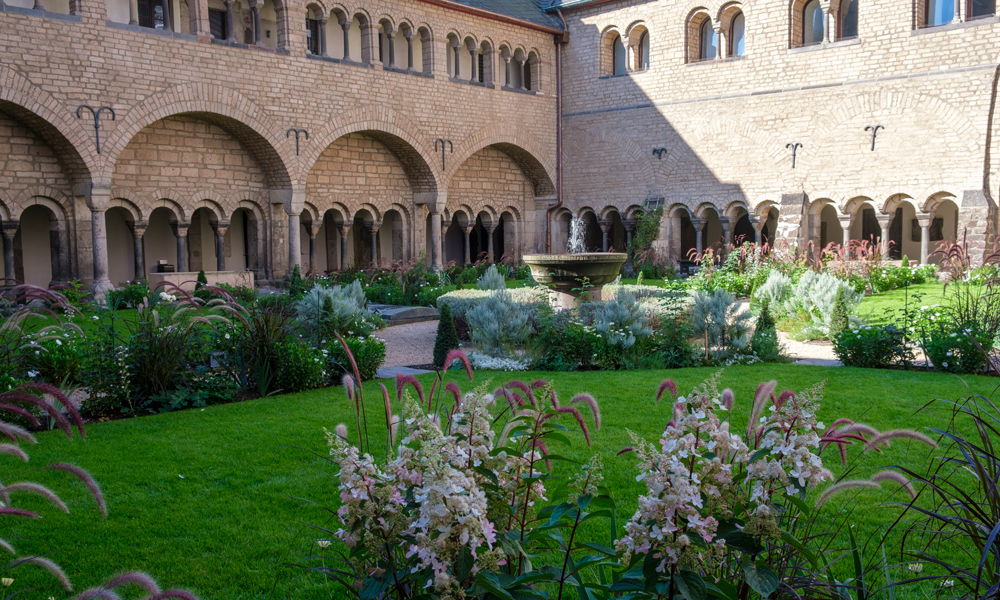 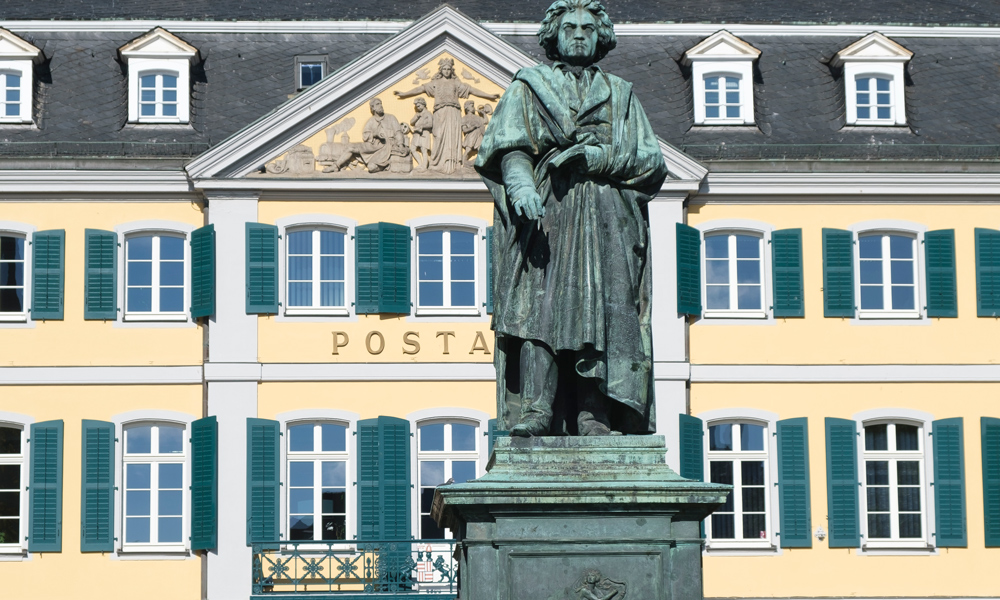 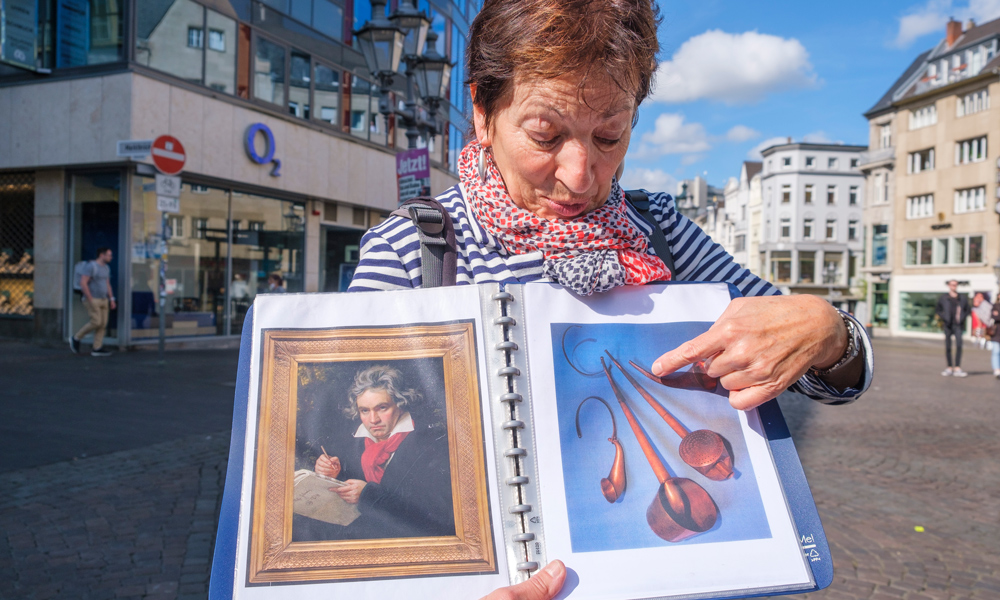 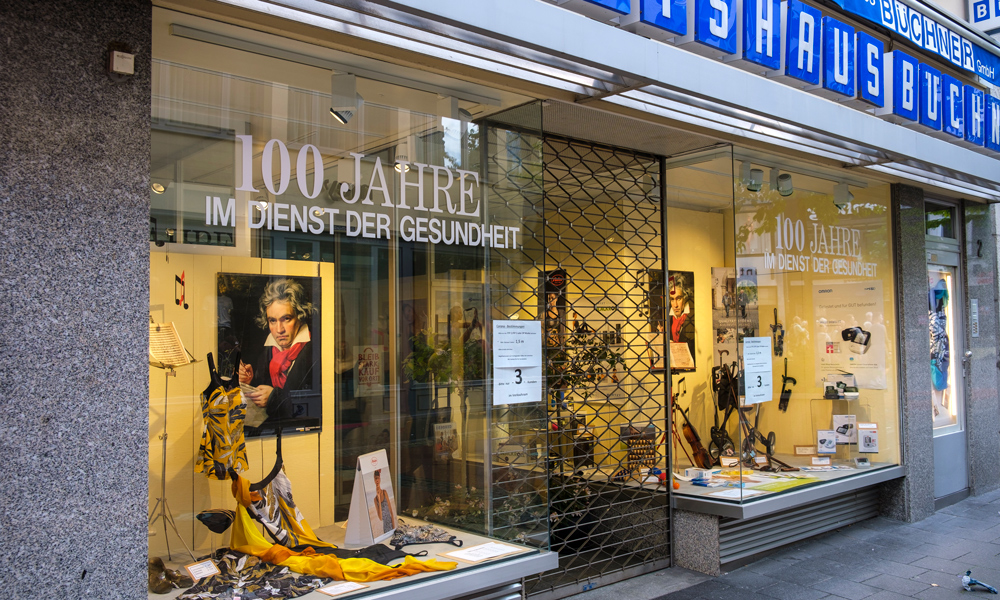 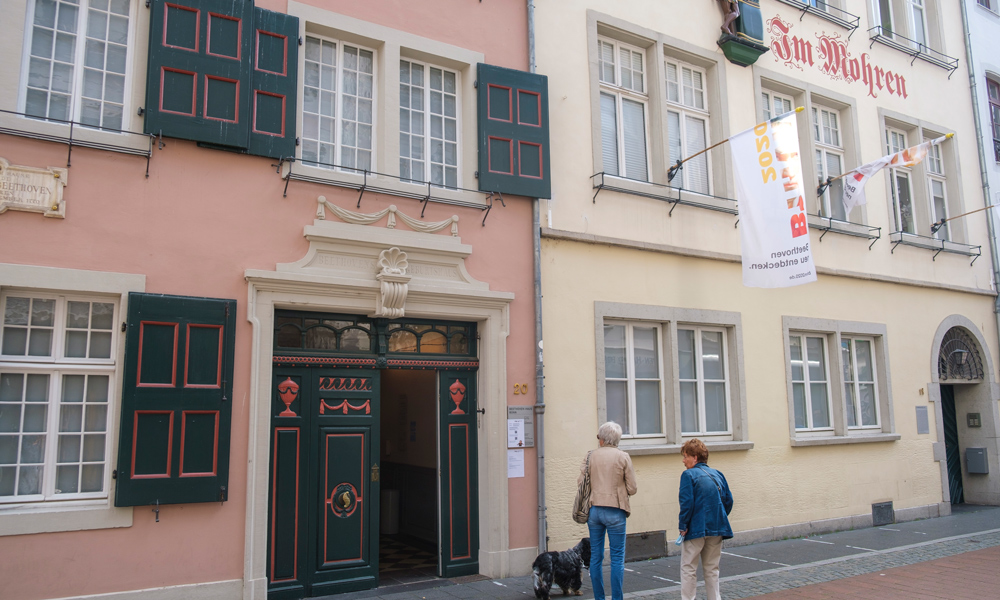 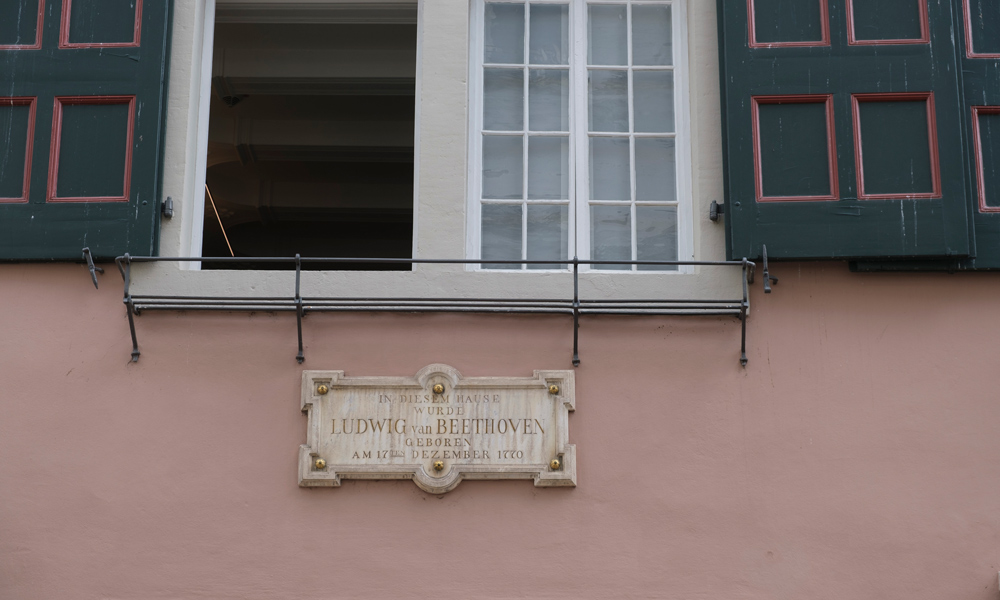 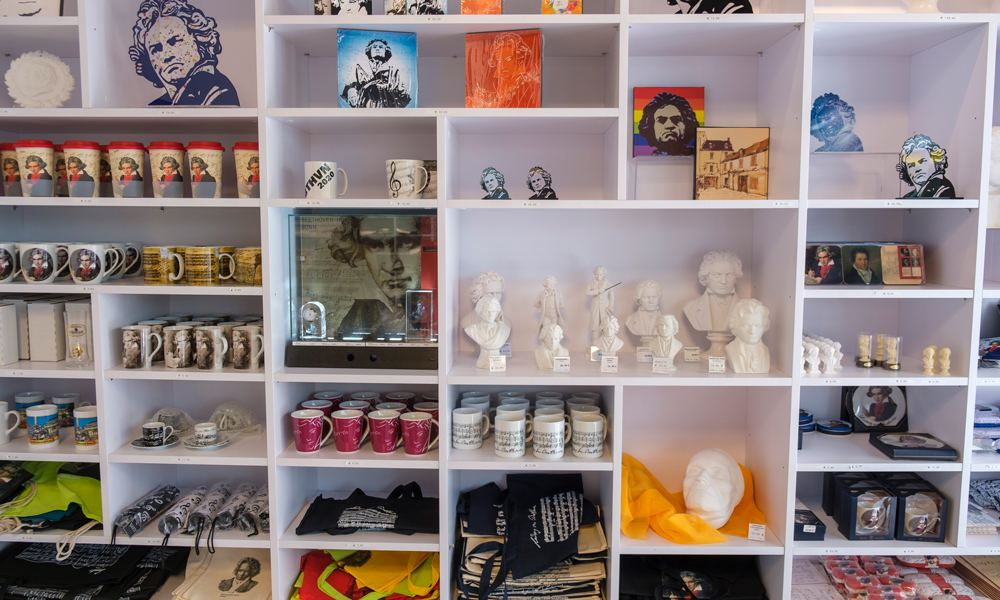 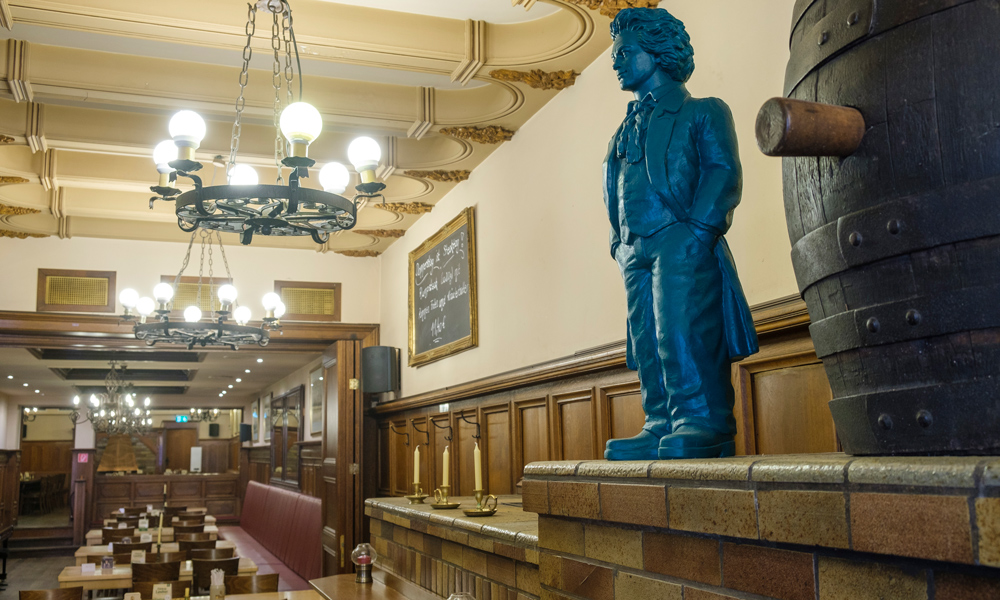 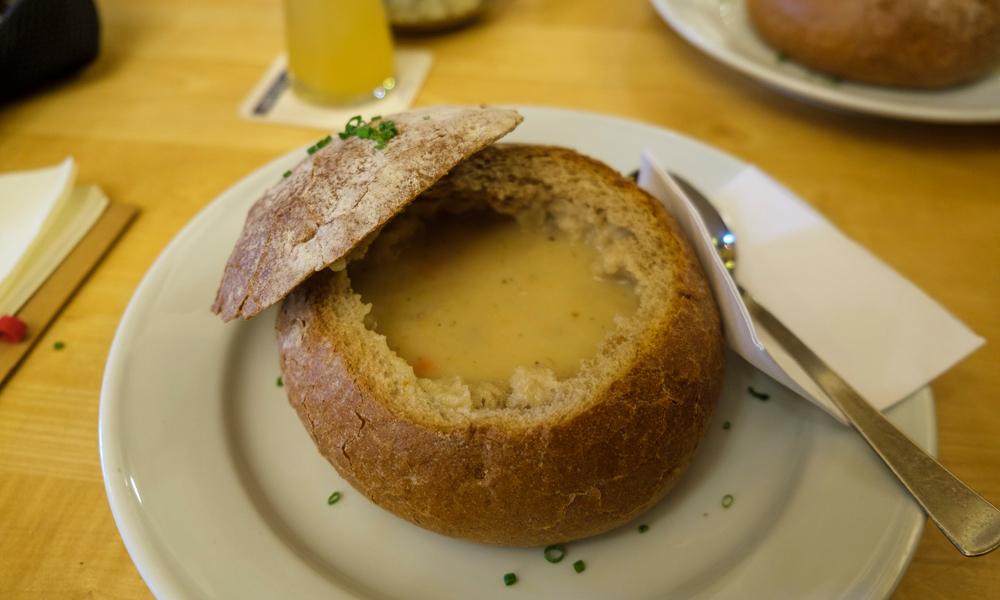 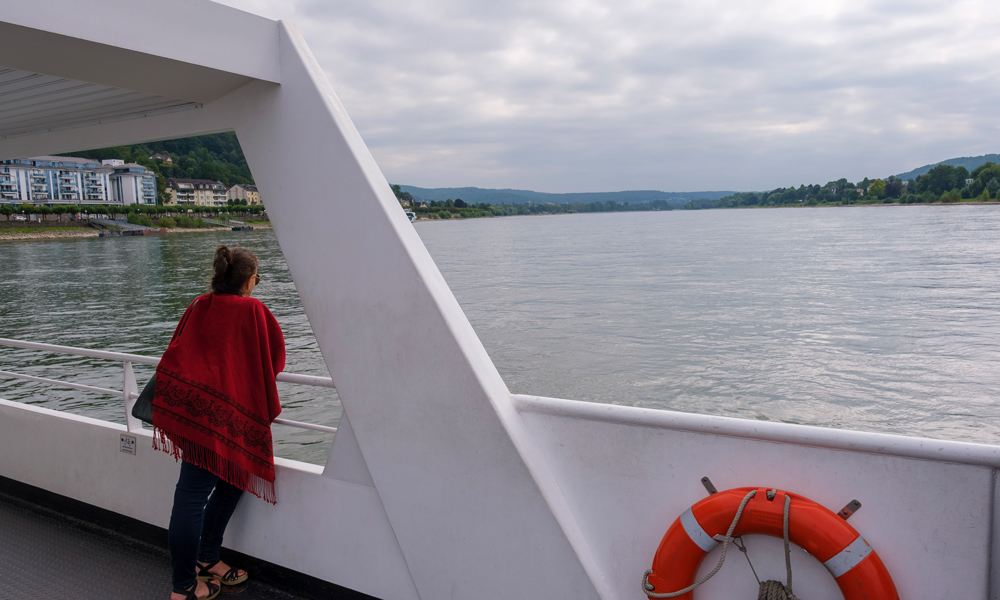 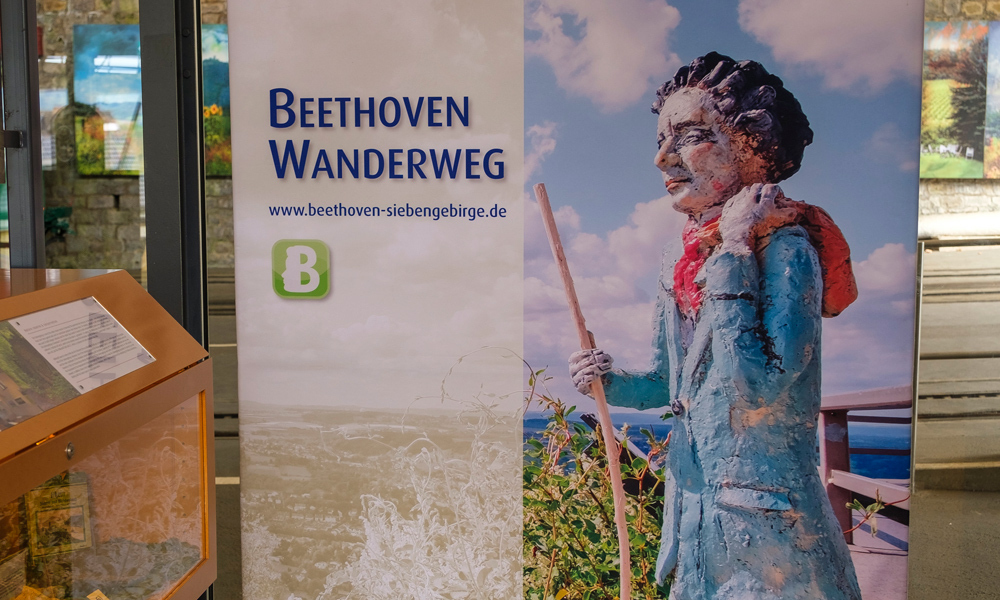 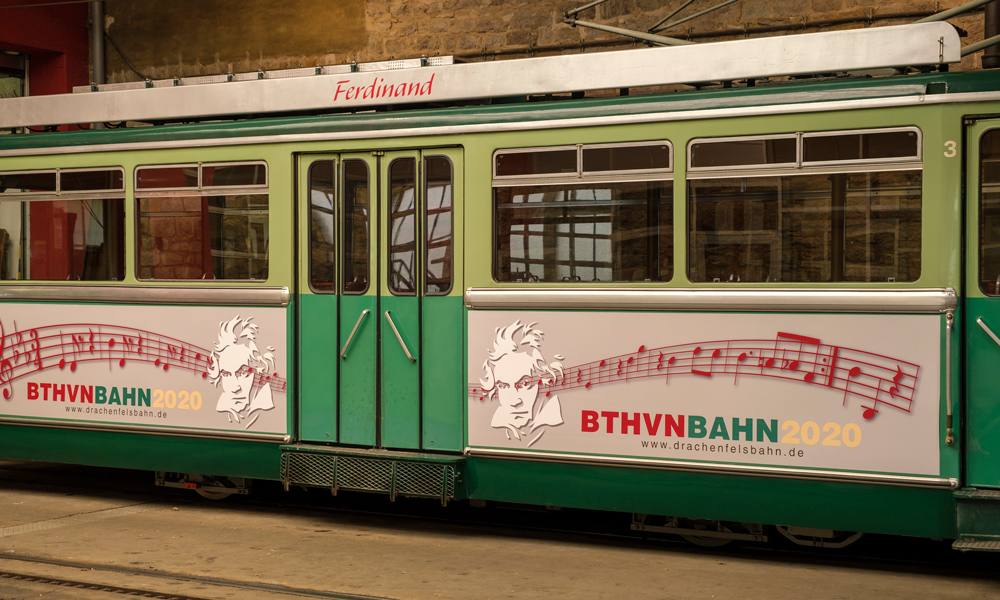 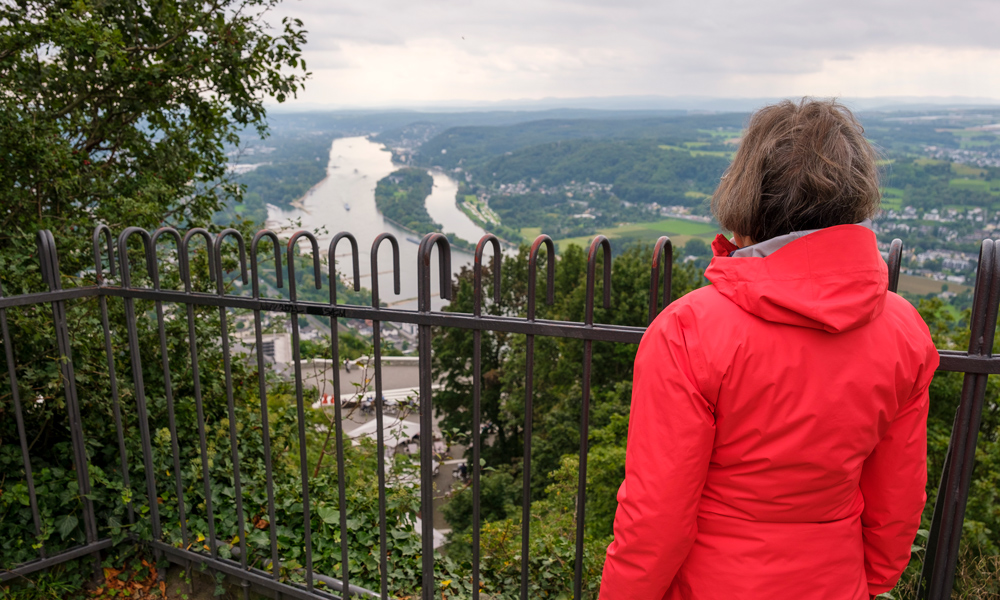 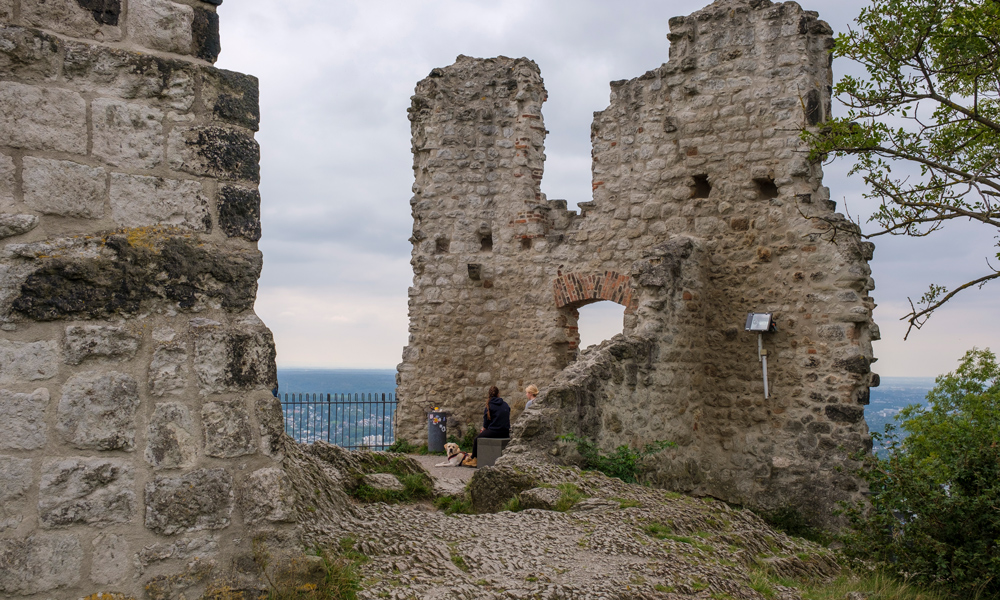 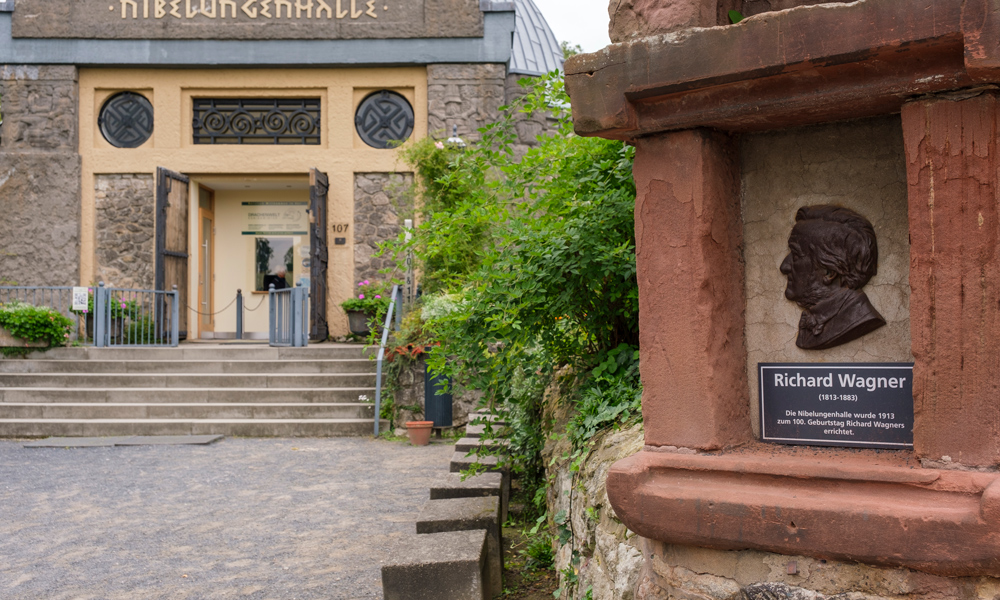 By: Willem Laros
Caravan and Caravan magazine, No. 3 June 2022

The composer who captivated the world: Ludwig van Beethoven is Bonn

Travel reports from abroad
Whoever says Ludwig van Beethoven says Bonn. Yes, also Vienna of course, but primarily Bonn. The sleepy little town on the banks of the Rhine was the capital of West Germany from 1949 to 1990, and of the whole of Germany until 1999. In addition, the city was the birthplace of one of history's greatest composers, whose works are performed all over the world to this day

The composer of the famous Fifth Symphony (ta ta ta taaa), the Ninth Symphony with its impressive final chorus (also the European anthem), the tear-jerking Mondschein Sonata, piano concertos and much more, was born in Bonn on December 16 or 17, 1770. In the house which is now part of the Beethoven Haus museum and which houses the largest collection of original manuscripts of the wayward composer.

The year 2020 should therefore be a festive Beethoven jubilee year. But a fake note threw a wrench in the cogwheels: COVID-19. But, the following year we drove to Bonn after all. You must be prepared to do something for Beethoven. Well, the date of Ludwig's birth is not quite certain. Infant mortality was high at the time, so babies were baptized as soon as possible. Possibly little Ludwig was baptized on his birthday (the 17th), but maybe he was there a day earlier anyway. But regardless, Beethoven is worth remembering with his towering position in classical music experiences.

We are advised by the representative of the state of North Rhine-Westphalia to park the caravan at the Ludwig-Erhard-Allee campsite. It costs nothing, but we conclude: There is nothing there either - apart from quite a lot of traffic noise. We therefore choose the comfort of another campsite: Genienau, just under 13 km by bike – a fantastic trip along the Rhine from the center of Bonn. The recently updated TomTom Camper GPS wants to send us down a road that is too narrow and where it is forbidden to enter. It repeats this error a few days later when we drive off, so never completely trust the navigation system. Fortunately, Google Maps on your phone provides a solution. How did we do it when we only had a map on our laps?

The campsite is separated from the Rhine and the wide Rhine bank only by a cycle path, and has no defined pitches. You can stand where there is room. Right after the entrance we see a large terrace, a bar and a wooden hut where you can order food (salads, Flammkuche, pizza). Payment can only be made in cash: the use of pin codes has not yet penetrated here. Later, in the center of Bonn, this will be a problem for us as well. At a restaurant we can only pay for our lunch in cash "because our machine does not accept foreign bank cards". Fortunately, there is an ATM across the street... Digitally, Germany is far behind in Europe, we notice again. Even the 4G connection in many places is still politely described as 'moderate'. Fortunately, the landscape, the food, the Milchkaffee, the Germans and Beethoven of course make up almost everything.

When we arrive in the center of Bonn at half past ten on a Sunday morning, and have chained our bikes to one of the many bike racks, we do not succeed in scoring one of the delicious "vases" of Milchkaffee. Only from ten o'clock onwards are we notified at three apparently "open" terraces. But at that time we have an appointment with Mrs. Becks, who will lead us for two hours through the compact center with extra attention to Beethoven. We met her right in front of the old town hall on the square. A beautiful building from the first half of the 1700th century where, nota bene, "Ludwig van Beethoven himself" welcomed us. Over the centuries, many famous guests have visited this building designed by architect Michel Leveilly. Presidents (De Gaulle, John F. Kennedy), kings and queens, emperors, politicians and world stars in music and sport.

Bonn was the seat of government of the Federal Republic of Germany (West Germany) from 1949. Theodor Heuss appeared as the first federal president on the steps of the town hall in front of the citizens of the city on 12 September 1949. After German reunification (1990), the German government and the Bundestag moved to Berlin in 1999, to the dismay of the citizens of Bonn.

In Beethoven's time, Bonn had a population of around 10.000. In his younger years, the composer traveled twice to Vienna: once to take lessons from the fourteen-year-old Mozart, -which never came to fruition as far as we know- and once to learn from Haydn. That trip was more successful.

At the Markt in Bonn there is now a photo shop. Mrs Becks: "In Beethoven's time this was a house where young people came together to talk about politics and society. It was mainly about the opposition of absolutism and freedom, with Beethoven very much on the side of freedom." He would continue to do so throughout his life. The former residence of the Elector is very evident in the center of Bonn. It is now the headquarters of the University of Bonn. 1 in 10 residents are students here. The building was constructed at the beginning of the 1700th century, became a university in 1818 and burned down completely in 1777 and 1944, after which it was rebuilt again and again. Becks: "The Allies wanted to test a new type of bomb in 1944: Bonn was chosen for this. This cost the lives of 1500 inhabitants".

Most beautiful in Germany

The Münsterbasilika is one of the three places in Bonn where the young Beethoven demonstrated his skills on the organ. This church is one of the most beautiful buildings in Germany along the Rhine, where the transition from Romanticism to Gothic construction is visible. The origins of the church - 3rd century AD - can be traced back to a Christian monument of two Roman officers: Cassius and Florentius. These are still revered as protectors of the city. The beautiful Stations of the Cross from the 1100th century are the only one of their kind in the Alps. In the 1300th century, two kings were crowned in this five-towered building.

The Beethoven monument on Münsterplatz was unveiled in 1845, eighteen years after his death. The financing is a special story. Fellow composer Frans Liszt, an admirer of Beethoven, not only donated 10 francs, but also gave concerts everywhere, the proceeds of which went towards the creation of this magnificent statue. In 000 the first Beethoven Festival also took place in Bonn, it is still organized annually to this day (August/September).

on the outskirts of the inner city, the Alter Friedhof has been located since 1715, once laid out for "ordinary residents, passers-by and soldiers". Later in this century it became the most important cemetery, where Beethoven's mother and Robert and Clara Schumann, among others, are buried.

We end the tour in Bonn, of course, in the Beethoven house, where the baby Ludwig was born in 1770. This building has been a museum since 1893. But it is - it receives more than 100 visitors a year - also more. Under this roof is the largest Beethoven archive in the world. Some of the original manuscripts, which are constantly changing due to their fragility, are also on display for the public, as are instruments and the famous "horns" with which the increasingly deaf Beethoven tried to understand his surroundings.

Gasthaus im Stiefel is located almost directly next to the Beethoven house, where we naturally order the Beethoven Laiberl. It is a Rheinische potato soup with slices of sausage and bacon, served in a hollowed round bread. So you eat soup and "pan" on it! This dish in particular is what Beethoven's father would eat here - if he were as sober. Even if none of this is true, the soup is delicious. (But pay in cash.) After the Beethoven lunch, we take another city tour in an open double-decker. This around two-hour long tour takes us past all the important places in Bonn. Pieces from various Beethoven symphonies sound from the loudspeakers between the explanations. Towards the end of the trip, the driver overlooks a parked electric scooter, the handlebar punches a hole in the side wall of the bus. Fortunately, no one was injured.

When I see a real Beethoven vehicle at the station of the Drachenfelsbahn, I change my tour plans: we're going up with Beethoven in the funicular! On the way to the top, the small train rises around 220 meters to 321 meters, with inclines of more than 20 percent. The cogwheel train was built as early as 1883 - "but regularly modernised," an explanation on the site reassuringly adds. At the very top is the ruin of the former Drachenfels Castle, built in the 1100th century to defend Cologne and Bonn. During the Thirty Years' War (1618-1648), Swedish soldiers destroyed the castle. From this spot you have a fantastic view of the Rhine and we can even see the campsites Genienau and Siebengebirgsblick.

We decide to go down. This takes us past the Nibelungenhalle, a late Art Nouveau dome built in 1913. It commemorates the 100th birthday of Richard Wagner. Inside, twelve large paintings by Hermann Hendrich are on display. The paintings tell the stories of the "Ring of the Nibelungen". These are Wagner's four operas Rheingold, Walküre, Siegfried and Götterdämmerung. In 1933, the 50th year after Richard Wagner's death, the Drachenhöhle was opened. Here, a thirteen meter long stone dragon can be seen at the edge of a small lake. The beast is completely overgrown with moss.

Two days with Beethoven is not nearly enough to see everything. In our motorhome these days we only listen to Beethoven. Travel and music: what a great combination it is! We hope to combine a trip with Anton Bruckner and Johannes Brahms this year.

With thanks to Tourismus NRW (the state of North Rhine-Westphalia and the tourist organization Bonn).