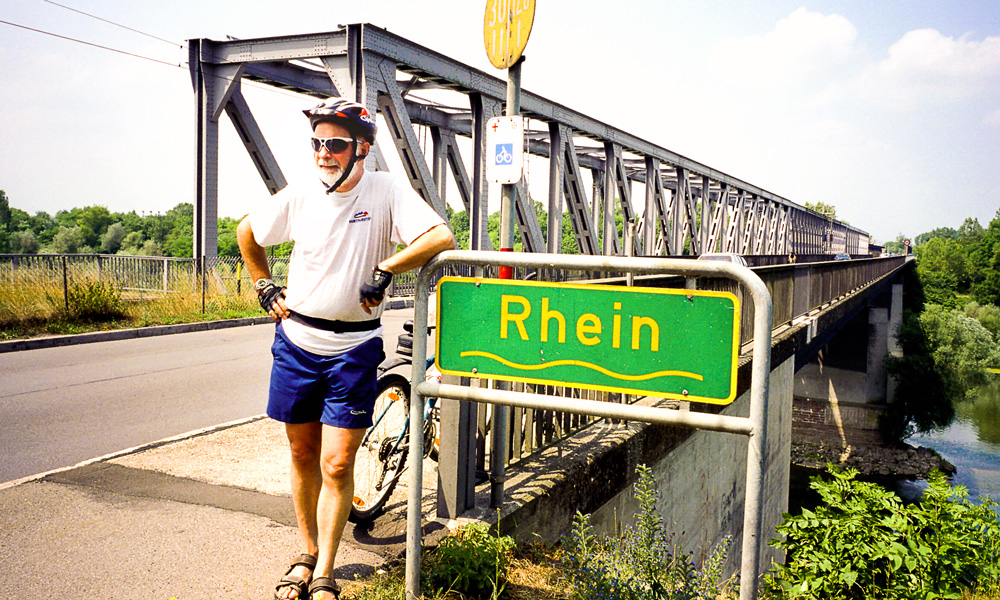 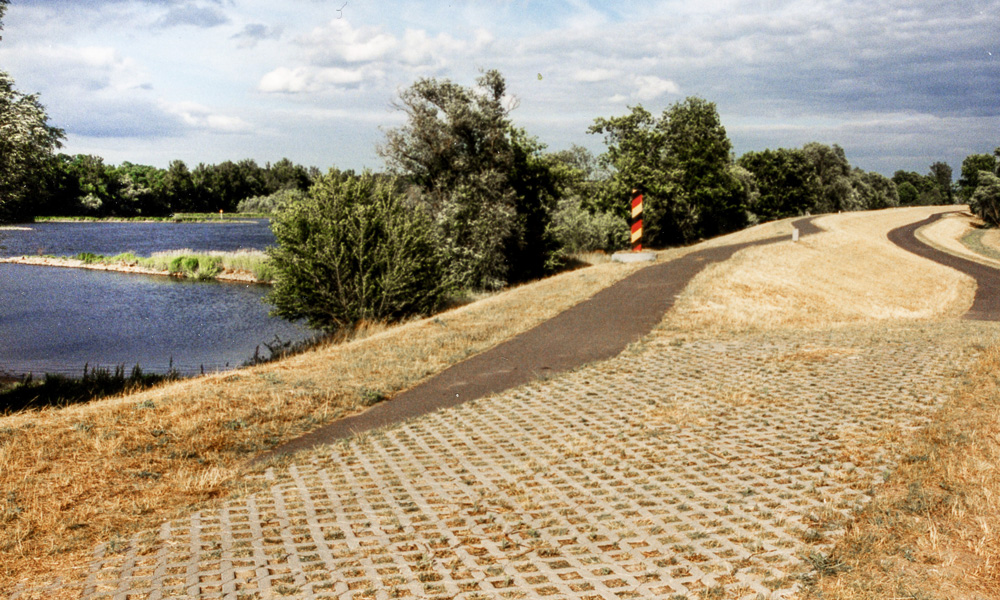 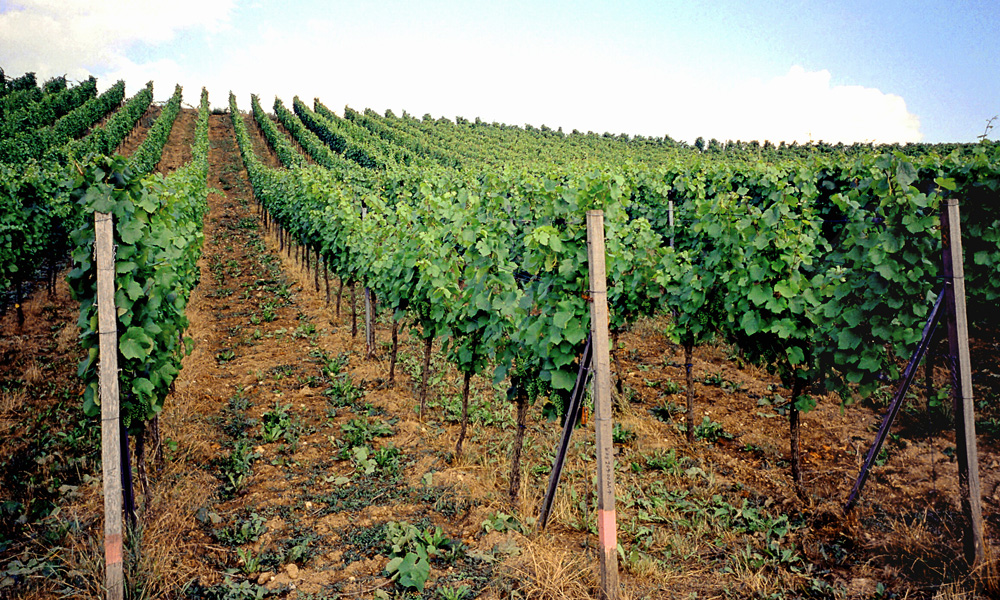 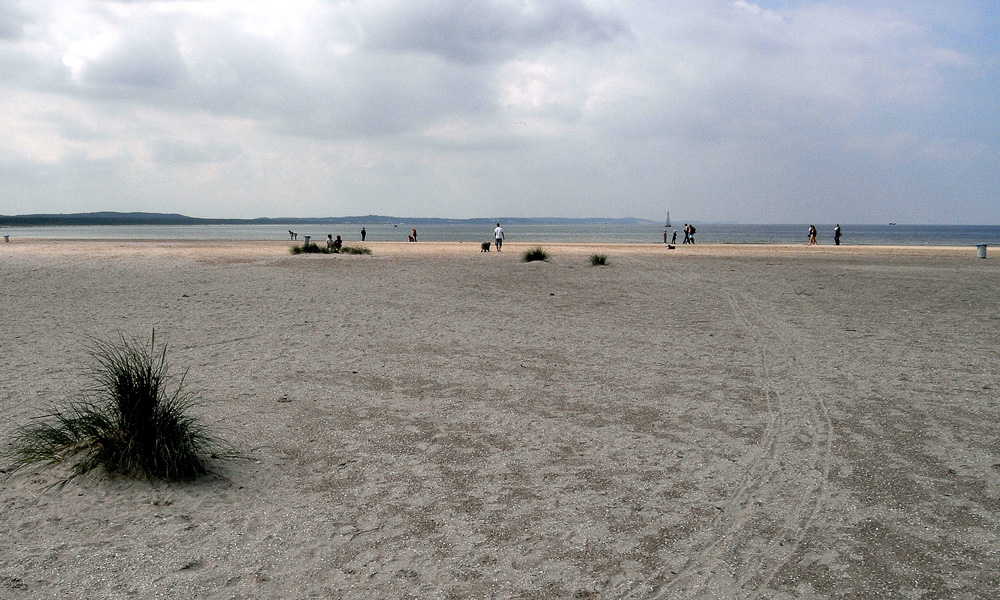 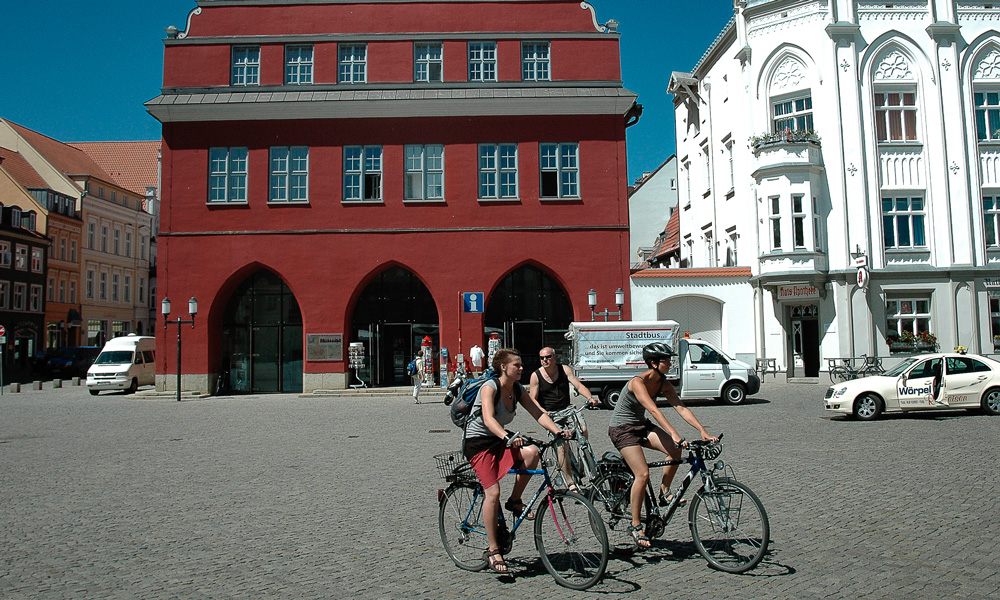 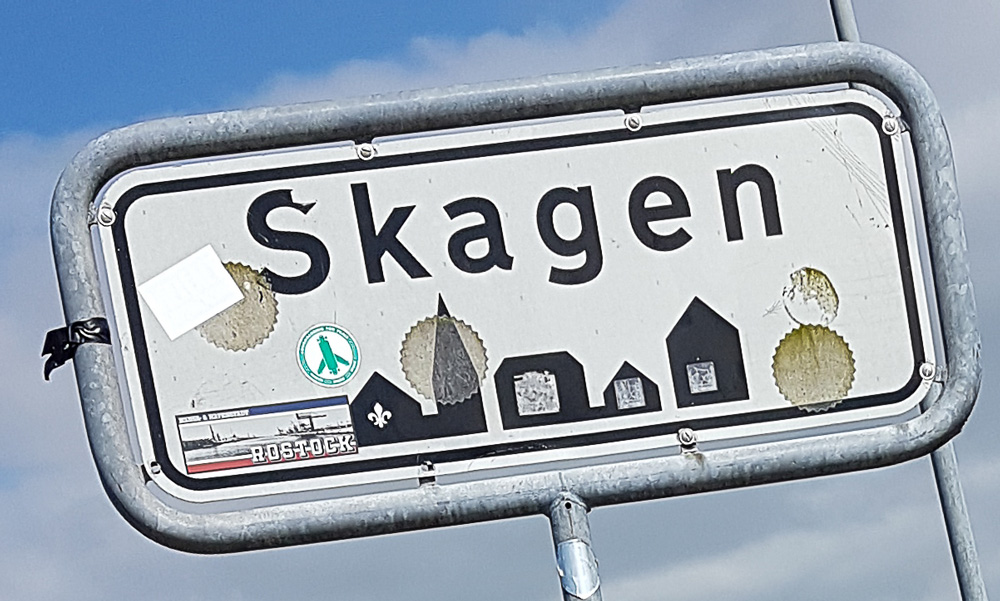 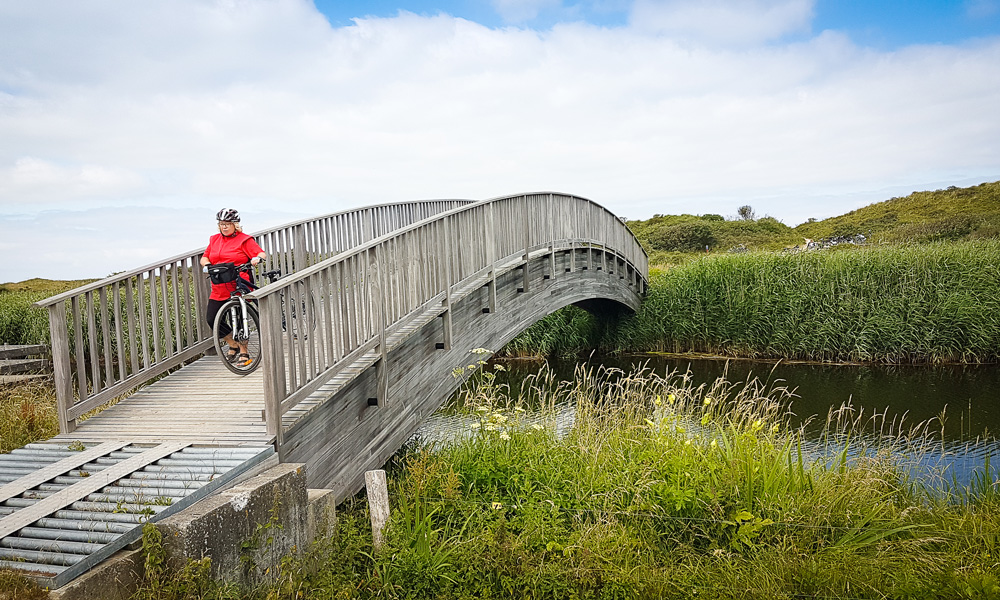 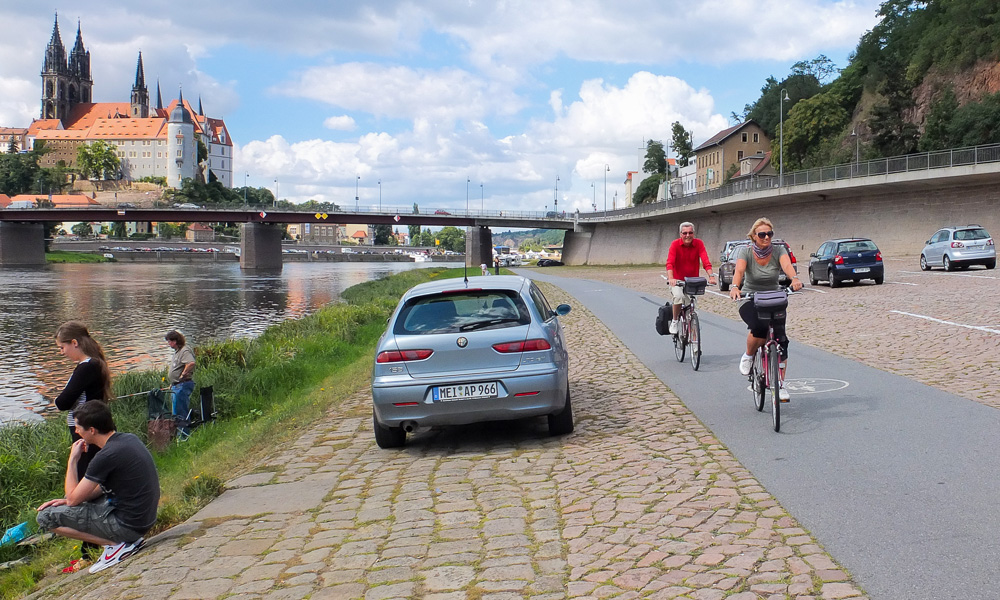 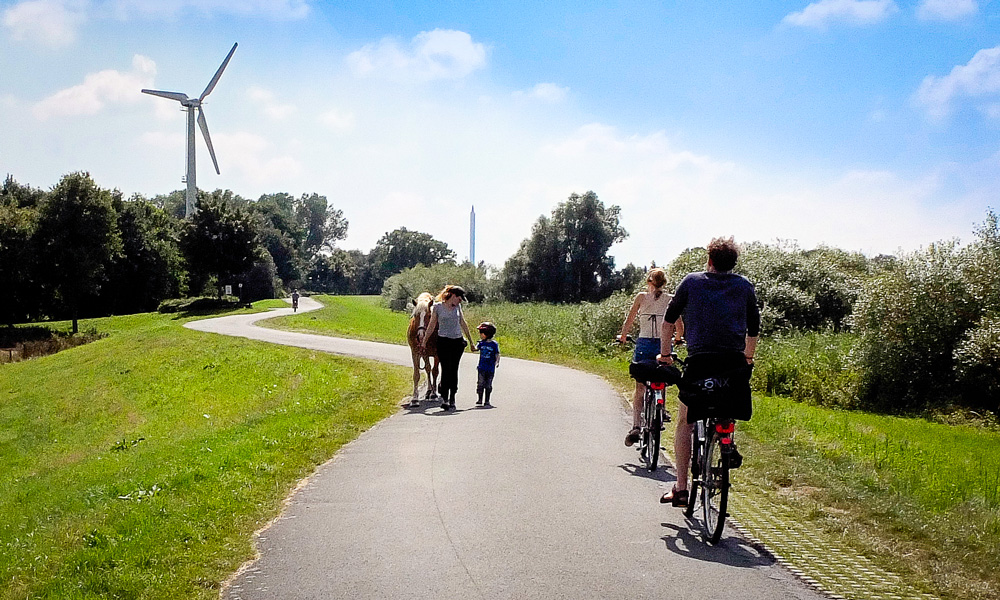 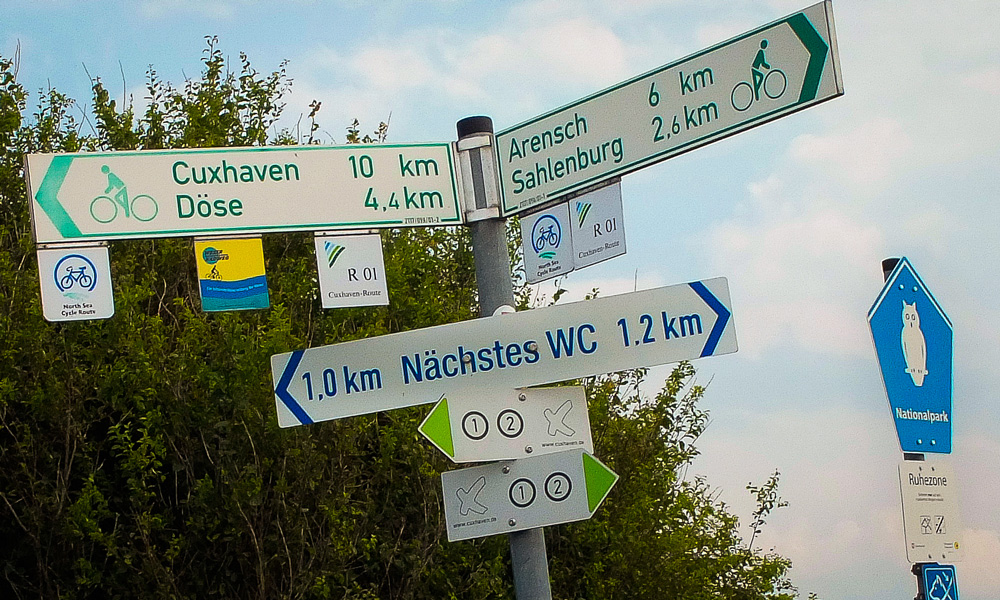 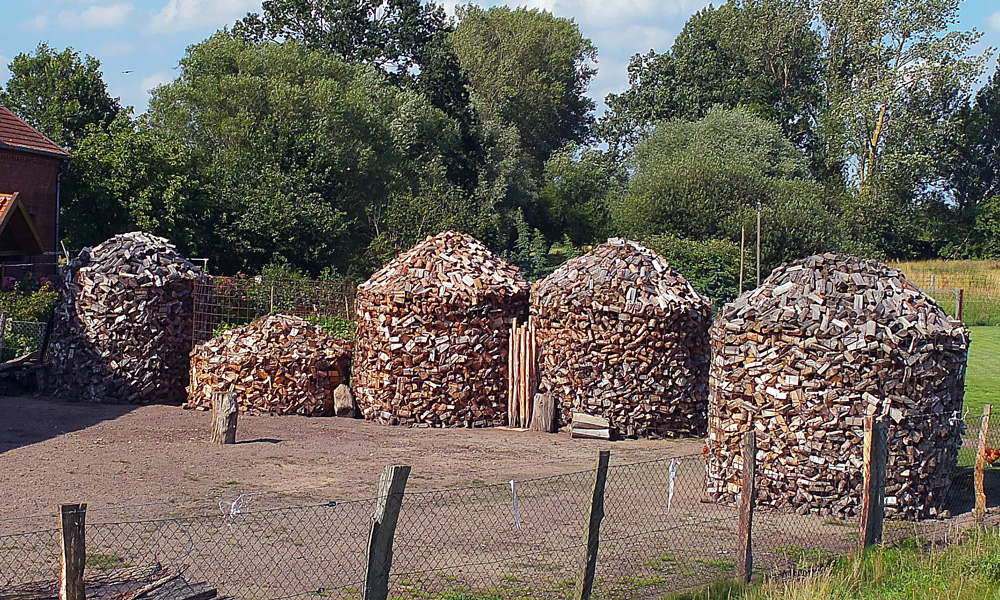 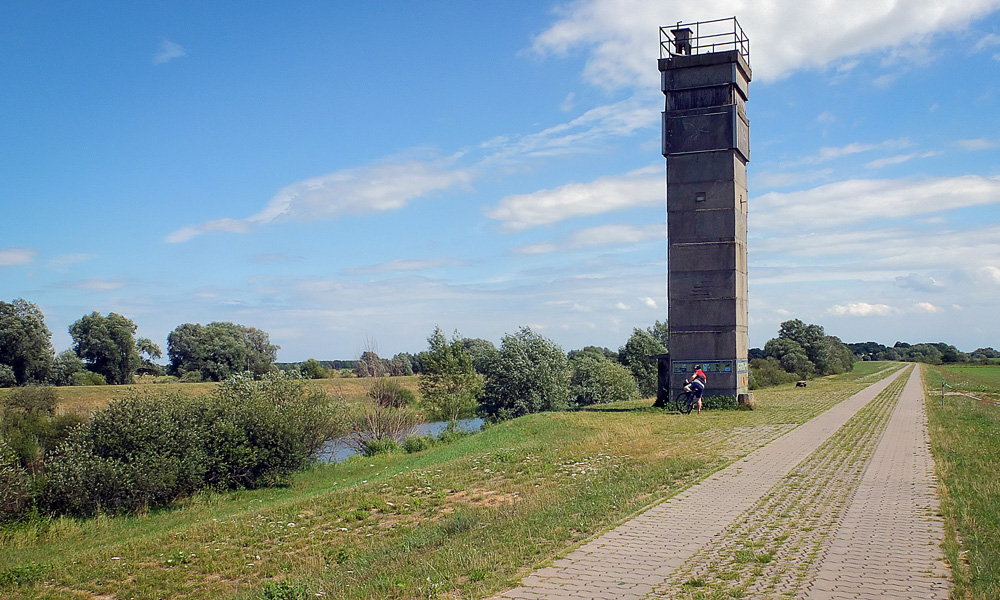 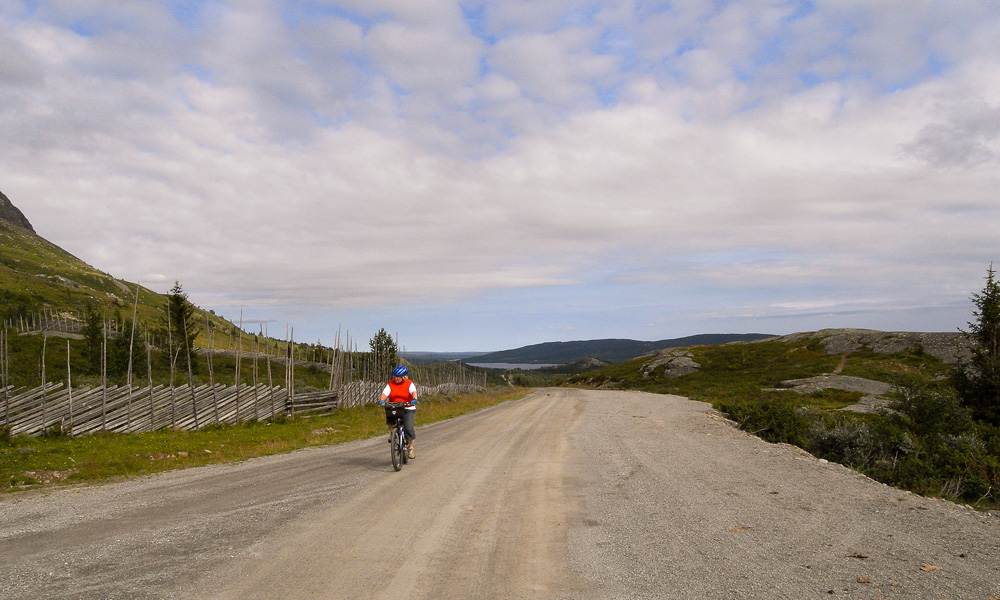 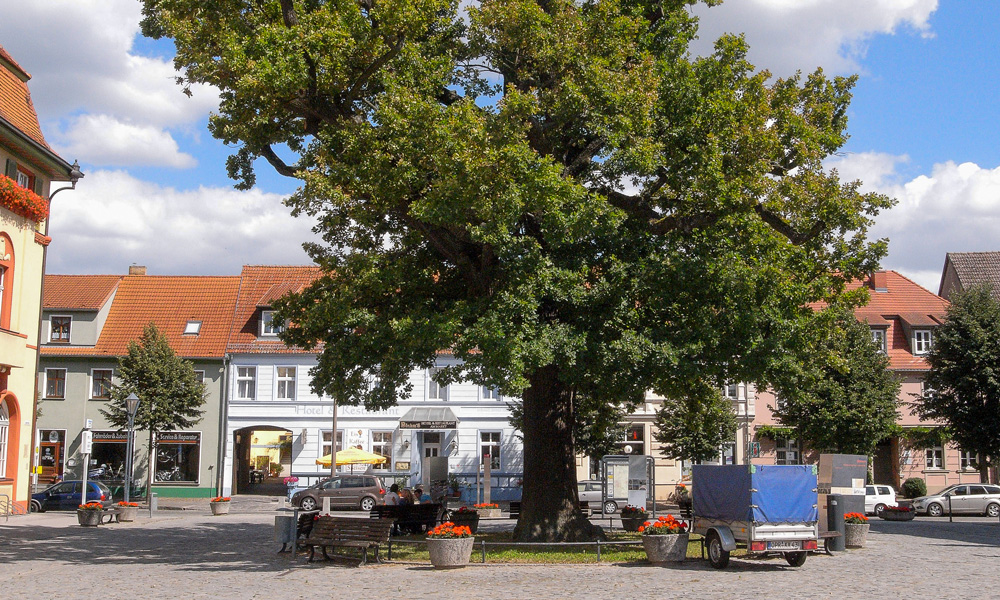 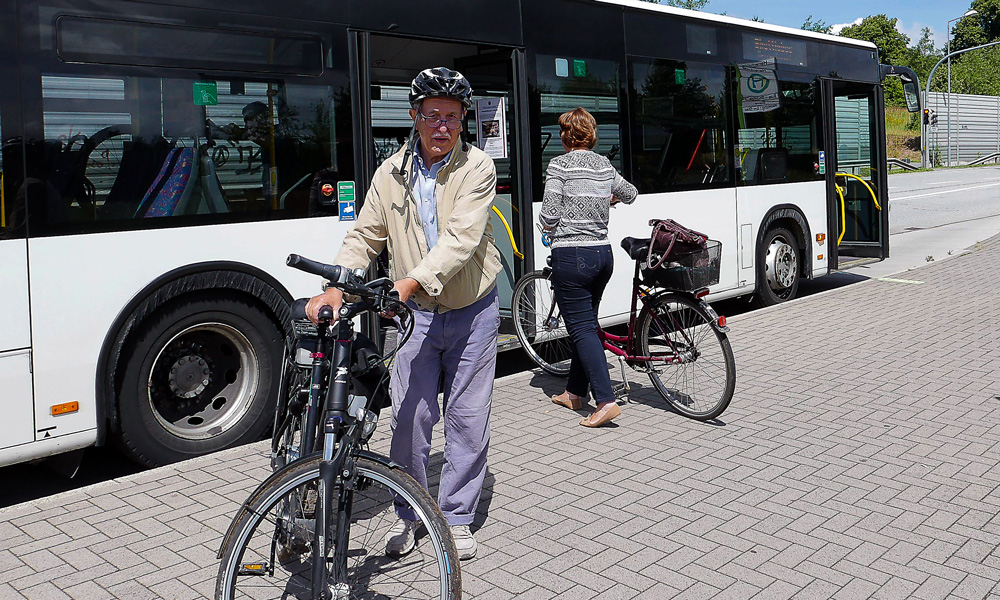 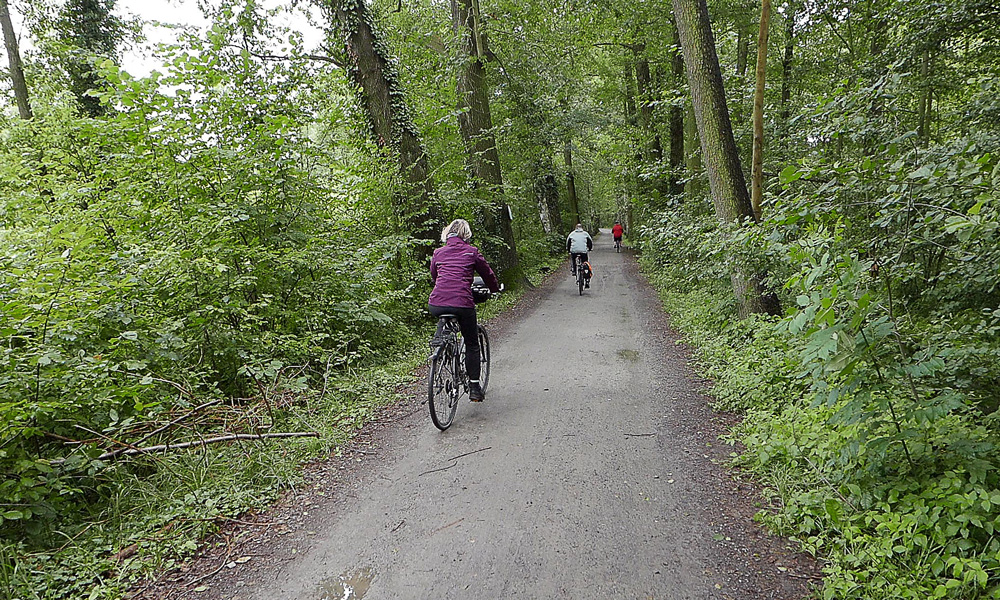 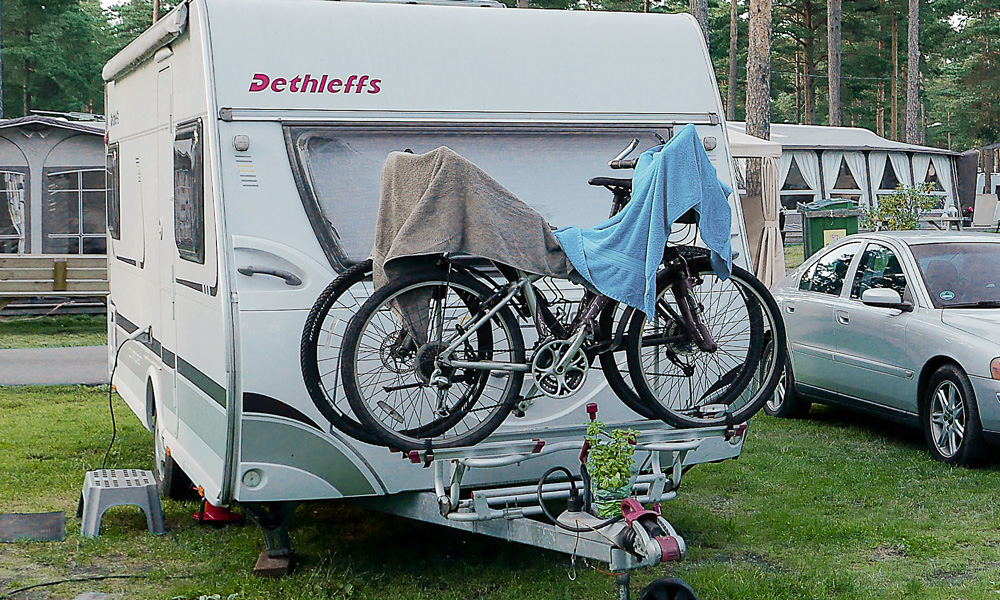 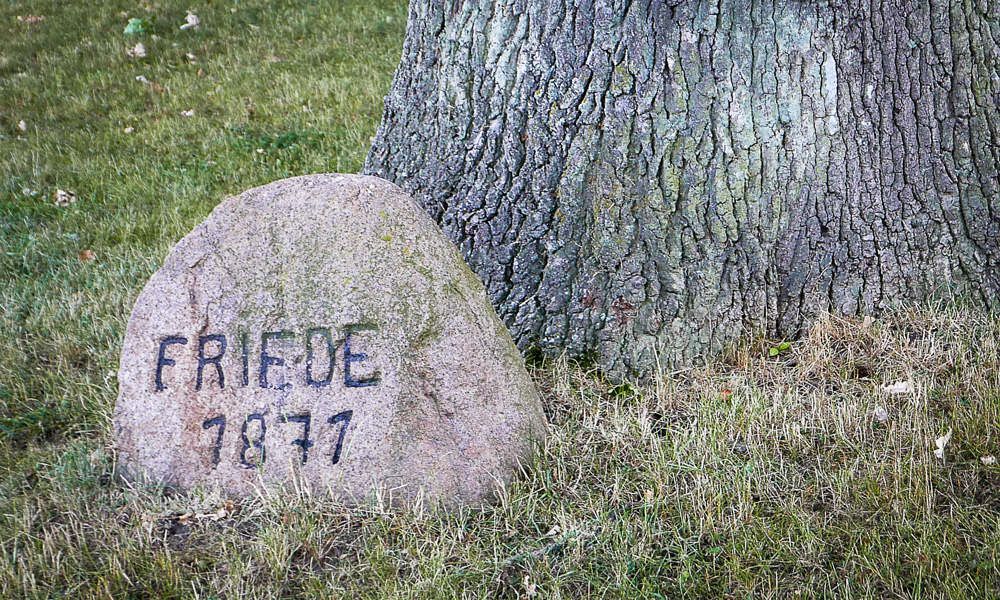 Bicycle does the trick at camping

Travel reports from abroad
The bike is the camping people's best friend, second only to the dog, and the bike is a docile hiking friend who is happy when it gets enough air in the tires, well-oiled chain and solid lock.

Many have guided our travel plans through a wandering camping life and the bike has kept up. Our "holiday thing" is to cross as many borders as possible on two wheels. Therefore we camped in German Aachen with a short way to Belgium and the Netherlands. We climbed per. bicycle Netherlands' highest «peak» - Vaalserberg (322,7 masl). 27 gears did the trick. Marking historical events, films, TV series - or books that inspired our first groundbreaking bike ride.

The German author Siegfried Lenz wrote the books Tysktime and Forhistorien. German class is based on the painter Emil Nolde who was banned from painting during the Nazi era. The policeman who was to monitor the ban, stepped dutifully with a fluttering raincoat upwind and headwind to the painter's studio. Hooked on the book, we wanted to follow in his footsteps, and camped in idyllic Tønder close to the border. We rolled into Schleswig-Holstein to Nolde's home which is now a museum surrounded by a sumptuous garden. The combination of bicycle and camping is to tread sweat on the mountain roads in Hemsedal, or to roll into Sommer-Arendal and always find parking. We have discovered that the ferry town Hirtshals has an untouched and different surroundings. Sustainable and environmentally friendly, on gravel roads and asphalt, through small forests and marshes, we stepped to the mythical Skagen. Famous Norwegian artists went there with easels and paintings in their luggage. The creative souls attached both the light and summer-clad women to their canvas. We took a selfie.

The dilemma of crossing borders on two wheels can perhaps be explained by the impenetrable Iron Curtain which in our most rebellious years divided the continent in more ways than one. There was a journalist in my passport, and then it was almost hopeless to get behind the rug as a tourist without an invitation. I was never invited. When the rug was torn down more than 30 years ago, curiosity had grown to the point of cracking. This resulted in occasionally complicated planning during the winter months. The number of kilometers from the campsite to the nearest border crossing often determined where we camped. We cycled on bumpy concrete slabs along the Oder-Neisse line, the border between the reunited Germany and Poland. The cyclist ate his slices of bread in the middle of European history - without invitation.

You never cycle alone on the cycle paths along Europe's mighty rivers. The camping tourist - the day tourist on two wheels, sneaks into the line of long-distance cyclists with stiff bicycle bags both in front and behind. We walked mile after mile with and against the maelstrom on Elbradweg, crossed the river with shuttle ferries until we reached the border post towards the Czech Republic. The kiosk offered us Czech beer and cooling shade. The bike rides in the resort's local environment take you into world history.

Germany and France have not always embraced each other as best friends Merkel and Macron do today. The Alsace-Lorraine border area has changed both ownership and name, depending on the balance of power and the success of the war. Today, the camping cyclist cruises along vines on ledges, upwards and upwards. We cross the border and the Rhine, and sweep past small French towns with German-sounding names. This is how we ended up - wearing gaudy and sedentary cycling suits, at a gourmet restaurant in a French town so small that it is not found in Michelin's road atlas.

The trout in the forest

When the bike map is folded over the camping table, we know that the unexpected awaits out there. Off the beaten track we found a fish restaurant in the middle of the thickest oak forest in Brandenburg. The trout was carried in a house from a fish farm almost 100 meters from our table. Local food. In 1945, Allied armored divisions bombed their way through the same forests en route to Berlin. History is never boring. The bike softens stiff backs and stiff thighs after long driving sessions on the road. The two-wheeler saves the breakfast rolls that must be picked up at the bakery three kilometers away from the campsite. In this way, the cycling camping tourist discovers that many towns and villages have enriched their environment with beautiful art, or monuments to events that will never be forgotten.

In the age of Google, we quickly check the facts about the artist who created the sculptures and the prehistory of the monuments. The bike makes you a discoverer who finds endless sandy beaches along the Baltic Sea, some stills of people, others without a human within sight. You scroll through villages with names you can barely pronounce due to the lack of vocals, take selfies in front of citizens and small people's gardens populated by garden gnomes.

In a German town we had never heard of, we sought shade under the village oak in the middle of the square. We congratulated Eika on her 200th birthday. The tree was planted on May 17, 1814. Camping tourists often have to be their own guide. The excavation work in Kyritz revealed that the jubilant oak had its roots in a town that had been Hansestadt and a member of the powerful Hanseatic League, which also traded with Bergen. So maybe the oak was planted as a thank you for the trade on Tyskebryggen.

In another city, the cyclist's gaze caught a gray stone that marked peace between Germany and France in 1871, when everyone hoped that the great wars were now over. That's not how it went. Cycling is heavily marketed everywhere in the environmental age, and in the tourist brochures everyone rides in tailwinds and sun. Rjukan irresistibly invited to cycling on Norway's roof with a view to Gaustatoppen. We westerners have enough mountains to admire, but Gaustatoppen is shrouded in a national aura. The photo motif popped up before our inner eye, a bicycle in the foreground with a snow-capped peak against the blue Telemark sky. The crossroads lifted people and cycled up into the mountains. We got the picture, ate the bananas, bunkered fresh water and praised the mountain bike's damping fork.

We who went to nursery school had to, in addition to hymn verses, also mourn Europe's mighty rivers. Curly blue stripes. Weser, Rhine, Danube, Elbe, Seine, Rhone. The tagged blue stripes were the continent's channels in JW Cappelen's school atlas. Little did the weary schoolboy know that the canals would be his holiday pasture. We westerners are not spoiled by bike paths in flat slopes, and the paths along the canals are both long and flat. It seeps into the reeds when several thousand colorful containers pass you on the port side as we say on the blue country road, the continent's arteries. The steel boxes on deck can contain clothes, mobile phones, machines, refrigerators, electric bicycles or televisions. Rich Europe is insatiable.

Train and bicycle are a great combination. We have gained our experience in Denmark and Germany. Good local maps online or on paper will provide information on both train lines and cycle paths. We often make circular trails where tired thighs and legs can choose the train home. If you have a base camp at the popular Lübeck and want to visit the witch's cauldron Travemünde, there is a separate bicycle bus under the river Trave. And the miles home can be considerably shortened by local trains from the seaside resort to the marzipan town. Remember enough patchwork, locks and helmets!