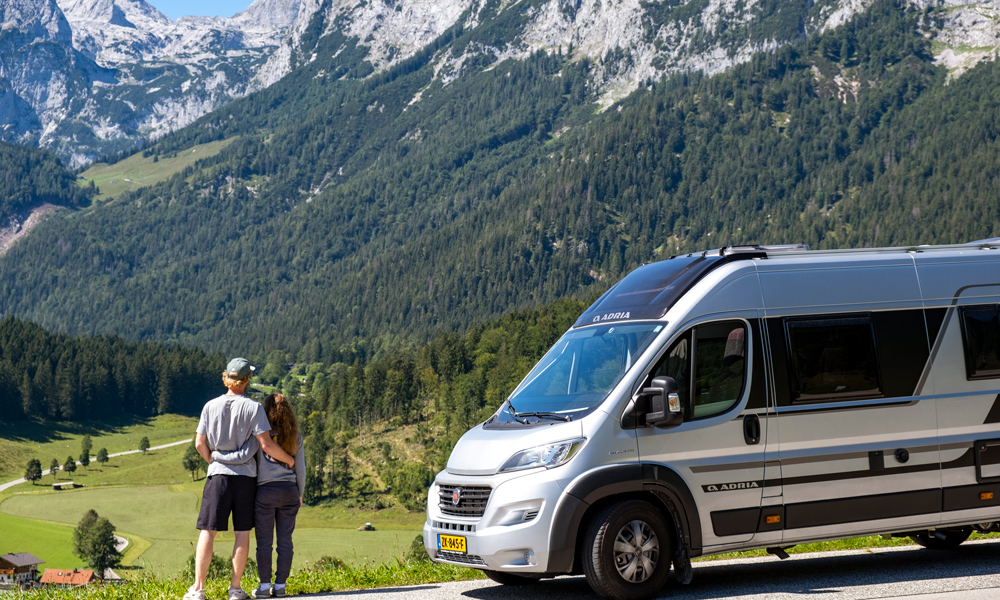 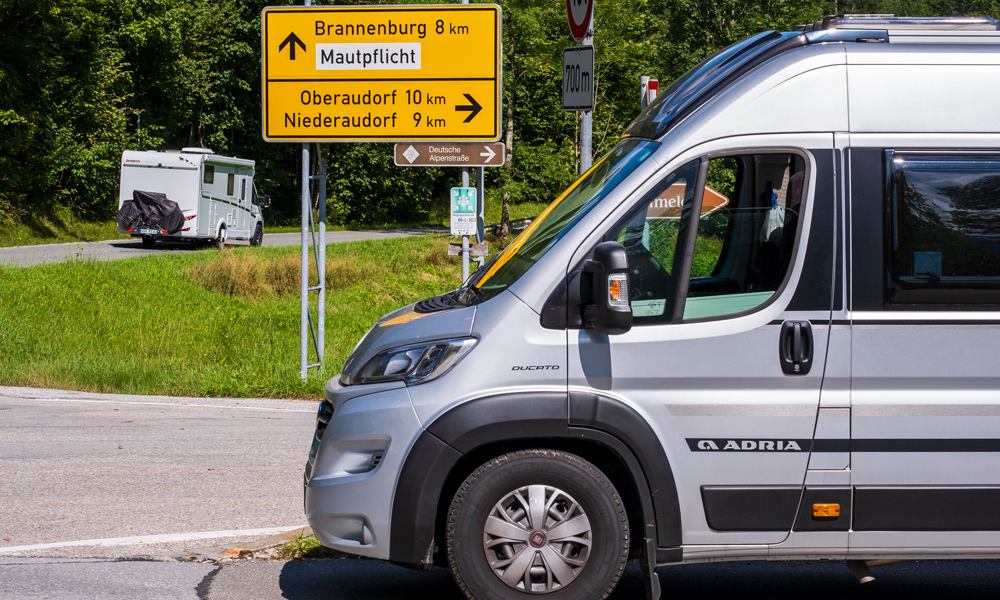 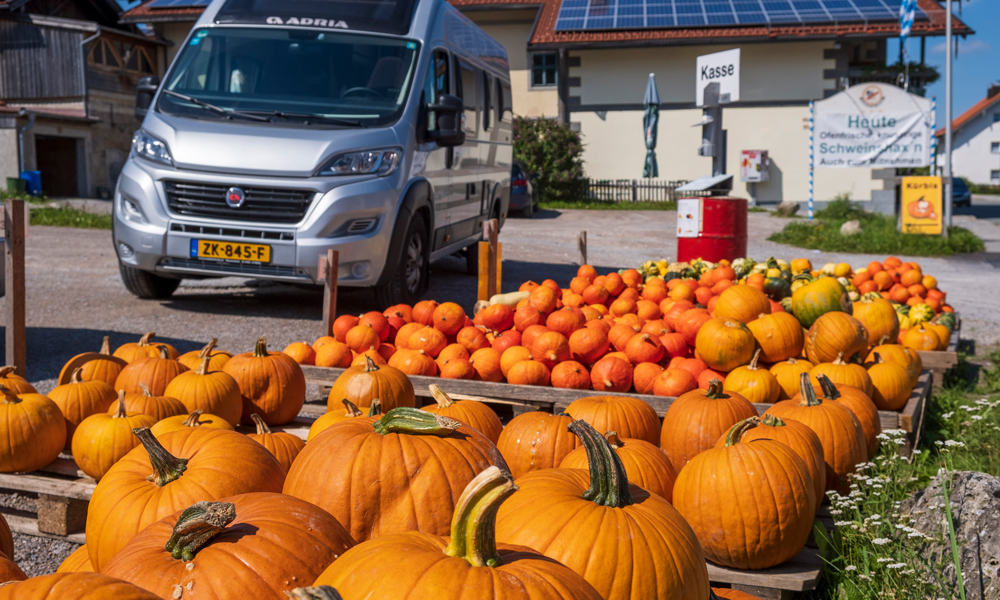 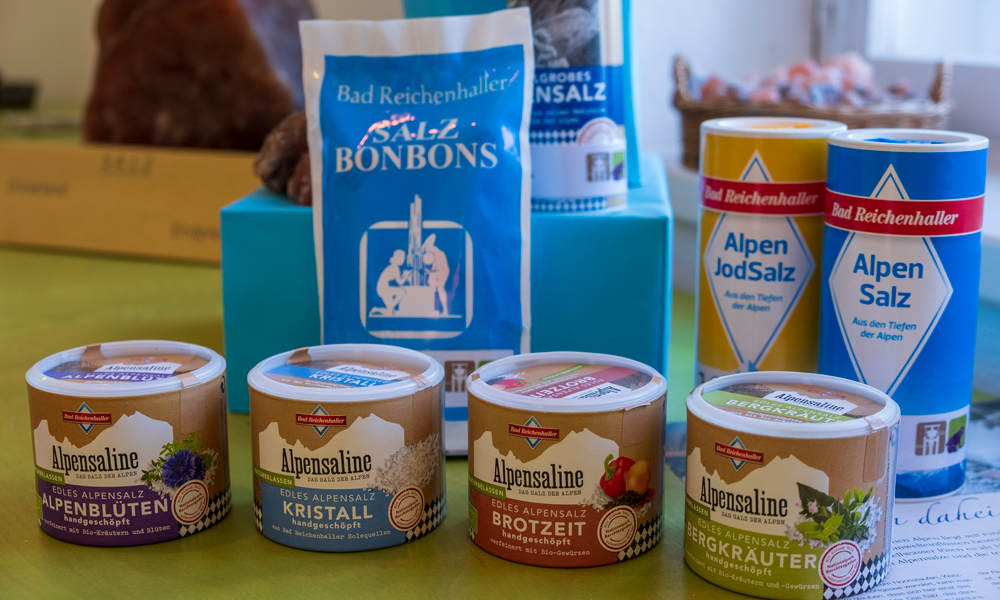 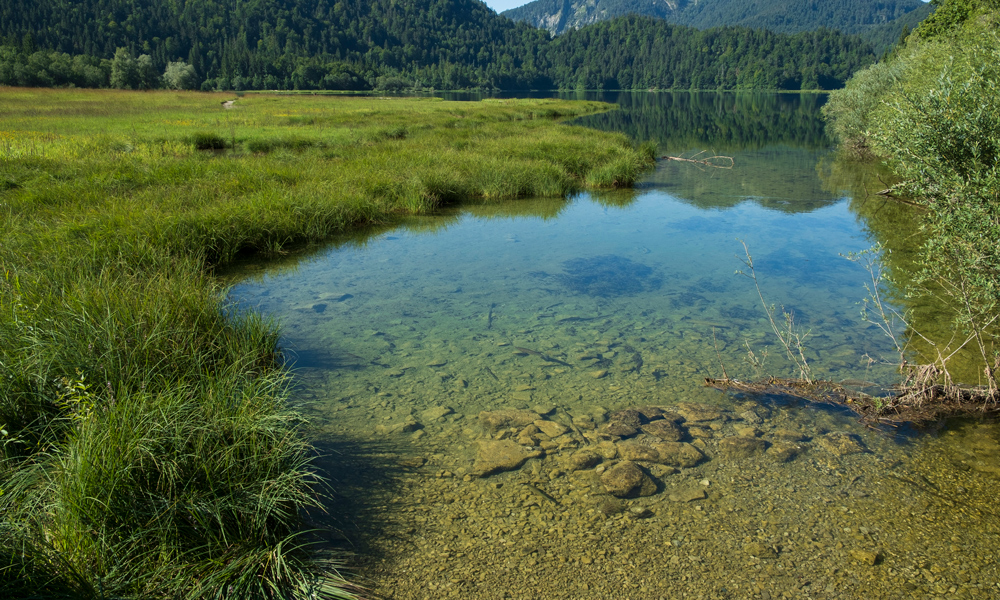 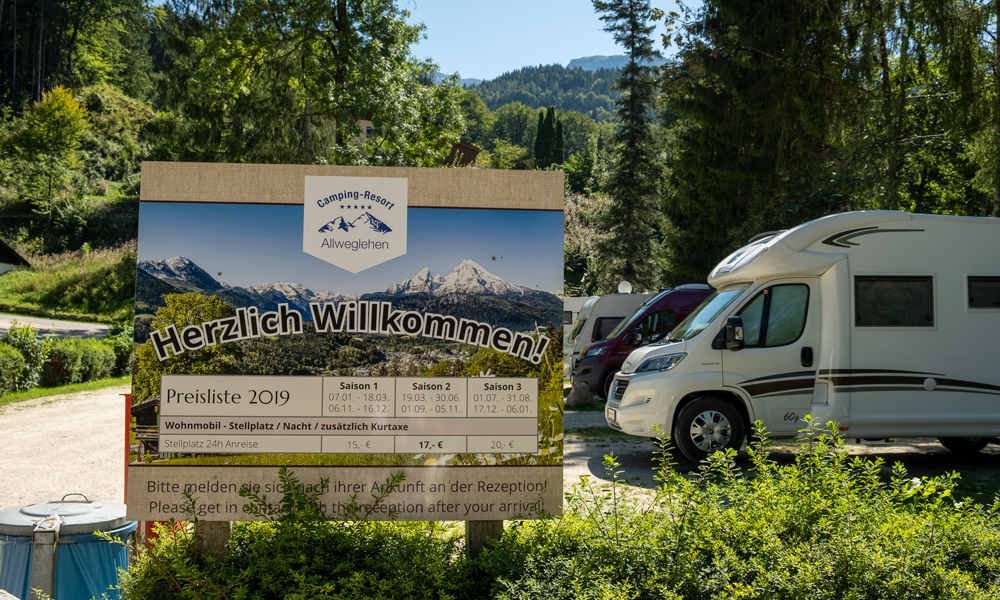 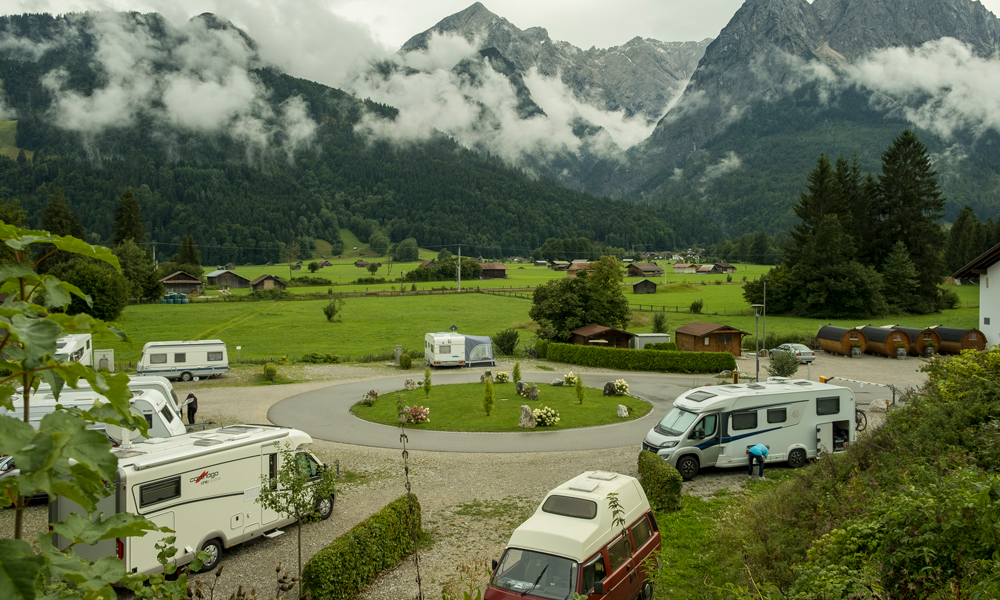 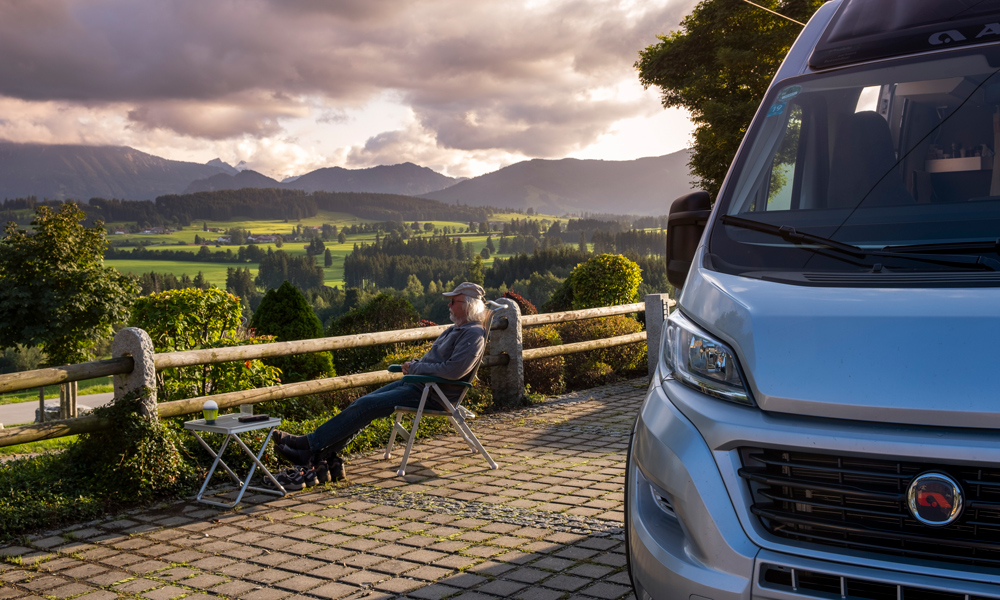 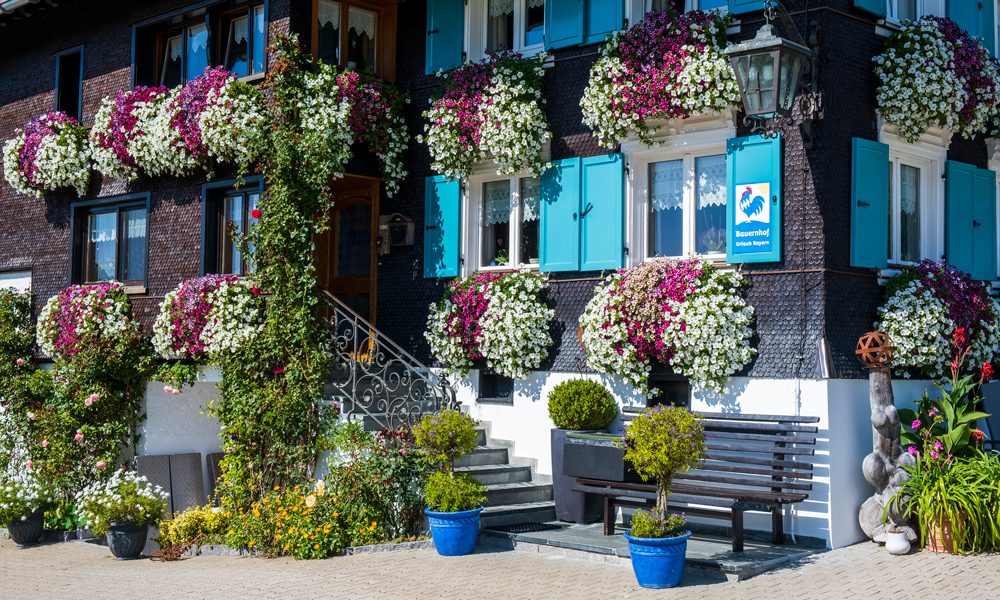 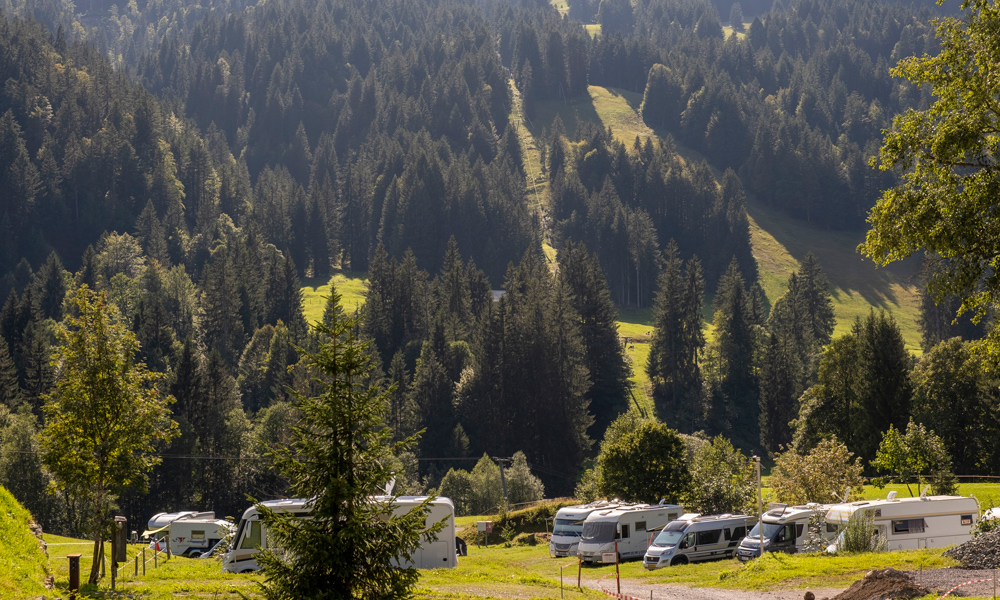 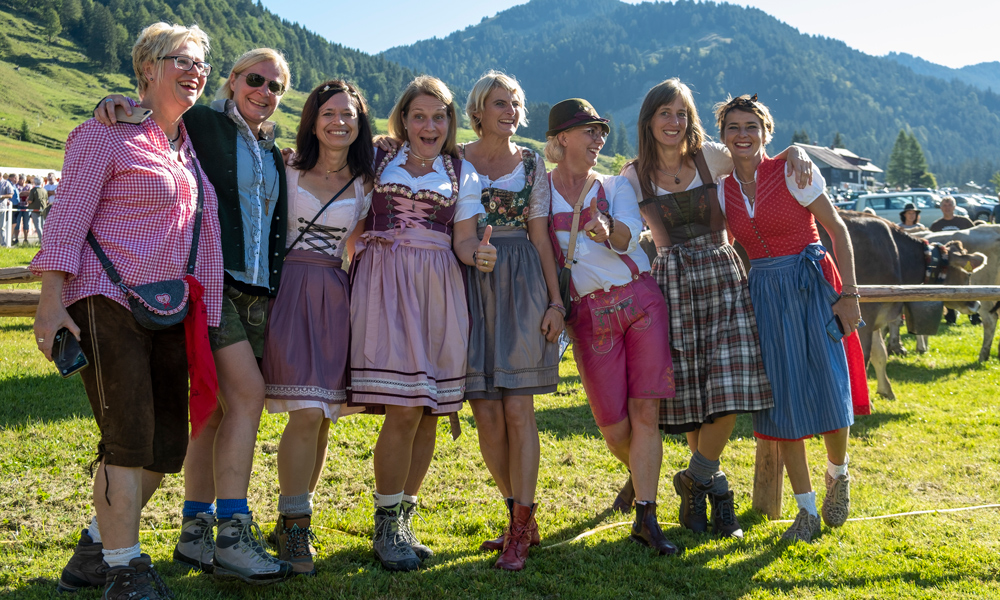 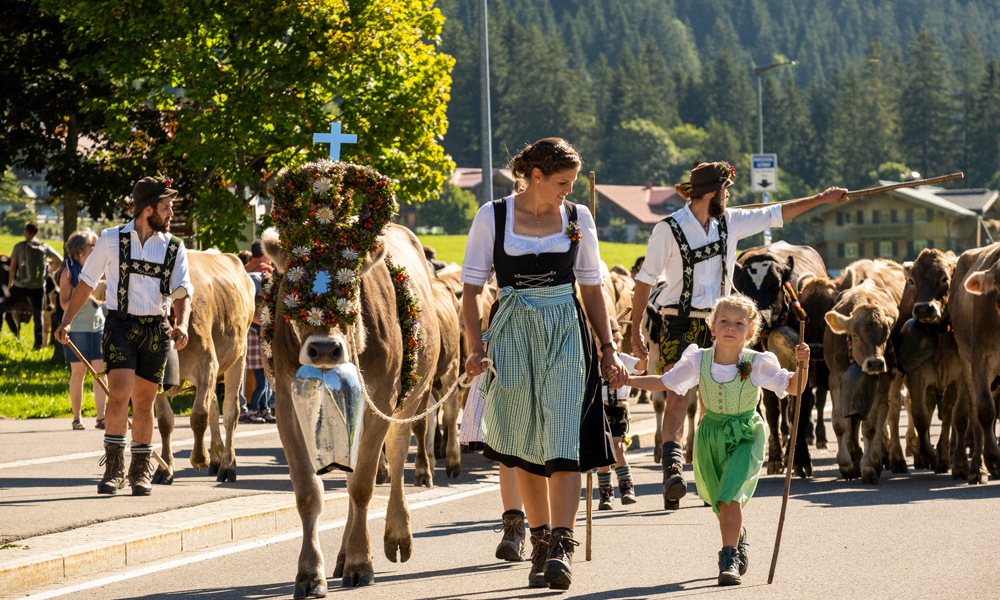 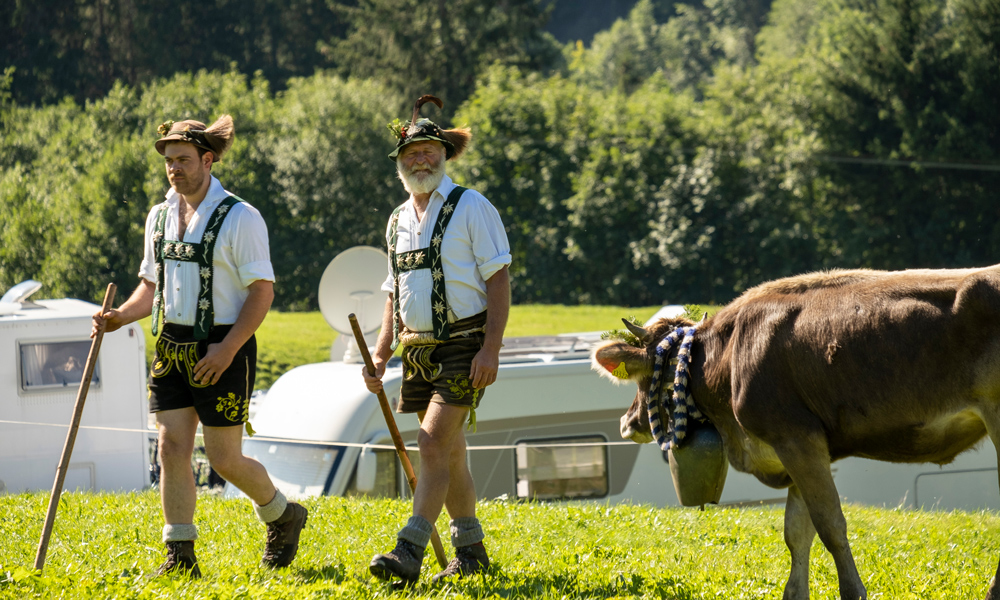 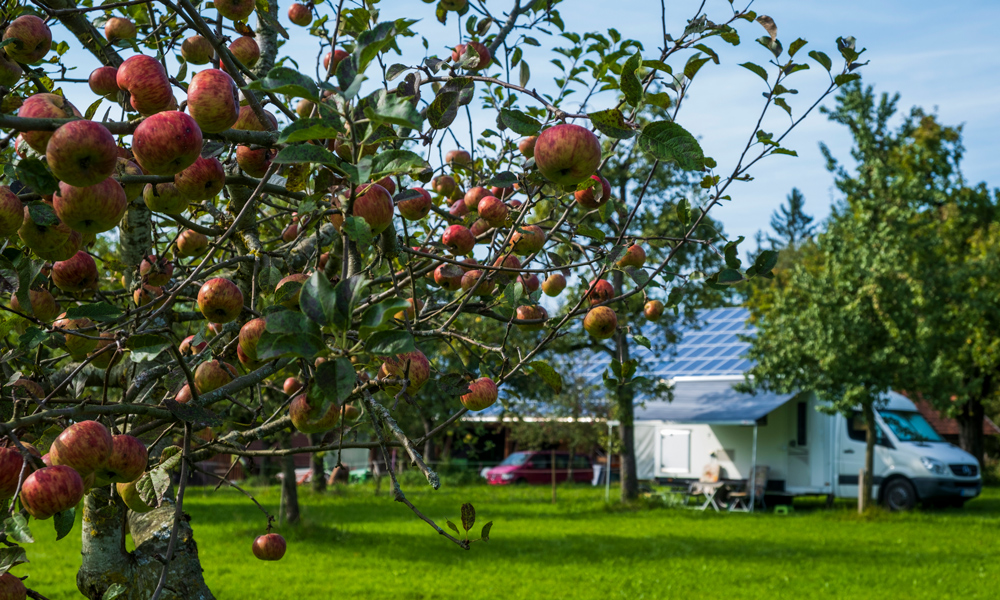 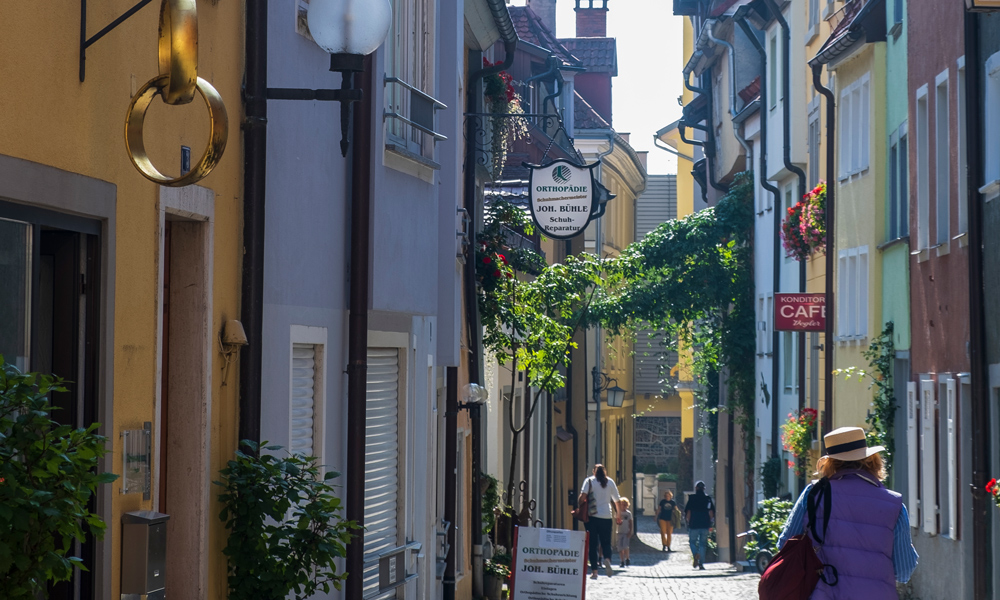 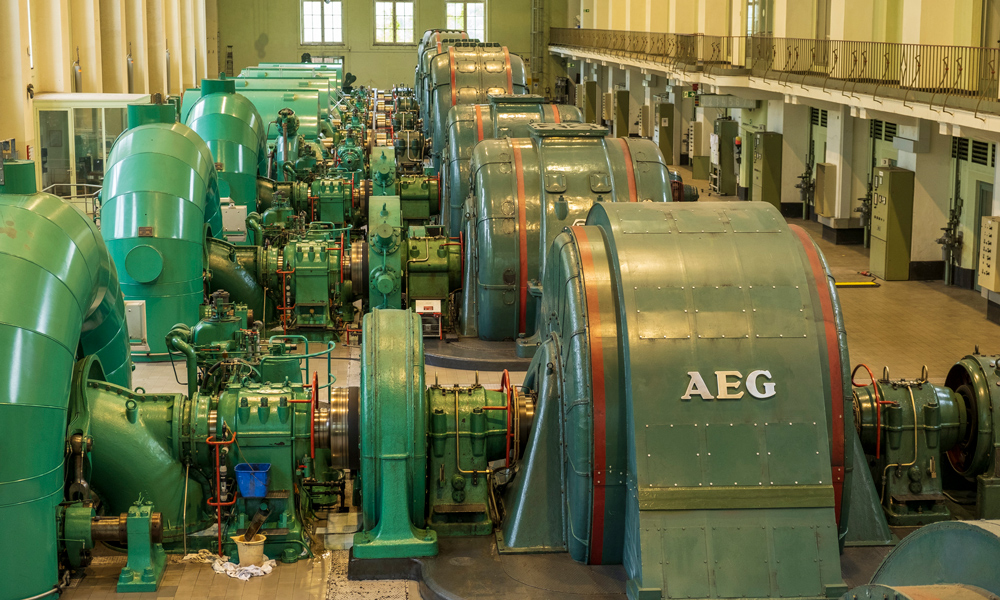 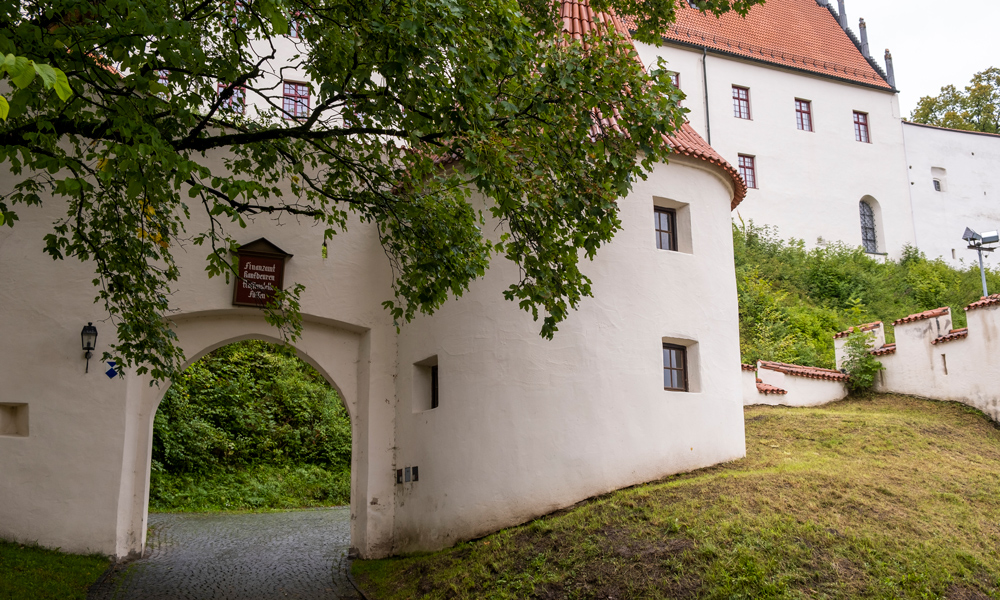 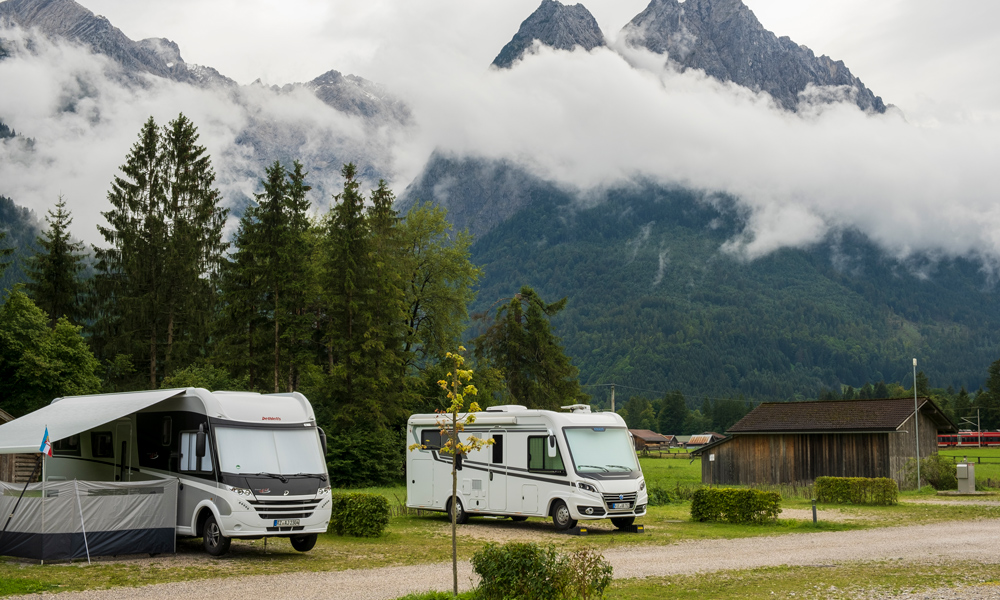 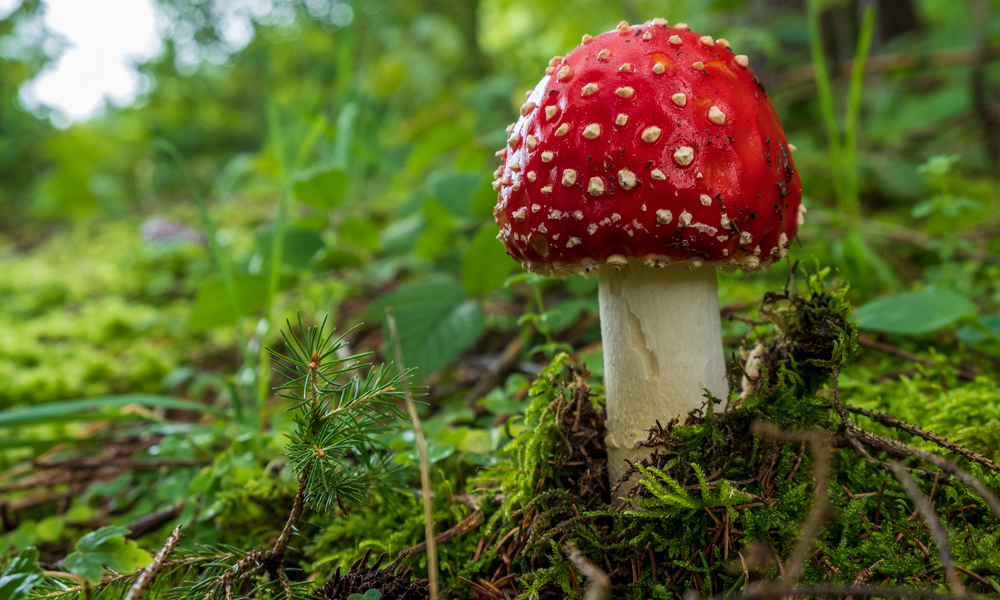 Alpensstrasse in Germany: Camping trip in the heights

Travel reports from abroad
Bavaria represents beer for some, nature for others. Or mountains, castles, Christmas markets, Munich, BMW and Audi. Or: This is where we go on a camping trip this time. The German Alpine Road is one of the most spectacular routes, and at the same time the oldest tourist road in Germany. We drive the route from east to west. The signs are on both sides, so the other way is also possible to travel.

We start the journey in the area around the Zugspitze, Germany's highest mountain. We say goodbye to the route 450 km away in Lindau by Lake Constance. So we drive straight through the northern Alps. With beautiful views, tasty regional dishes, monasteries, cows, churches and castles and much more. We visit both campsites and farmers with accommodation as a mainstay. It's the beginning of September. The many road works in Germany close roads, so we do not come to Berchtesgaden.

We find a campsite, Outdoor Resort Kaiser Camping in Bad Feilnbach. An extensive place with many facilities and only a few kilometers from the Alps. Of course, the restaurant has a "rough roof" right today, so I should probably have shopped a bit ... The next day I quickly found a road marked Alpenstrasse. But we do not get along very well, it is a diversion, and before I know it, I drive into Austria, and then cross the border back into Germany a little later.

In Reit im Winkl, I decide to look for the motorhome space, despite the lukewarm reviews in the Camper Contact app. Understandable, even though the place is beautifully located. The campsite in Reit im Winkl was a campsite a long time ago and is now used as a - somewhat dilapidated - motorhome site. The lady at the front desk tells us that the owner has plans to renovate the place, but that the mayor is blocking it. Because the owner is not from Reit im Winkl, she thought. You can dispose of garbage, drain the water and refill clean water. There are no sanitary facilities. In the evening I walk through meadows to the village in fifteen minutes, eat German and reasonably priced and listen to a concert full of marches in Kurpark.

Between Ruhpolding and Reit im Winkl are the Weitsee, Mittersee and Lödensee, which together form the Drei-Seen-Gebiet Chiemgau. This is one of Bavaria's most beautiful lake regions. There are many places to park the motorhome this September. I take a walk through the area and enjoy the beautiful landscape, the crystal clear water and the beautiful trout swimming in the water. Insects and butterflies are buzzing everywhere. Swimming is allowed in one place. At the Salz & Moor Museum in Grassau, you will get to know the importance of salt in previous centuries. Wood was used to heat the water to extract salt. When the wood ran out, it was decided to no longer bring the wood to the salt, but instead bring the salt to the wood. Therefore, from the beginning of the 1600th century, a salt water pipe was developed that pumped the precious moisture to Traunstein. In 1810 a new pipeline was laid in the direction of Rosenheim. To save wood, the pumps were powered by hydropower instead of steam. The pipes were made of wood and the salt water preserved this pipe street.

Camping Resort Allweglehen in Berchtesgaden has a beautiful location and is an award-winning campsite with terraces. At the bottom there is a parking space, at the top is the campsite. It is a short, steep climb, which you take after registration at the reception. It's a nice place, when I open the back doors, a fantastic alpine landscape opens up. This is how I want to wake up the next day!

The historic center of Berchtesgaden is also the place where “the lord with the mustache, Hitler, sought refuge in holiday and leisure. His "Eagle's Nest" can be visited via buses from Obersalzberg. I drive a little further to Königssee in Schönau. There I meet Richard Lenz, owner of Camping Mühlleiten, and second mayor of the village. His biggest annoyance is motorhomes staying illegally in parking lots at night. "We have been patient, but from now on we will focus on wild camping. Because so much dirt is dumped, and even chemical toilets are emptied in the streets, it stinks in many places" - says Richard. Closer to the campsite is a restaurant that is called Laroswacht.In Kreuth am Tegernsee is NaturKäserei TegernseerLand, where you can buy many dairy products, get a tour and of course eat something.In the basement you can see the room where the cheese ripens.

An important energy source in this region is hydropower. I take a look at Sylvenstein Lake, where I also meet the river Isar for the first time. My final destination this day is the RV park in Bad Tölz, right next to this river. Bad Tölz is a historic city just ten minutes walk from the motorhome site. Bad Tölz campsite is a separate part of a car park, no electricity, an overnight stay costs a few euros (payment machine) and you can empty the waste water tank and toilet. You only have to pay separately for drinking water. The ground is a kind of gravel and when it rains it sticks to your shoes.

The Alpine road continues south, between two lakes. It's been raining all night and still does. On Walchensee in Kochel am See there is an information center about Das Walchenseekraftwerk. - "A jewel of technology in the Alps" -, reads the mention of the power plant which is now a protected industrial heritage. The complex was built at the beginning of the 1900th century and is based on a 200 meter height difference between Kochelsee and Walchensee. Around 2000 people were needed for construction and building. On January 24, 1924, water flowed from Walchensee through a turbine for the first time. There are a total of eight turbines. Today, the Walchensee power plant produces 300 million kWh per year. No combustion, no noise and no CO2 emissions.

At Garmisch-Partenkirchen, there are always two events: the jumping competition on New Year's Day - and traffic jams! My TomTom Camper reports a delay of no less than 25 minutes on the road after Krün and suggests a detour that I decide to take. It's Almabtrieb in Mittenwald and that's probably the reason for the delay? I finally arrive at the Wohnmobilhafen Zugspitzblick in Grainau almost without delay. A comfortable place that offers water, electricity and even a pipe to flush the toilet. Also nearby is Camping Resort Zugspitze. A five-star campsite with private sanitary facilities next to the vehicle at some of the pitches. And above all a fantastic view of the Zugspitze, Germany's highest mountain with its 2962 m. This luxury has a price: For two people it will be about 60 euros for one night including electricity. The restaurant is open to everyone, with good food and a normal price level.

Wet in the hair

I do not mind a little rain. I am still considering cycling to a nearby Klamm, but this day the rain does not come down in drops, but in rays. Then you get wet in the hair. I decide to continue along the Alpenstrasse to Füssen. Dry and good while I feel sorry for the many vacationers on motorcycles and bicycles. The heat is on in the car, the music is playing and the wipers are the only thing I notice from the pouring rain. The view gives an indication of how beautiful it will be here with sunshine! I drive to Camper Stop in Füssen. A bit confusing, there are three motorhome pitches next to each other here. I take the farthest one, the one with a restaurant. It is a TopPlatz (German quality brand).

Biolandhof Schmid in Rückholz has a motorhome pitch with fantastic views. The clouds recede and the sky turns blue. I'm staying here for two nights. The day after arrival I go for a nice walk. In the shop there is self-service, included in the checkout, and I buy tasty yogurt and cold cuts. The place has no electricity, but there is a toilet. A little further on, at the campsite in Wertach, I am back on the alpine road route again. - "At this time it is busy in the region because of Viehscheid" -, says the campsite manager, as I am surprised that I can only stay one night. Viehscheid or Almabtrieb is when the alpine cows return from the mountains to the valleys where they are in winter. This is accompanied by an entry of decorated cattle through the village, costumes, farmers market, music and of course lots of good food and drink. I spend the afternoon cycling around Grüntensee on the recommendation of the neighbor at the campsite. There is also a beautiful campsite by the sea.

My last leg goes to Lindau. I do not like to travel into the city with the camper. To Lindau Insel, it is not even allowed with motorhomes. Again I choose a Landvergnügen (farm) in Tannenhof in Opfenbach. From there it is only twenty kilometers by bike to Lindau by Lake Constance. There was a small place that eventually had three campers in the garden. The bike ride to Lindau is very pleasant, through a beautiful rolling landscape. "Deutsche Alpenstrasse" is a great experience. Nowhere too steep and it actually goes well for all motorhomes. The road is 450 km long and can be highly recommended.