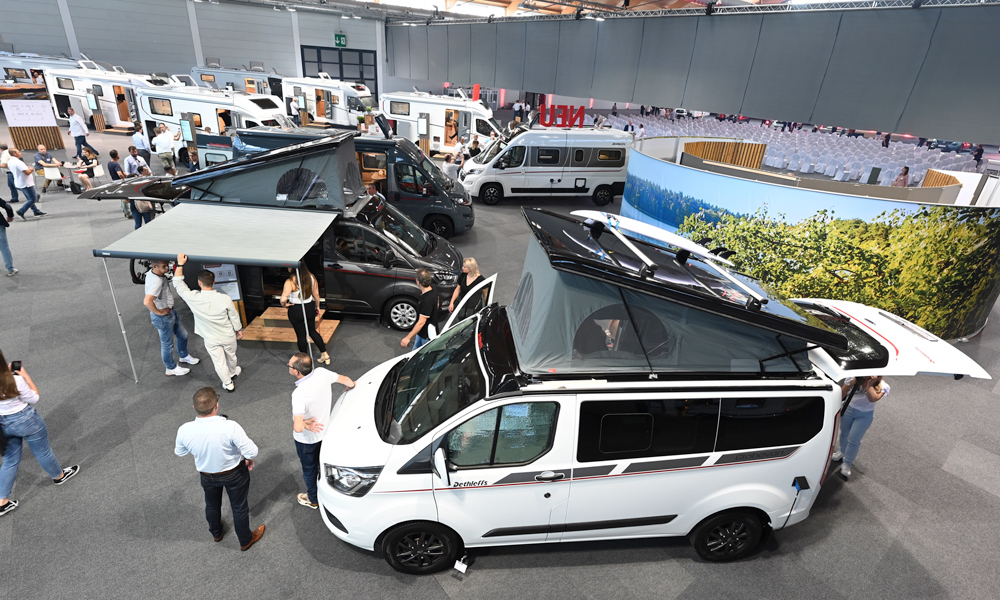 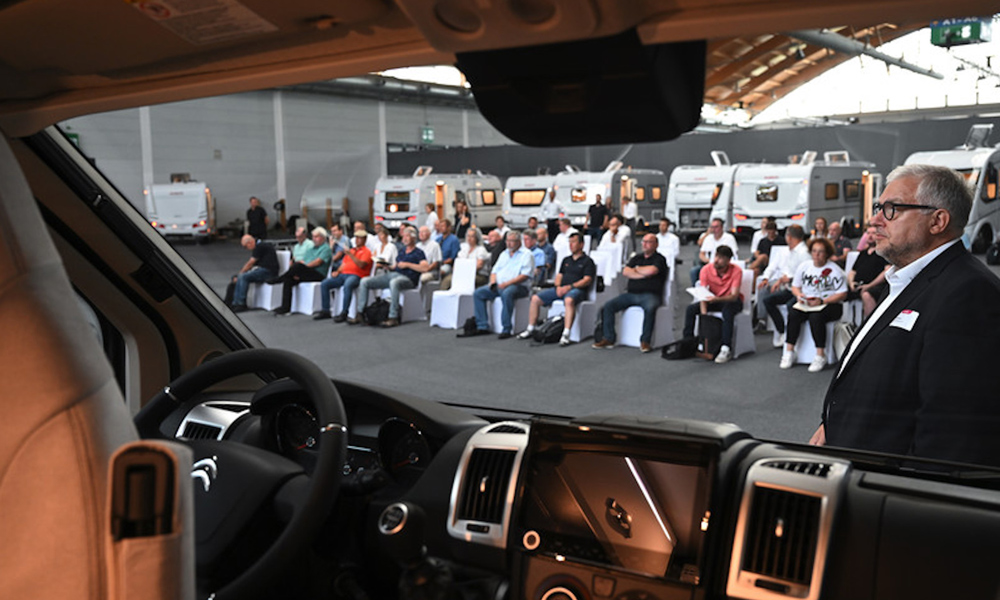 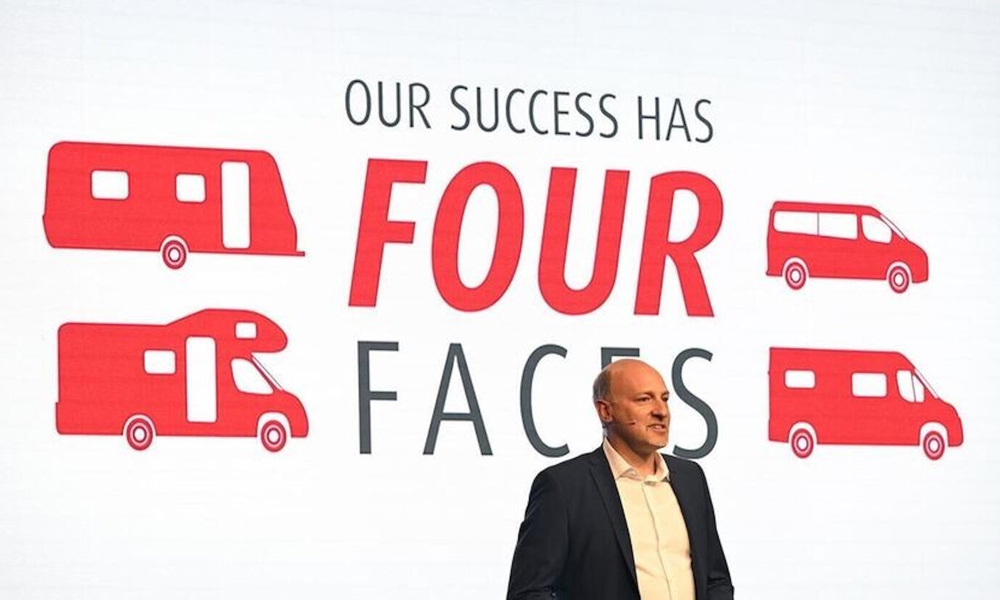 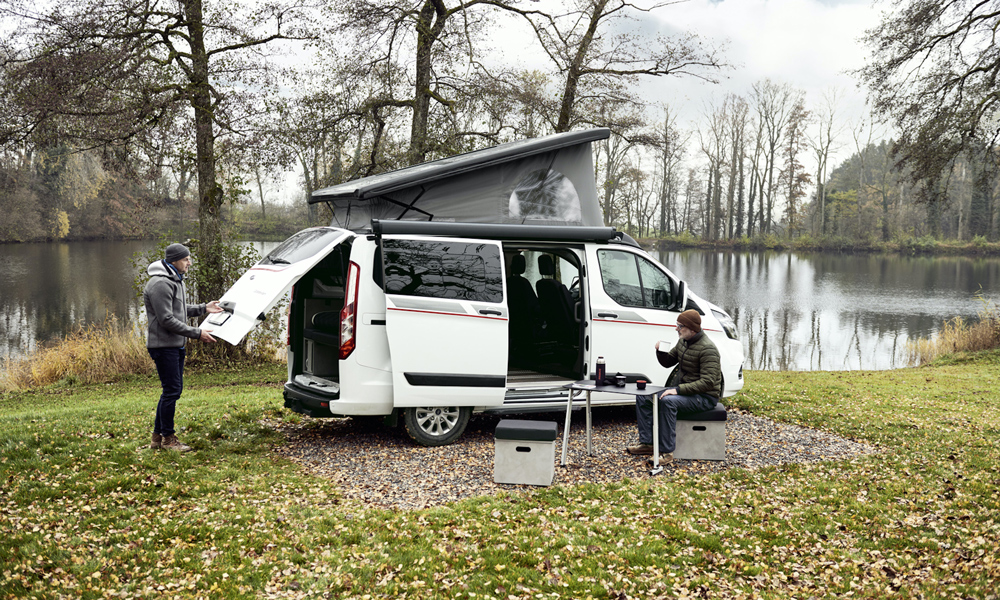 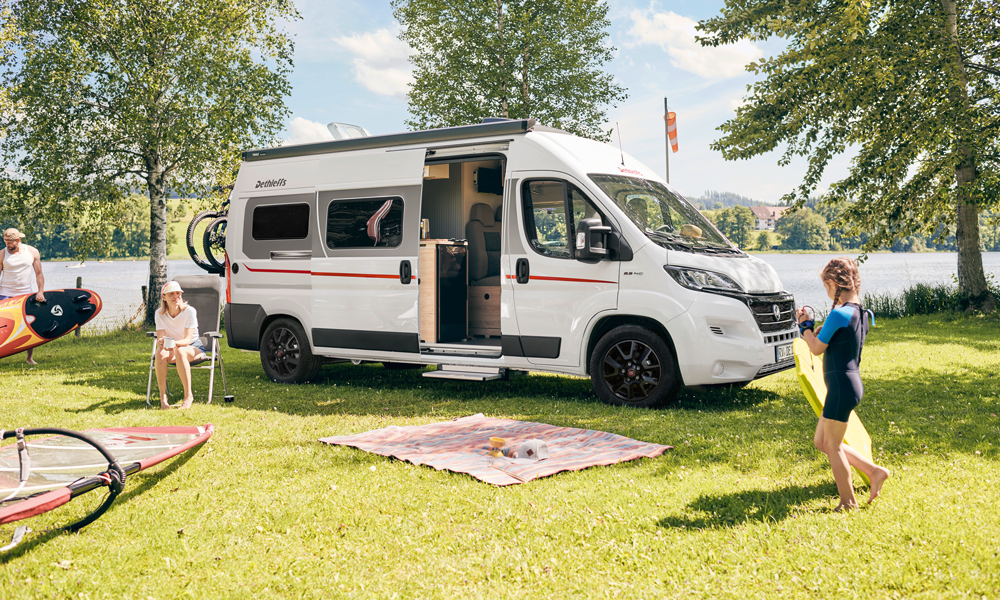 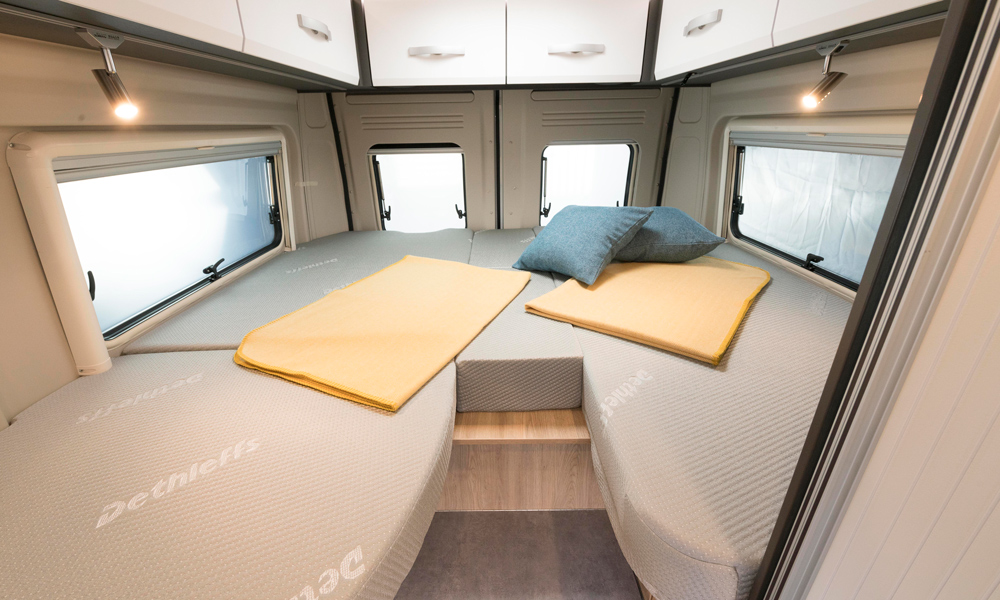 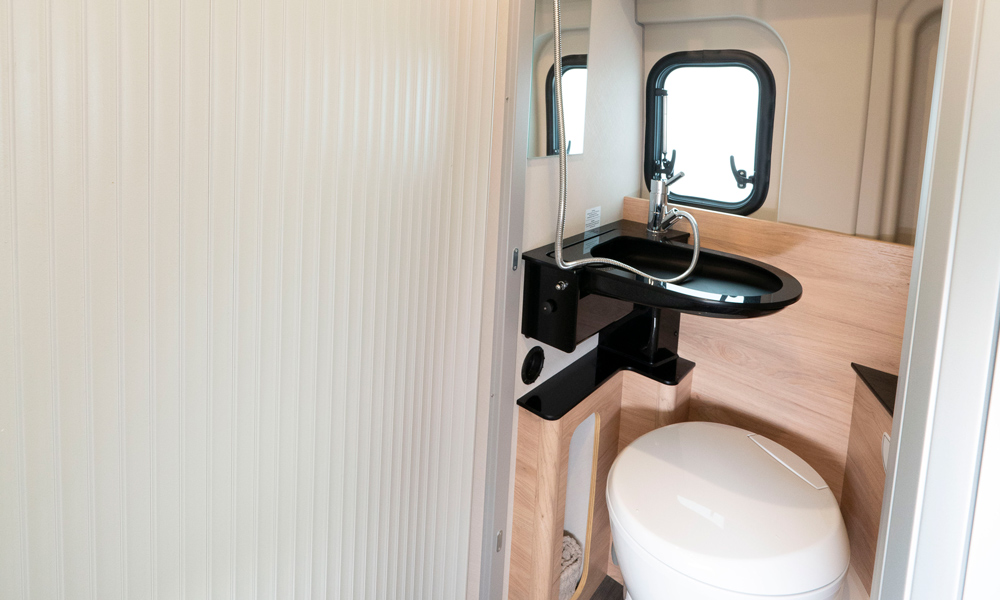 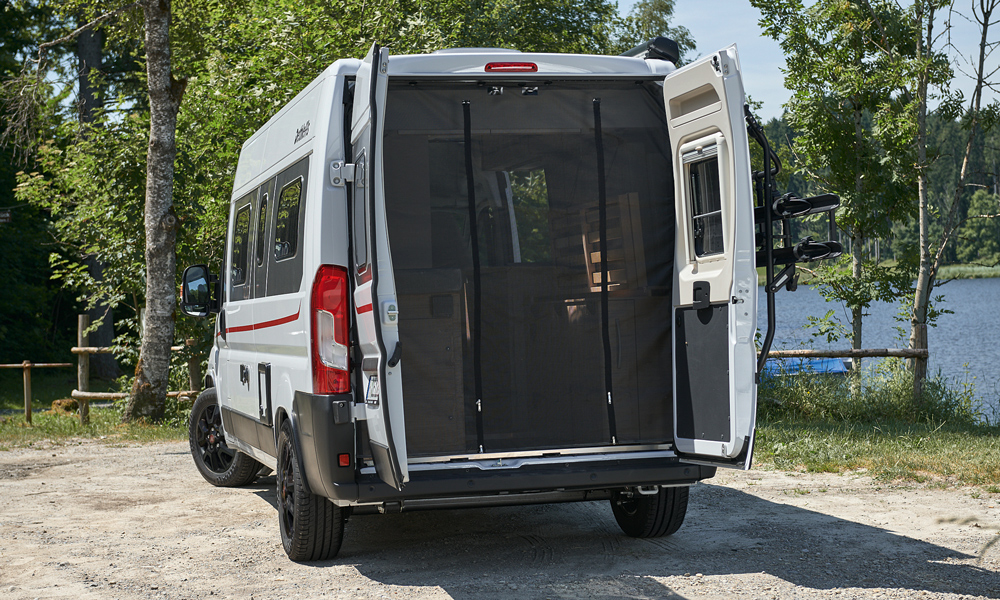 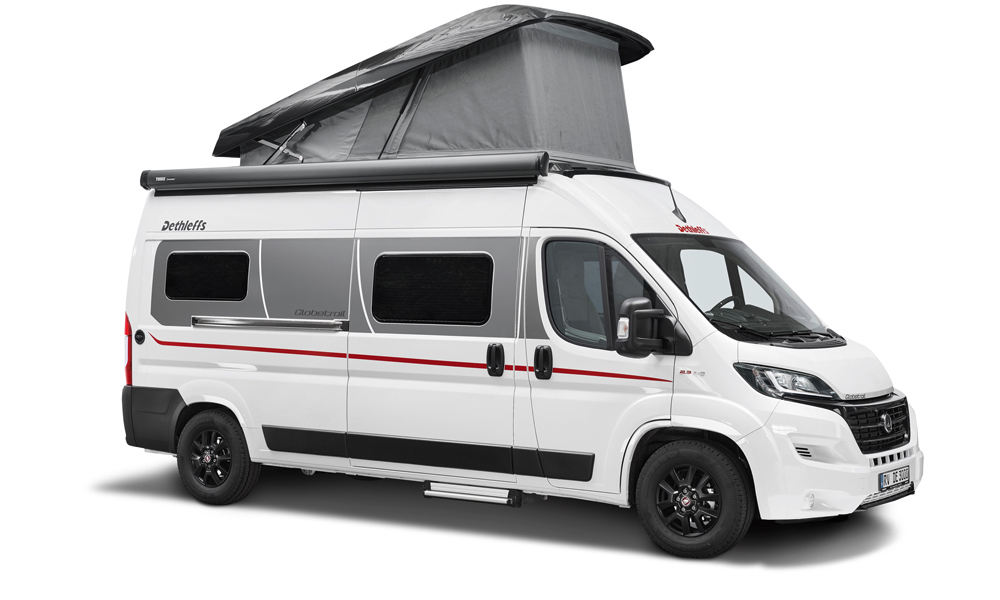 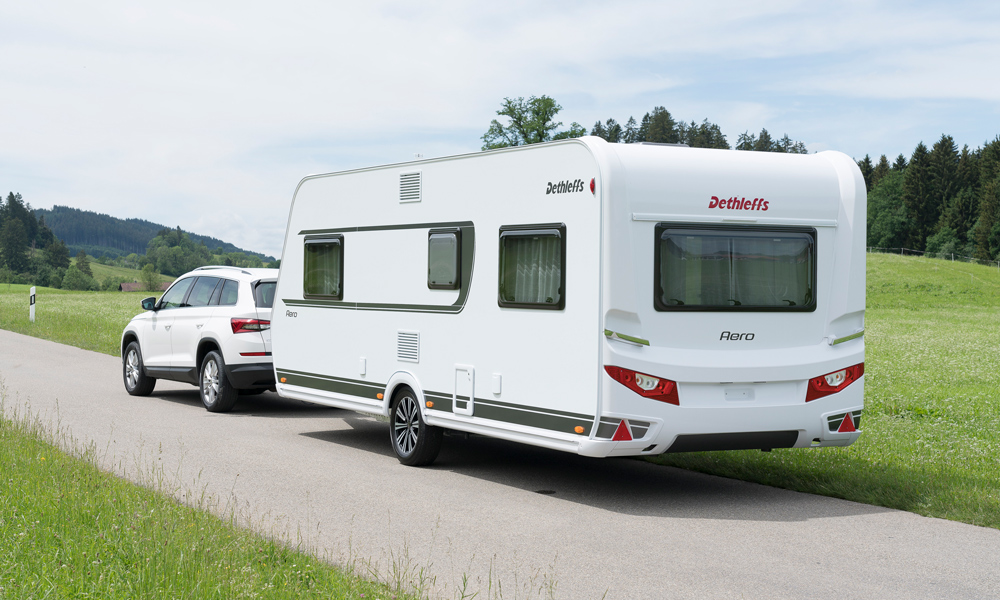 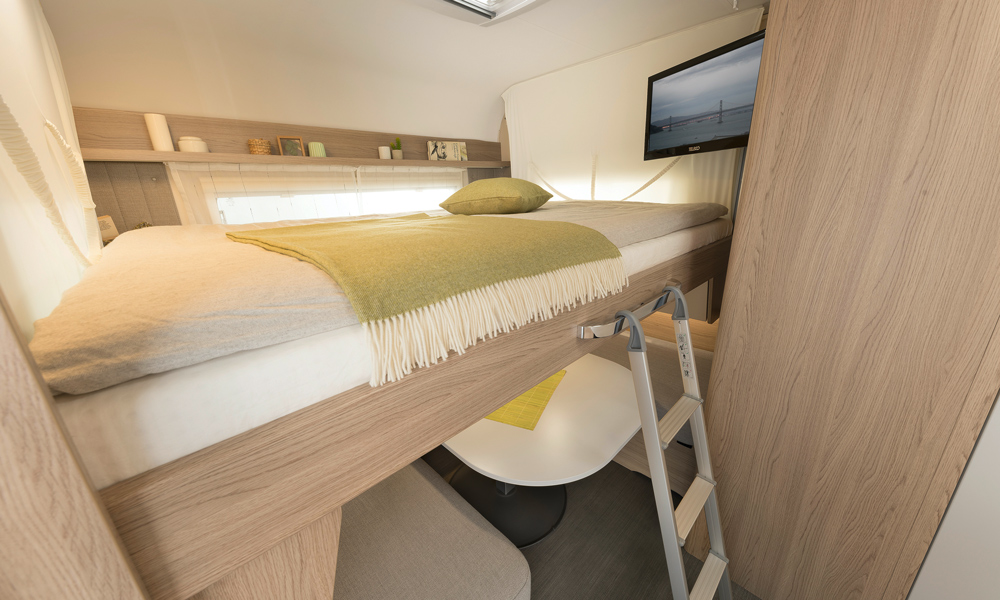 Market news
After several years of limited activities as a result of the corona pandemic, everything was ready for a grand event in Friedrichshafen. There, Dethleffs invited to the premiere of a number of new models at the end of June.

Finally, the time has come again for the motorhome and caravan manufacturers to present their news in a way that has years of tradition in the industry. When Dethlffs invited the world premiere of a number of products in a large exhibition hall in Friedrichshafen, the response was enormous. No less than five hundred dealers from all over the world, and around seventy international trade journalists were invited to a presentation of the company's 2023 models. Representatives from every single European country were present, and even from New Zealand there were enthusiastic visitors who wanted to gain an in-depth insight into the news from the German manufacturer of motorhomes and caravans. The meeting was planned to be a large dealer conference, at the same time that the trade press could also ask questions and get an insight into the way forward for the industry - seen from Detheff's point of view.

It was the head of Dethleffs, Alexander Leopold, who opened the conference where he was able to determine two very clear trends in the wake of the pandemic. The first is that many more people than before are seeking individual and more natural travel experiences than before. This has created a growing interest in motorhomes in particular. The pandemic has also led to major changes in how work is organized for many employees. Home offices, more flexible working hours and digital communication solutions have provided new opportunities for organizing leisure time and making short and long journeys. Another important element is sustainability. Motorhomes and caravans as a form of holiday appear to be very environmentally friendly compared to the vast majority of other ways of holidaying.

New groups - not least younger people - have opened their eyes to both motorhomes and caravans, but here too there is a clear trend to see. The compact "camper-vans" based on flexible but still large vans, are experiencing strong growth. The very latest trend is the smaller "urban campers", which unfortunately are not relevant for Norway due to our tax system. These are compact camper vans, usually with a raised roof made of tent cloth to gain internal standing height or beds, based on small vans. Compact dimensions and good operating economy mean that many European families choose this as a number two car, which can also function as an extra everyday car sometimes. Since 2021, these two vehicle groups have gained an important focus at Dethleffs.

When Bobil & Caravan Magasinet interviewed the head of imports to Denmark and Norway, Jens Hammer, earlier this year, he pointed out a threat, which Alexander Leopold also drew his attention to. Despite great interest from new buyer groups and solid order reserves, there are dark clouds in the sky. The corona pandemic caused major logistical challenges for industrial production all over the world. Component shortages and reduced production at many important sub-suppliers, combined with reduced transport capacity on planes and ships, have created major challenges. It does not help with good sales and full order books when production and deliveries are delayed.

Enthusiasm for the many new models was great, and seen from Norwegian eyes, it is the city motorhomes in the "Globetrail" series that are particularly attractive. This palette has been expanded with seven new models for 2023. One of these is the RL600, which with its length of six meters offers two single beds as standard and has a raised roof as an option. One of the spring's novelties was the launch of a number of new models based on chassis from Ford Transit. When Dethleffs now releases even more news, it concerns city campers based on the Ciroën Jumper, Peugeot Boxer and Fiat Ducato. Through this large number of brands, it is clear that Dethleffs is trying to remedy delivery problems by having several different suppliers.

We have already mentioned the Globetrail 600 RL as an important novelty. The two single beds are located at the back of the car, behind the kitchen on one side and the shower room on the other. The floor plan is quite similar to what we find in the 6,36 meter long 640 R. A movable circular sliding wall in the bathroom provides a full-fledged shower in this compact motorhome. Smart, but with a small drawback: When the shower is in use, it is not possible for anyone to move between the front and back of the motorhome. Among other specialties, we must mention a hand basin that folds in to save space in the bathroom, and a large mosquito net at the back of the car. This covers the entire opening when both rear doors are in the open position. Perfect if you want ventilation when the car is parked during the day, or you can sleep cool on a Norwegian summer night without being attacked by mosquitoes. For buyers who want a layout with a transverse double bed in the rear, Dethleffs offers the 600 H or 600 R models. All 600 Fiat-based 2023 models will get a 90th anniversary package with a large awning, exterior LED lighting , reversing camera, 16-inch alloy wheels and much more as standard.

The smallest Globetrail variant has a length of 5,41 meters and has a double bed across at the back of the car. The bed has a length of 2,09 meters from wall to wall and the width is 143 cm. If you want two more beds, this model - like the other variants - can be ordered with a raised roof. It is Dethleffs himself who is behind this construction. The sides of the raised roof consist of tent cloth, which includes both a separate dark cloth for sun protection and a mosquito net. The roof mechanism is easy to operate. An off-road variant is based on the Fiat Ducato. A hoop at the front and a slightly higher ground clearance reveal that this variant is designed to make progress on poorer roads. It is not known at the time of writing whether the car will get a 4x4 drivetrain, but the Stellantis group (which owns Citroën, Peugeot and Fiat among others) has several different vans with four-wheel drive based on a design from the French off-road vehicle specialist Dangel.

Two other novelties are so-called "S" versions of the models 600 and 640. It stands for "Schwenkbad" - which is simply that the wall to which the sink is attached can be swung to the side to provide more space in the washroom. This provides space for showering and toilet visits.

The Aero caravan series is being expanded with a small addition to the name and three new floor plans. The new wagons are given the additional designation "up". A novelty here is a pull-down bed that is placed above the salon. With the help of a couple of handles, this can be lowered when the evening comes and thus allows for up to 2,00 sleeping places within a compact format on the carriages. The bed is 1,44 meters x XNUMX meters without this taking up space in the pram during the day.